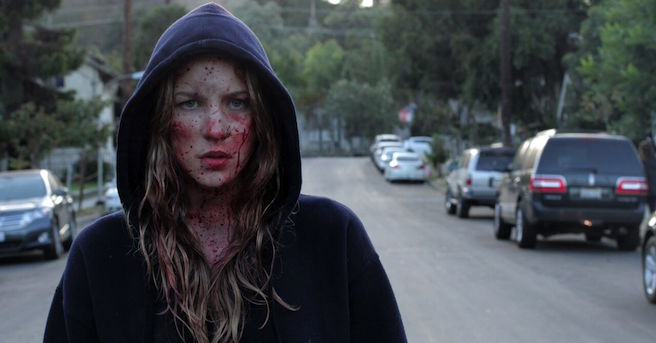 Synopsis: A  girl escapes the basement she was locked in, and seeks vengeance on her kidnappers.

A girl is trapped in a basement with no way out, waiting for someone to rescue her, not quite the concept that Jose Manuel Cravioto took for Bound For Vengeance.

The movie starts out with a girl chained inside some basement with a creepy guy peering over her. In mere seconds she manages to get a hold of a brick and smashes it across the kidnappers face, repeatedly. She takes the key and unchains herself. Well that was quick and simple. Movie over, right? Not quite. Eve (Tina Ivlev) tries to escape immediately, but finds out that she was locked away in the middle of a California desert. You’d think every cop would be roaming the deserts looking out for these huts filled with illegal activities.

Instead of fleeing as far as she could, Eve decided to go back in the house and torture the apparent kidnapper. After beating him down to near death, she agrees to a deal with him, where she would drive him to the hospital if he were to disclose all the locations of other missing women. One by one Eve goes to these sketchy locations to rescue the trapped women.

So Bound For Vengeance want to go rogue on the genre. Reversing the tables and having a female victim turned protagonist lead the charge. The big issue in this film is that while trying to establish a strong female character, they lost sight in the characters appeal to the audience. Simply put, Anna is not someone you want to root for. She comes away as an out of control vigilante. Her death toll is larger than any of the movie’s villains.

Even though she’s dealing with a bunch of bad guys who are sexual predators, it’s still puzzling why she has the urge to torture and destroy them at first sight. Blood keeps spilling, but the story doesn’t progress much. Every time she enters a new location to save someone, it becomes that much more mundane and predictable.

While some might view it as a notch for feminism and deem Anna a strong female character, all that violence she exhibits fails to give her much credence to her motives. The movie attempts to make a case that she’s fighting for each woman she saves from this sex ring. She befriends only one of the women she saves, Lea (Bianca Malinowski), the previous women she encounters consist of a girl who runs out of the house and impales herself, and a woman who was gagged with a mask that would make Bane look underwhelming, Anna ends up killing her also. What does Cravioto want the audience to take out of that? That just undermines the “heroines” purpose if she’s killing off the same people she’s attempting to save. Wouldn’t logic take over after the second or third crazy girl she finds and ends up killing, that it might be time to just stop the pursuit and GO CALL THE COPS?!

That’s what the movie is ultimately all about, search, find, kill, repeat.

It’s difficult to pick any character in the entire movie that the audience can root for. It’s just mindless killings with no apparent logical direction, even though the plot makes you try to believe that these women are worth saving and fighting for. They should be, but aren’t based on how they are portrayed as lunatics (especially the Bane mask captive).

Overall, there isn’t much direction or common sense with Bound For Vengeance. The opening sets up a promising story, but fails quickly. The kidnapper, played by Richard Tyson, is bleeding profusely from start to finish, after all the abuse he takes from Anna. With all that lost blood he’d at least lose consciousness if not die. He does constantly ask her to drive him to the hospital in return for the intel on the location of the captive women. After about the third house she goes to, without keeping her end of the bargain and taking him to the hospital, why would he keep feeding her the info? The odd thing is that the kidnapper is more of a sympathetic figure than the escaped captive. Bound For Vengeance only binds you for a meaningless ride along that serves little purpose. Rarely you end up disliking the hero, but this movie succeeds in doing that.

Additional Thoughts: I was disappointed with Bound For Vengeance. The concept had promise, but the execution was poor. The only thing Tina’s character had going for her was her looks, nothing else do take away. The ending was ambiguous and confusing. Still trying to figure out how this film was praised at the festivals. Guess people were overly sold on the female heroine. There seems to be a push for strong female characters, which is good, but having it shoved down our throat is an overload and it’s not that unique anymore.