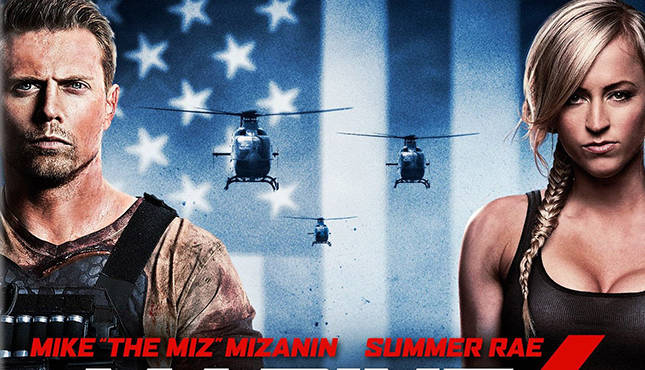 Miz: How are you?

Jim: Miz, this is your second go-around with the Marine. It’s one of the longest running WWE Studios franchise. What’s it like to be the face of it?

Miz: It’s an honor man. Not only to just do another movie, but to be the Marine again it means that WWE Studios has confidence not only in my abilities, not only as an actor but as a performer, to be really able to be the leading man and take it to new heights.

Jim: Summer, what is it like for you, being someone whose been around for a couple years on the WWE scene and now to be the first Diva to be in a WWE film?

Summer: Yeah, I was extremely humbled. When I first heard about it I didn’t really grasp what was happening, I thought I was going in to read for something. I was so honored to even read, but, “No, you got the part.” They all agreed, Vince, the studios. I knew I was given and handed an opportunity, but for me it was my work ethic and what I was going to do with it that would set me apart. You know so many women in the WWE locker room are smart, athletic, beautiful, capable to be in a WWE Studios film, so I just really want to prove that we can do it, give us a shot.

Jim: Sure, you’re not just a pretty face in this movie, obviously you have one.

Jim: You are kicking some butt.

Summer: Yeah, that was pretty cool not to be just the damsel in distress, nothing wrong with that. Be Miz’s love interest.

Miz: You’re not fit to be the Miz’s love interest, just like every other girl in the world.

Summer: That’s why the women wanna kill him all over the world.

Jim: Miz, you’ve done this once before in addition to other film work. What’s the transition like from the ring to the big screen. Is there something to take away from your ring performance and your time on The Real World, but to be like in a film with a big set-up?

Miz: WWE prepares you for everything, every situation I mean. You gotta understand that every week we film live TV where you only get one take. You have to go out there and the audience could affect your performance because they’re involved. When you go to the set you don’t have that audience anymore that will tell you whether you suck or you are amazing. You are also not playing for the last person in the last row, you are playing for a tiny camera. There are differences, but WWE gets you ready for it all.

Jim: Summer, was film something hard for you to transition to. You’ve had camera experience on Total Divas in addition to WWE. What was it like for you to venture out to a movie set and do a movie like that?

Summer: Oh yeah, it was a whole different experience. people started talking and abbreviating everything, I was like what’s that mean? What’s this? It was nice to have Mike to ask some really silly stupid questions like, I don’t know what DOP means? Or what is that? He would tell me, and now it’s funny because I find myself watching the credits of movies now. I just learned so much in in 4 weeks, I just hope one day I use the information I learned and be able to be a better version of myself.

Jim: Miz, it seems like you are having a lot of fun on WWE TV, working as the heel and doing the Hollywood gimmick. Is this one of the most fun you’ve had in the ring in a long time?

Miz: Yeah, I’ve been having a lot of fun doing this. When I got done doing Marine 4, I was like, man it would be so much fun to come back with that Hollywood guy that thinks he’s the biggest actor in the world. You hear about them all the time. All the news from the ex-Hollywood, the extras, you hear that this person didn’t make it to a show because he was exhausted. You don’t hear about actors and how they’re actually termed, like he was method acting and had to be Abraham Lincoln the entire time on set and everyone call me Abe. You know I mean, that’s just so amazing for a WWE character to be. I was like that’s going to be me, I’m going to be that guy. I literally watched Tom Cruise interviews for days on end, I was like this is going to be me.

Jim: It has transitioned well to television, and Summer you debut as a valet with Fandango then transitioned to more of a performer. What’s the path you are hoping to take. Are you going for the Divas title, what’s in store for you next?

Summer: Yeah, of course I would love to get into the Divas title picture. I loved my time with Fandango, I loved being in that role on TV. Being in that role on TV and having to kiss, being able to develop and fans care about you so much more if it’s about relationship. Even if I break up with a guy on TV, or if he breaks up with me it’s something. I think a lot of time if it’s just matches and you are just wrestling that’s very hard, especially for girls. I love being in a storyline in anything. This is WWE, you never know what you’re gonna get the next day. I forget what I ate for dinner last night. You gotta see what happens on RAW on Monday.

Jim: This is for both of you, do you guys personally see yourselves transitioning to a film career, is this something you want to do full-time?

Summer: With WWE Studios coming on, and Michael Luisi having WWE Studios with such a loyal fan base, our fans are just so supportive of us. Of course if I ever had the opportunity to do something at WWE Studios or another movie role again, I would love to show what I learnt. One of the things where I would love to show how much better I could do this time. We are all critics of ourselves, but you know there is nothing better than being in front of a WWE crowd. Hearing the fan reaction of 50 thousand people is just insane and instant gratitude. I definitely love my job as well.

Jim: How about you Miz?

Miz: For me, if you look at what the Rock has done and Dave Bautista, it’s truly incredible. When they come back to the WWE they bring back new audiences and so many eyes to watch WWE, and that’s exactly what I want to do. You always wanna come back to WWE because that’s the home, the dream, the passion. I just love doing WWE, but do I want to do films? Absolutely, it’s so much fun. I can do everything.

Jim: Final question for you guys. You will have the Extreme Rules PPV in Chicago. Which is where I’m living, based from, my hometown. What’s it like to perform for the Chicago crowd, that’s usually amp’d up?

Summer: You live in Chicago?!

Summer: That’s where I live!

Summer: Are you Gino’s East (pizza), Pizano’s, what are you?

Summer: Chicago crowds are like no other. Allstate Areana is just insane. Miz will do amazing there, because they are a heel crowd, they like the bad guys there.

Summer: They hate you! Really?

Jim: He’s still the only heel they don’t like.

Miz: You know you are a real heel, when even heel crowds don’t like you.

Summer: That is true, they loved Fandango. I played for the Chicago Bliss in the Lingerie Football League, so whenever Fandango and I were there, we definitely felt the love. I love Chicago and I love our fans.

Jim: Good luck with the movie and in your WWE careers going forward.

Miz: Thanks man, appreciate it have a great day.

Thoughts: Summer Rae came across as super personable and nice. Far removed what her TV portrayal and rumors seem to pain her as. I was impressed. She seems to have the right attitude about the film business, and might just be someone who can make it one day, she still has a lot of work to do based on her limited experience. Miz, is exactly what I expected him to be. I’ve seen him enough over the years on reality shows and WWE to know that his in-ring persona somewhat resembles his personality. Still seems like a solid guy. Think he’s really improved in his acting, even though he has starred in many C list movies. A film career is not out of the question for him, as his WWE days of in-ring competition seems to be winding down. Three way interviews can sometimes be difficult, but these two were on point. Fun chat.


The Marine 4: Moving Target is available on Blu-ray and DVD everywhere.