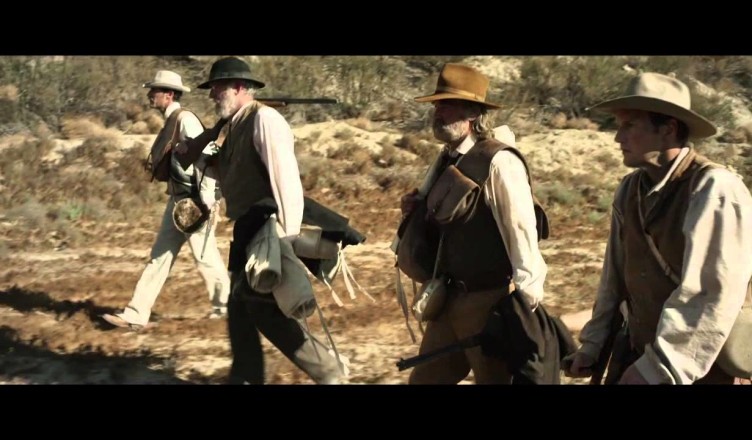 Four men set out in the Wild West to rescue a group of captives from cannibalistic cave dwellers.

Bone Tomahawk released on December 10th of last year, and yet I didn’t catch it until a week ago after a friend nagged me to check it. As it turns out, the best movie from 2015 is a movie I missed in 2015. But that doesn’t mean I won’t amend my Top Ten list. I’m a film critic. I can do what I want. First-time director S. Craig Zahler’s modern spin on the classic western isn’t much of a “spin” at all. It’s a genuine attempt to make a western for contemporary audiences. And it works quite well. But what makes it so good as to have it leapfrog my favorites films from last year? It comes down to fun. I had so much fun watching Bone Tomahawk, even if it were littered with technical flops, it wouldn’t have mattered. Luckily, Zahler appears to be a very talented filmmaker.

Let’s get the plot out of the way. Two murderous drifters (played by Sid Haig and David Arquette) cross paths with some savage cannibals in the middle of The Old West. One suffers the familiar fate of Drew Barrymore in Scream, while the other escapes and finds his way to the small town of Bright Hope. He buries his belongings and hits the bar, only to run afoul of the local law. Sheriff Hunt (Kurt Russell) and his Junior Deputy, Chicory (Richard Jenkins), have a chat with him, which ends with the drifter needing medical attention for a bullet wound. The doc’s assistant, Samantha (Lili Simmons), comes to his aid, much to the chagrin of her husband, Arthur (Patrick Wilson), who is laid up with a broken fibula (or maybe it’s the tibia—it’s part of the mystery as to which). But a broken leg is nothing when you wake up in the morning to learn cannibals have abducted your wife, and grabbed the drifter and the actual Deputy on their way out of town, too. Arthur takes his Tiny Tim-esque crutch, Sheriff Hunt, Chicory, and a smarmy sass master with a passion for killing Indians, Brooder (Matthew Fox), to make the journey to get them back before they are killed and/or eaten.

Bone Tomahawk is a horror-western, and I didn’t think those two genres could go together so well. Keep in mind that this isn’t a horror movie dressed in western garb. It’s very much legit. And I appreciated not having to suffer through an overtly self-aware, frivolous film, like an Abraham Lincoln, Vampire Hunter. It’s nothing against honest Abe. I just don’t want to get stuck watching some piece of trash that’s trying too hard. But Zahler is all business, crafting a genuinely old school film. This is as close to a classic western as any modern western has gotten. It’s all about manliness, hunting Indians, and saving a lady in a precarious state. It’s a twisted version of The Searchers with the buddy flick essence of Rio Bravo. Though the horror element is shoehorned in, the stark tonal shift fits. The bad guys in this movie are terrifying and gruesome—much more so than Henry Brandon was even with the headdress and tan. It doesn’t hold back one bit. The cannibals are referred to as “troglodytes,” in a facetious deke of the PC Police (though I doubt the PC Police are hip to this mangy puppy), and they are just plain freaky. The “trogs” are bone-through-the-nose savage Indians, and while I wouldn’t recommend it for PBS, anyone willing to thumb their nose at polite society for a couple of hours will be able to move past it. 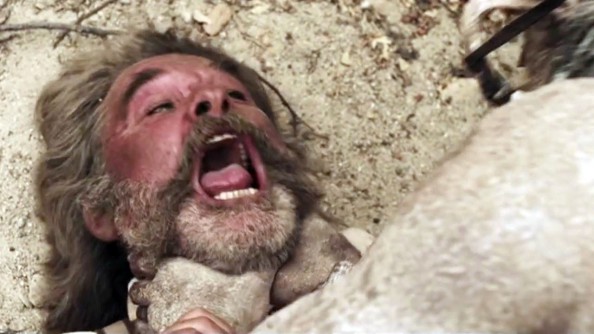 The writing is line-for-line perfect, quotable, and boss. It’s also damn funny. Yay! Zahler can really write it up good. The humor, which is surprisingly dry, sometimes displays an edge of Seinfeldian influence. A conversation about how hard it is to read in the tub, or whether or not the fleas in flea circuses are actually alive, are so steeped in the randomness of everyday chatter that they actually make me believe these characters exist in some alternate universe where Bright Hope is an actual town, and where cannibals are a credible threat. Out of great writing come great characters.

Arthur, for example, is both the manliest man and the Charlie Brown of The Old West. With his broken leg, he insists on doing his wife “the right way,” meaning maneuvering his gimpy butt on top. But watching him hobble behind the rest of the crew as he tries desperately to keep up is somewhat pathetic—it’s the chivalry alive in the old west with the hopelessness of a sitcom dad. The fussy old fossil, Chicory, is a widower who hasn’t totally recovered from his loss. Long pauses and far-off stares express more about his emotional state than a million flashbacks. Of course, the cast deserves a good deal of the credit. Arthur’s exasperation would be nowhere without the baby-faced determination of Patrick Wilson. And Matthew Fox is the right mix of badassery and foppishness to fully illustrate Brooder’s excessive cockiness. But Richard Jenkins, as Chicory, is perhaps the best pure performance in the film. He transforms the pathetic-but-loveable-geezer into the bedrock of the film’s goodness and bravery. Jenkins is so earnest in every wince of inner turmoil and when flashing his reassuring smile. He hunches, he shuffles, and he must have used the help of a chemist to find the right shade of gray for his hair—or maybe it’s just natural. Either way, it’s simply an amazing performance.

And then there is Kurt Russell as Sheriff Hunt. This isn’t a John Wayne impression (as one critic I read wrote of Russell’s role in Tarantino’s The Hateful Eight). It’s a subdued, controlled performance as fine as any I’ve seen in recent memory. I will always, for some reason, first and foremost associate Russell with Captain Ron, but he is coming on strong in the later stages of his career. His performance as “The Hangman” John Ruth in The Hateful Eight was as loud as it was soft, a mix of bombastic Tarantino-isms and inspired personal touches. Here he is the whip smart, confident, smoothest operator. That’s two westerns in one month, in some ways diametrically opposed, in others eternally linked, and Russell owns in both. 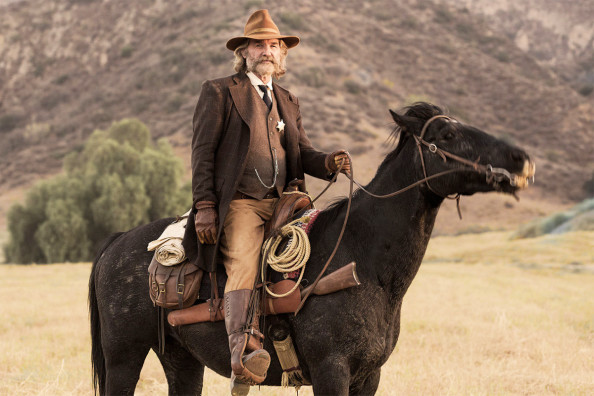 Seeing Chicory say goodbye to his wife before the journey, visiting her sweetly manicured tombstone, is captured in a long shot with a backdrop of lush greenery. It evokes that painterly quality so many look for as a signifier of artful moviemaking. But Zahler and cinematographer Benji Bakshi played this one cool. Events unfold in a string of patient, static shots. The mood is calm and calculating, mimicking the “man’s gotta do what a man’s gotta do” vibe essential to this film, and really to most any western worth its salt. This is right up there with Carol, Bridge of Spies, Phoenix, and every other movie from 2015 sporting a classic approach. I’ve been a proponent of the classic style, but aside from Bridge of Spies, I wasn’t as entertained by any apeing of said style as much as I was in Bone Tomahawk.

For those who don’t squeal in delight at classic filmmaking, there’s some of the most nightmarish violence this side of Cannibal Holocaust. If I had nightmares about anything other than my future, it’d be this kind of stuff—troglodytes hurling cleavers fashioned out of bones at my head, and pregnant women with their limbs chopped off (as if pregnancy needed to be more challenging). This is a western where the scariest thing is not a gun being brandished, but a bone tomahawk wielded by an extra from Apocalypto.

Bone Tomahawk is like Clint Eastwood’s Unforgiven meets the 2006 version of The Hills Have Eyes. In some ways, I wonder if this is the kind of movie Quentin Tarantino would want to make. It’s not necessary to compare them, but QT championed the film on Bret Easton Ellis’ podcast, and it certainly has the genre manipulation Tarantino has become famous for. Though Tarantino will forever be a master of pastiche, an impresario of prodding violence and provocative politics that seems to snicker at us as much as laugh with us, he may very well be unable to reach this level of pure enjoyment and completeness at this stage in his career. Zahler has a lot in common with Ty West, the brilliant scare maestro who brought us modern horror classics like The House of the Devil and The Sacrament, movies that, too, entertain with ferocity while proving steeped in the lessons of old horror masters. At the end of the day, I want to leave a movie wishing to see it all over again right there on the spot. And only the movies that deliver the best time at the theater get me to that place. I will put Bone Tomahawk at the top of my list from last year, because it is one of the few films I’ve seen lately to leave me purely, unobjectionably happy. And boy is that rare.