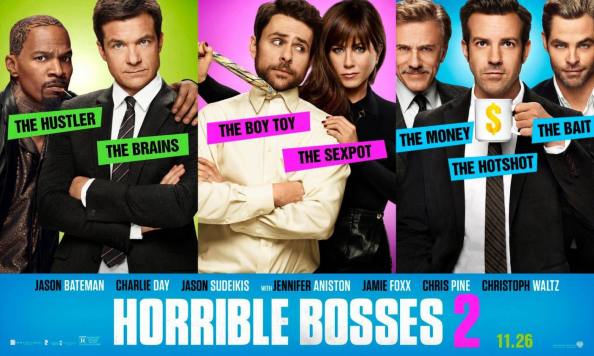 Synopsis: Dale, Kurt and Nick decide to start their own business but things don’t go as planned because of a slick investor, prompting the trio to pull off a harebrained and misguided kidnapping scheme.

Comedies seem to be getting sequels left and right. Anchorman, Dumb & Dumber, and even the more recent 21 Jump Street all received a sequel. With the addition of Horrible Bosses 2 to this list, there seems to be some common ground when assessing these types of sequels. Generally comedy sequels do not surpass the first film but they can provide much of the same humor that you may have originally enjoyed. I would say this rule of thumb applies to Horrible Bosses 2. While I enjoyed the film on a purely humor-based level, the plot, theme, antics, and humor are essentially recycled from the first film.

The one part of the plot that is different in Horrible Bosses 2 is the crime being committed. Instead of murder, Dale (Charlie Day), Kurt (Jason Sudekis), and Nick (Jason Bateman) move to kidnapping instead. After attempting to sell an idea to go into business for themselves, they are taken advantage of and resort to kidnapping to save their business. From this point, the film follows a lot of the same mechanics we saw in the first film. The main characters are still the foolish criminals that they were in the first film. They even resort to asking for advice from Mother F*cker Jones (Jamie Foxx) once again getting most of the same “bad” advice that they received. In addition to Jones, Harken (Kevin Spacey) and Dr. Julia (Jennifer Aniston) randomly find their way back into the mix as well. Throughout the film, the kidnapping was the only aspect of the film that was a change but despite the similarities, I still found myself laughing throughout the film.

One thing that the Horrible Bosses 2 did for me was highlight where the star power was. The first film had that element of surprise that gave every character an edge. With that surprise gone, the comedic attributes of the characters had their chance to shine. By far I would say that Dale (Charlie Day) is the star of this film. Charlie Day has a comedic presence that shines throughout both Horrible Bosses films and I think that his charisma will take him very far in comedy films. Kurt (Jason Sudekis) is the perfect counterpart to Dale. Jason Sudekis reminds me a lot of an early Vince Vaughn with his bits of slapstick comedy mixed with that cool edge. Combine that with Charlie Day’s over the top antics and you have a perfect duo for these types of comedies. Unfortunately Nick (Jason Bateman) is a bit lackluster in this film. Jason Bateman has been playing the same character for a long time and it’s starting to wear thin. He had his moments of humor but it does not compare to the chemistry of Day and Sudekis. As for the rest of the characters, they just seemed out of place. While I enjoyed the roles of Kevin Spacey, Jennifer Aniston, and Jamie Foxx from the first film, they really suppressed this film’s ability to evolve. Bringing more focus to Chris Pine and Christoph Waltz’s characters would have served this film better by taking a comedic risk rather than playing it safe.

The same humor but also the same laughs!