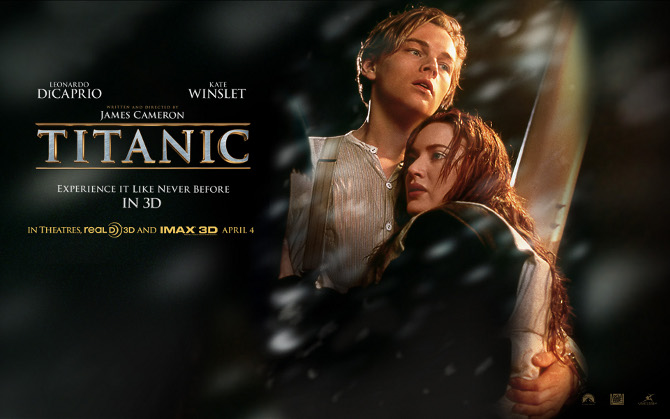 On September 10, 2012, Titanic 3D will make its BluRay debut in an impressive four-disc format for your home viewing pleasure. While opening in theaters in the spring, the film grossed a decent amount of money for a classic film re-release. Titanic was the ravishing James Cameron romantic historical drama which flawlessly recreated the historical moments in time and the climatic sinking of the ship. It went on to win a boatload of Academy Awards and became one of the highest grossing films of all time. Here is the press release:

FOR THE FIRST TIME EVER ON BLU-RAY™ 2D AND 3D

With More Than 2 ½ Hours of New Special Feature Content

11 Academy Awards®, TITANIC, makes its highly anticipated debut on Blu-ray 2D and 3D on September 10, 2012 from Paramount Home Media Distribution.  Available in high definition for the first time ever, James Cameron’s timeless and unforgettable tour de force will be presented in stunning 2D and 3D, providing a cinematic in-home experience of TITANIC like never before.

Presented in a four-disc 2D Blu-ray/DVD combo pack with Digital Copy or, for the ultimate experience in fully immersive 3D, in a four-disc Blu-ray 3D and 2D combo pack with Digital Copy, this high-definition presentation of TITANIC is a must have for film fans’ home media collections.  Both sets feature more than 2 ½ hours of new bonus footage never-before-released on disc, including a fascinating in-depth exploration of the film with James Cameron, as well as documentary footage produced by National Geographic with James Cameron that brings the world’s leading RMS Titanic experts together to solve the lingering mysteries of why and how the “unsinkable” ship sank.

The sets also boast additional special features including 30 deleted scenes, over 60 behind-the-scenes featurettes, a look at the groundbreaking visual effects, over 2,000 photos, three commentaries and much, much more.  TITANIC will also be available in a two-disc DVD set with deleted scenes and, for the first time ever, for digital download.

Starring Leonardo DiCaprio and Kate Winslet in the roles that would make them global stars, TITANIC tells the story of the epic romance between two star-crossed lovers set against the backdrop of the legendary and ill-fated maiden voyage of the “ship of dreams.”

The newly released Titanic BluRay DVD Combo pack release promises to be the ultimate collection for diehard fans of the epic Titanic.