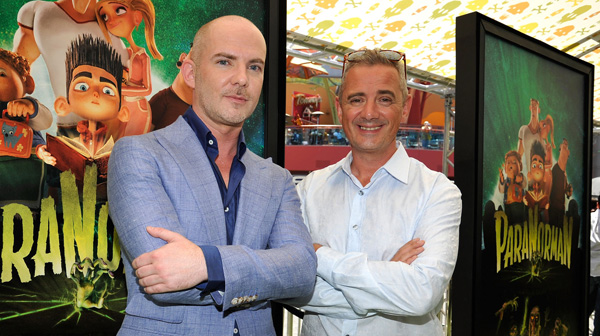 “ParaNorman” is the animated stop motion, full-length feature debut from Chris Butler and Sam Fell. Chris Butler’s recent movie making experience was working in the art department for previous ghoulish stop motion films such as “Coraline” and “Corpse Bride.” Sam Fell co-directed both the animated “Tale of Despereaux” and “Flushed Away.” Both these filmmakers have combined their talents to collaborate on “ParaNorman” in what has been described by them as a “combination of John Carpenter and John Hughes.”

For a children’s film, “ParaNorman” is irreverent and far from being politically correct nor sensitive to typical children’s emotions. To be fair, this is a zombie film that caters to brave children and the adults who enjoy the zombie/horror genre. Full of intensity, “ParaNorman” is savvy with clever genre references and captured a dreary mood. For a children’s film, it takes its audience on a fun, yet turbulent ride. I spoke with both Chris Butler and Sam Fell about using stop motion, directing their first full length feature, and previous experience which brought them to this point in their careers.

An animated film where the main protagonist, Norman, is an 11-year-old boy who can interact with the dead was originally conceived a few years ago as a basic thought in need to get off the ground.

“This started many years ago and the intentional concept for a zombie film for kids,” says co-director Chris Butler. “Wouldn’t it be cool to reference zombie movies and what it’s like being a zombie?”

And “ParaNorman” was in fact “inspired by the stop frame animation and great technique to bring zombies to life.” said co-director Sam Fell. One of the challenges in directing a first film is setting high expectations and avoiding just as high risks. Being involved in successful films can also increase the pressure to succeed artistically and commercially. When a filmmaker directs their first film various emotions arise. These raw emotions can be as frightening as the tense thrills presented on screen in “ParaNorman.” Displaying confidence with previous storyboard experience as well as familiar stop motion technology made the transition smoother for the duo.

Fell also admitted that storyboard experience helped him, too. Yet being able to work with an old film technique to make it feel fresh and new again made Sam Fell comfortable.

“We made a great team with the story background,” said Fell. “It was amazing to come back to stop motion being away in the digital medium. Using such modern technology plugged into to old technique was liberating.”

As with making any film, a director stumbles upon certain challenges. This can be amplified when directing an animated film. Thankfully, both Butler and Fell embraced specific, previous experience from “Caroline” and “Despereaux” to serve them as a guide to maintain the creative energy found in “ParaNorman.”

“One of the big challenges is the spontaneity,” said Sam “It’s such a long drawn out process that’s all very planned…I had a lot of fun doing comic action sequences. I had to work with Gary Ross on ‘Despereaux’ with lenses and camerawork which prepared me for this.”

Butler also understands the experience of organically constructing an original story as a way to communicate original and knowledgeable filmmaking to an audience.

“’Caroline’ was great unique experience because [director] Henry [Selick] had a singular vision,” said Butler. “It wasn’t a boardroom full of executives. And that was the approach used to make a single voice.”

“ParaNorman” is in theaters NOW!