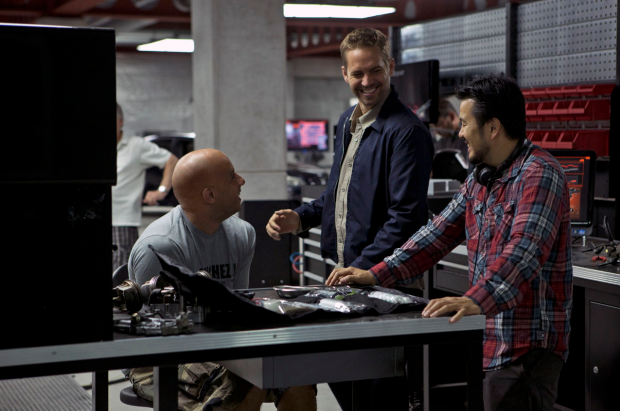 Fast Six is well into production with Vin Diesel, Paul Walker, and Dwayne “The Rock” Johnson all reprising their roles and reporting to the set. A lot of people I know really enjoyed the last film, Fast Five, with some proclaiming it the best entry in the franchise and the next stepping stone for creating franchise longevity by switching genre’s from films about illegal street racing to theft and high action heist. It’s an exhilarating idea with a few of the concepts carrying over into new films to maintain a sense of continuity and thematic exploration that was worked wonders for the franchise thus far. A lot of the success of the last film has been attributed to director Justin Lin who handled directorial duties on the last film exploding his career into new and exciting territories putting him in high demand and acquiring new-found recognition. A pair of set photos have appeared online for the film featuring the director as well as a few stars from the film and are available to view below:

I like that everyone seems excited for what they’re doing. I like the enthusiasm for the franchise from everyone involved and I enjoy  a great deal of pleasure from watching this franchise as it flourishes. This film will be a measure of director Justin Lin’s ability to maintain popularity and I believe this film has a great possibility of delivering on the hype. Can’t wait to see what cars are pulled out to showcase this one.

One thought on “A pair of ‘Fast Six’ set photos”