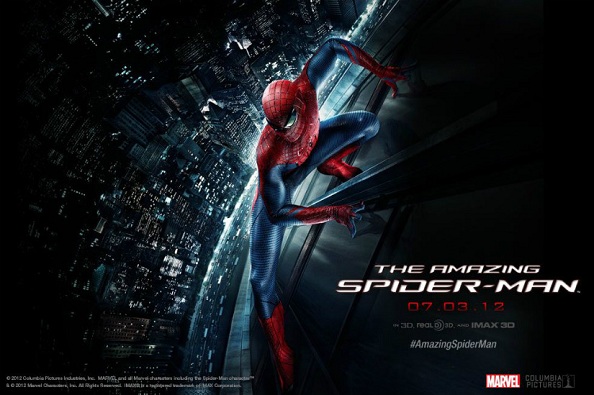 Synopsis: Peter Parker searches for clues leading to his parents’ disappearance which in turn introduces him to Dr. Curt Connors, his father’s former partner. Along the way a laboratory mishap changes him into Spider-Man, a crime fighting, spider-like superhero.

The film opens with an abrupt introduction to a young Peter Parker and his parents fleeing their home after Peter’s father Richard finds his office ransacked. Peter’s parents drop him off at his Aunt May (Sally Field) and Uncle Ben’s (Martin Sheen) home where they give him an upsetting farewell and are never heard from again. The film quickly flashes forward to a high school version of Peter (Garfield) living with his strong willed and nurturing aunt and his wise and outgoing uncle. Despite having these strong parental figures Peter is very much a frail social recluse. Even though he is frail, he makes up for it in heart as he attempts to defend those who are picked on at school, himself included. His continual feud with Flash Thompson (Chris Zylka) reiterates this character trait as Peter continually defends the would be victims of Flash and ends up taking the beating instead. The continual punishment and bullying are a couple of the many factors that push Peter to an introverted state where he focuses on his hobbies of skateboarding and his fascination with science. These interests, combined with a curiosity surrounding the life of his father leads him to Oscorp which is where his father worked as a scientist. While posing as an intern, Peter is able to sneak into Oscorp but is quickly recognized by the lead intern, Gwen Stacy (Emma Stone), who decides not to reveal him if he stays out of trouble. Peter of course sneaks into a restricted area in hopes of discovering more about his father’s work, leading him to a room of spiders. Gwen quickly discovers him and forces him to leave as he is bitten by a spider.

With the exception of the quick introduction of Peter’s parents, the Spider-Man story has been told. The story of his powers and coming to terms with them has been told multiple ways with a similar origin through a variety of films, TV shows, cartoons, and comics. What sets this film apart from the rest is not the origin story but the characters surrounding it. Andrew Garfield defines the “Amazing” in “The Amazing Spider-Man.” He plays every aspect of both Peter and Spider-Man perfectly and has no trouble with the duality of the role. He brings both a new level of emotional depth to Peter and finally a confidently sarcastic humor to the role of Spider-Man.

Emma Stone, as Peter’s love interest Gwen Stacy, is an unexpected surprise. I was expecting a witty role similar to the characters I usually see her play but I was definitely able to see Gwen rather than Emma by the end of the film. She plays a very subtle type of sexy in the film that adds to the chemistry with Garfield. They have a few intimate moments throughout the film but it plays to the “less is more” factor by showcasing their growing desire for one another.

The one role that I was not impressed with was Rhys Ifans as Dr. Curt Connors. Once he changed into The Lizard, I saw no need for Dr. Connors. I expected a Jekyl and Hyde type of portrayal but instead just received Hyde and Hyde inside Jekyl’s body. The parental figures of the film all had smaller roles but their roles were just as significant as the main characters’ roles. Sally Field was not very memorable as Aunt May, she stood firmly and quietly in the background throughout the film. She portrayed the character well and her dramatic scenes were significant to the development of Peter, but she had very little screen time to truly discover who this version of Aunt May was. Martin Sheen however had a strong presence on the screen. His role of Uncle Ben is key to the foundation of Spider-Man but on top of that he provided a stern voice of reason and light moments of humor that established Peter’s superhero persona. Uncle Ben is Peter’s true reason for becoming the Spider-Man we know and Sheen’s portrayal made me see why. Dennis Leary as Captain Stacy was another surprise to the movie. He had a stern demeanor about him and a sense of duty to uphold the law but you could also see the loving father in him. Leary was able to be both a father and a leader as Captain Stacy and also provided Spider-Man’s sense of justice to overshadow his sense of vengeance.

The characters may be the backbone of the film, establishing roles that capture our interest, but the overall cinematography and action sequences are what makes this film a necessity to see again. Spider-Man’s action scenes are fluid and extremely well choreographed with a mixture of acrobatics and Parkour like movement. What I liked most about these scenes is that they made sense. The fights were natural (as natural as they can be) for two super powered rivals. The Lizard played to his size while Spider-Man played to his speed making the battles very entertaining. I would also recommend seeing this film in IMAX 3D, the action shots work really well in both 3D and the IMAX format. I actually thought the first person shots that were seen in the trailer would be a little “cheesy” but they were a welcomed addition to the film. The mixture of camera angles kept me on my toes and added to that heart-pounding action. The 3D was the best I’ve seen this year and as much as I hate to say it…I liked the 3D shots better than “The Avengers.” The 3D depth was extremely smooth and did not strain my eyes in the least. It was captivating watching the small dust and ash particles, and with the multiple camera angles, it made you feel like you were in the film.

Overall I was extremely impressed with Marc Webb’s version of “Spider-Man.” The biggest attribute of the film was Andrew Garfield and I pray for a sequel to see him reprise the role. The one drawback was having to retell the story that so many people know but this was a remake so it had to be done. The movie had a list of captivating characters, visually stunning scenes, and heartfelt heroic moments that remind us why we love Spider-Man.

A familiar story with an amazingly new adventure…

4 thoughts on “Review: The Amazing Spider-Man”