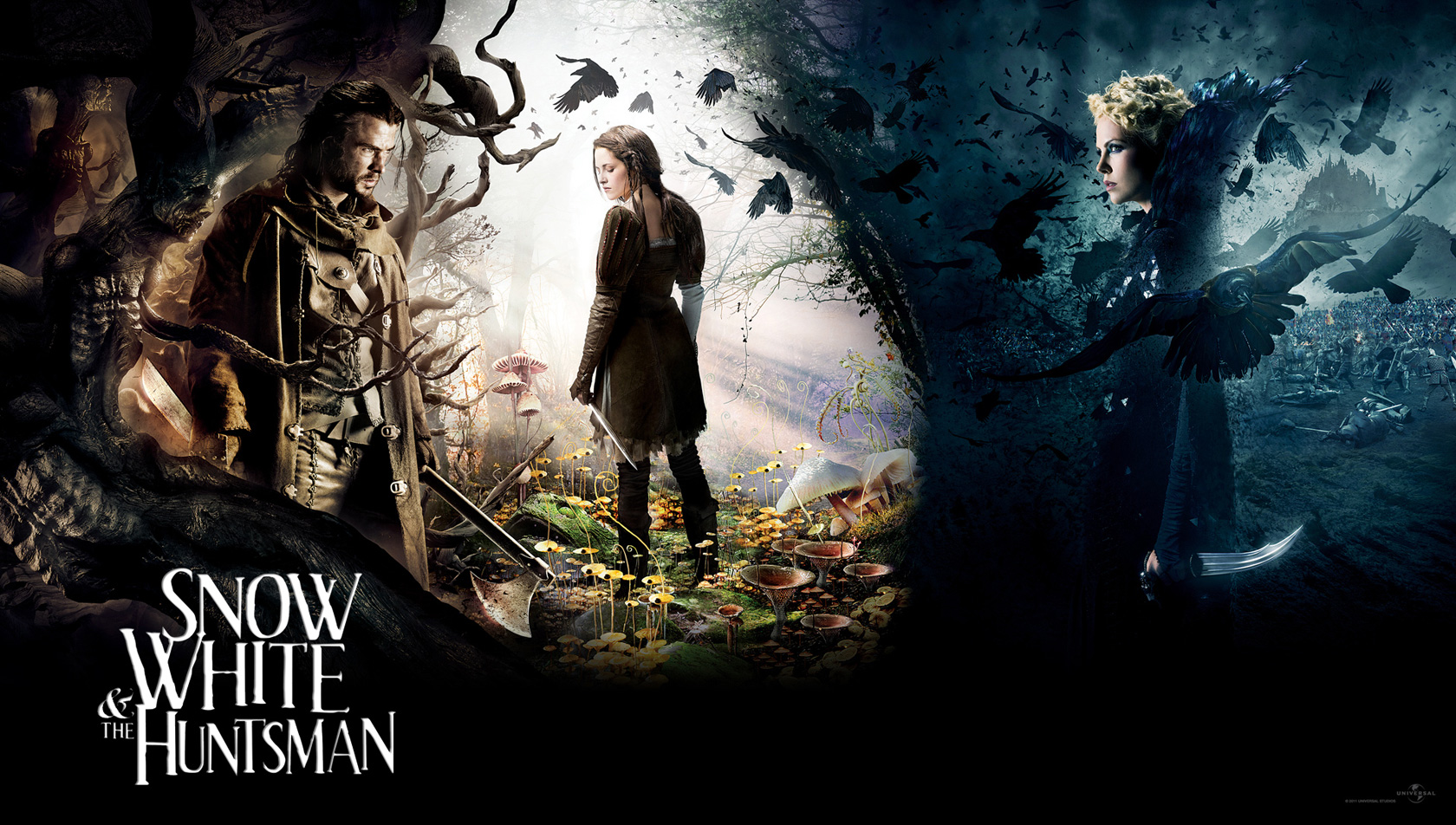 Synopsis: Kristen Stewart (the Twilight saga, On the Road) plays the only person in the land fairer than the evil Queen Ravenna (Oscar® winner Charlize Theron of Prometheus, Hancock) who is out to destroy her.  But what the wicked ruler never imagined was that the young woman who has escaped her clutches and now threatens her reign has been training in the art of war with a Huntsman named Eric (Chris Hemsworth of Thor, The Avengers) who was dispatched to capture her.

In the opening scene we see a young Snow White along side her father, ruler of the kingdom. During a battle with a foreign invader the army captures an alluring and gorgeous prisoner who marries the king and on their wedding night she kills the king and ascends the throne. A few years later Kristen Stewart is anointed the fairest one of all by “The Mirror” and enrages the evil queen, (perfectly played by an evil Charlize Theron), who wants to destroy her. Snow White escapes from her prison and spends most of the film running from the royal knights who are in pursuit. She trains for battle while a huntsman, (Chris Hemsworth), sets out to find her to kill her. Along the way they encounter the animals of the magical forest as well as a few dwarfs.

Review: The story of Snow White has been done before. From the Disney cartoon with the dwarfs named Sleepy, Bashful, and Doc to“Mirror, Mirror”  which was the recent adaptation by Tarsem Singh but was a Dopey children’s version seemingly made to make critics Grumpy. We have seen it all. This film, however, which stars Kristen Stewart, Chris Hensworth, and Charlize Theron has the feel of an epic war movie and should be quite the big-tent crowd pleaser for both young and old, as well as both men and women.

The weight of ‘Huntsman’ relies on Greig Fraser’s lavish and stunning cinematography and Colleen Atwood’s fanciful and stark costume design. A great example of the cinematography is found during a shot of Ms. Theron hunched over, with her frail boney back facing the camera which happened to be perfectly framed. Rarely can I say that every captured angle from a film engrosses, if not overwhelms, the viewers. Overall the ambitious and ravishing production completely satisfied my expectations. Overindulgence slightly goes into what is effectively ‘overdrive’ with some of the shots and can be compared to ingesting too much sugar. The trailers only shows a fraction of the impressive look to ‘Huntsman’. As Theron ages through the film the makeup work for her face is very realistic and is the complete opposite of Armie Hammers’ laughably bad facial effects in “J Edgar” but this detail is found everywhere including “The Dark Forest” which was effectively eerie ‘Huntsman’ achieves the epic scale on a grandiose level that ‘Mirror, Mirror’ never wanted to be. Every shot is calculated and planned out by use of artistic filmmaking. Story aside ‘Snow White and the Huntsman’ reminded me of both ‘Lord of the Rings’, without the ring or Frodo, and ‘Game of Thrones’ without the brutality and the boobs. The acting was better then I anticipated and Chris Hemsworth was perfect for the role and seems to be adjusting as a “man’s man” actor effectively. Charlize Theron encompassed pure evil as a demonic queen who thirsts for power and Kristen Stewart doesn’t ruin the experience. Let me declare that disdain for Ms. Stewart is no excuse for writing off this gloriously entertaining summer film and she actually showed 2 and a half emotions in the role too.

“Snow White and The Huntsman” might be the first Kristen Stewart movie girls/women drag their boyfriends/husbands where the men who attend will likely like it better than their female companion. My guest to the press invited screening who’s a ‘Twilight’ loving, ‘Bachelor’ watching woman made a revealing comment when she admitted the only thing she didn’t like about ‘Snow White and the Huntsman’ was the lack of kissing (just two kisses). If you can get over the fact Kristen Stewart is the star then you will likely enjoy the movie even if you don’t like her as an actress.  This was the film Amanda Seyfried’s “Red Riding Hood” and even Ridley Scott’s “Robin Hood” wanted to desperately be; a stylized, believable dark revisionist tale of a classic fable and its safe for guys, too. Maybe a little too safe.