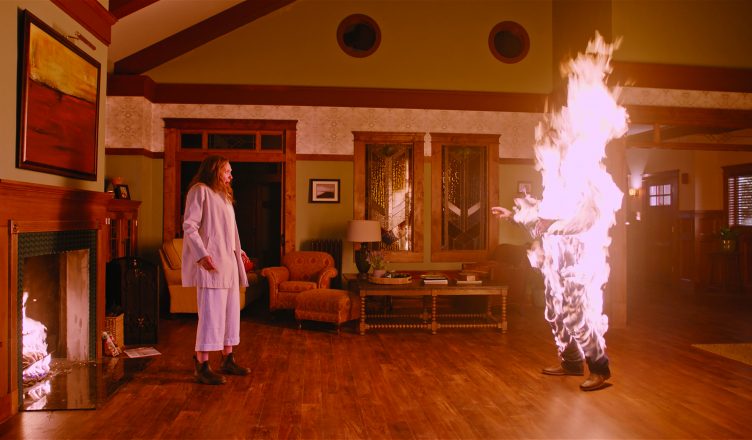 Two of the strongest female performances of the year, so far, have been from Emily Blunt (“A Quiet Place”) and Toni Collette (“Hereditary”).  Not only are their performances intense, your attention will be riveted to the screen to see what  will happen next.

A third strong female performance (by Charlize Theron in “Tully“) was not technically a horror film, but, instead, the age-old tale of new motherhood. To some  of us who have lived it (twice in my own case) “Tully” bordered on the very edge of horror, especially with its twist ending (screenplay by Diablo Cody; direction by Jason Reitman.)

Both Blunt’s and Collete’s performances come in artistic, well-made horror films that “Time” magazine, in its newest (June 18) issue says are part of “a new wave in horror, pictures that are smart, subtle and artfully made.” Anyone who saw “Get Out”  nominated as Best Picture of the Year cannot deny this New Wave of artistic horror films.  These are films that are spooky, creepy, and haunting, but they also evoke common themes that were being struck as long ago as “The Babadook” (2014). Motherhood. Protecting one’s offspring. Family bonds. All surface in both “A Quiet Place” and “Hereditary,” )just as Mario Puzo said that “The Godfather” series of films was not a film about the Mafia but was  about a family.)

“Hereditary” is just another in Toni Collette’s increasingly impressive body of work; she shows no sign of stopping any time soon. Her performance in “We Need to Talk About Kevin” (2011) and “The Sixth Sense” certainly nailed down her bona fides for these kinds of films a long time ago, but she also appeared in “Little Miss Sunshine” (2002) and “About A Boy” (2006), so we certainly cannot say she is typecast.

Collette said, of taking this role directed by first-time writer/director Ari Aster, in a “Parade” interview:  “I think I am interested in the really deep, scary stuff that unites us as human beings.  Something that is unavoidable, and that we all experience.  Any story that sheds light on that and somehow unites people when they watch it I am eager to be a part of.”

Critics will be pointing to current feeling(s) of helplessness and of being inconsequential in society and of not being in charge of one’s own fate in attempting to tiet this film into the current zeitgest. They did the same thing with “Invasion of the Body Snatchers” and Communism back in 1956. With Donald J. Trump as President (“Trump Organization” seems like an oxymoron, to me) and all systems upside-down, critics will be saying that  horror movies like “Hereditary”  where the protagonist is totally dominated by forces beyond his or her control (as in “Get Out” and, to a lesser extent, ‘A Quiet Place”) owe their inspiration to the forces at work at this moment in time in this country and the world. Will they be right, or will the screenwriters deny that?  (Jack Finney, Daniel Mainwairing and director Don Siegel did of “Invasion of the Body Snatchers” back in the fifties.)

For me, the film worked until the very end, at which point I wanted the ending to focus on something heroic that Gabriel Byrne must do, probably to Ann Dowd (“The Leftovers”), rather than the fiery and beyond-the-pale denouement we got, but I also wanted John Krasinski to grab a pitchfork in his final scenes, and that didn’t happen either.

So far this year, if you want to see powerful female performances, check out the 2 horror films mentioned above (“A Quiet Place” and “Hereditary”) and don’t fail to take in “Tully” and Charlize Theron, either.

Funny TRUE story about this film, which premiered at SXSW.

I had selected a documentary about a Scottish bicyclist who was the only Scottish cyclist to ever make it into the Tour de France and then was brought down in the Lance Armstrong doping scandal. The cyclist decides to try to make it back onto the Tour de France. I thought that sounded like a film I would never get to see anywhere else, while I was sure that “Hereditary” would play local theaters.

As the bicycling documentary wound down, it was time for the director to stand up and handle the Q&A. He was nowhere to be found. The bicyclist, himself, got up from the audience and began handling those duties when the director hustled in, late, and explained that he had taken in “Hereditary” down the hall. He just had to stay to see the end, even though it made him late. True that.