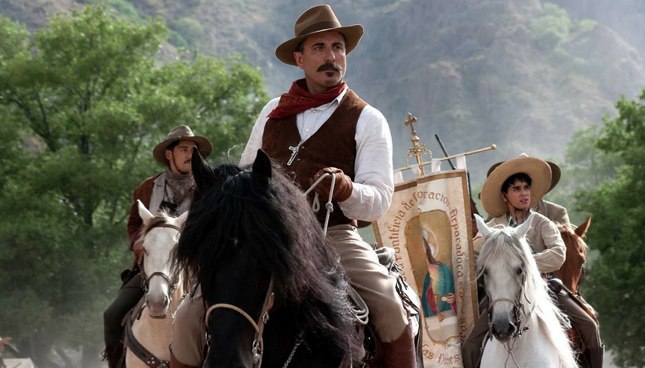 Synopsis: What price would you pay for freedom? In the exhilarating action epic FOR GREATER GLORY an impassioned group of men and women each make the decision to risk it all for family, faith and the very future of their country, as the film’s adventure unfolds against the long-hidden, true story of the 1920s Cristero War ­the daring people¹s revolt that rocked 20th Century North America.

Academy Award® nominee Andy Garcia headlines an acclaimed cast as General Gorostieta, the retired military man who at first thinks he has nothing personal at stake as he and his wife (Golden Globe nominee Eva Longoria) watch Mexico fall into a violent civil war. Yet the man who hesitates in joining the cause will soon become the resistance’s most inspiring and self-sacrificing leader, as he begins to see the cost of religious persecution on his countrymen . . . and transforms a rag-tag band of rebels into a heroic force to be reckoned with.  The General faces impossible odds against a powerful and ruthless government.  Yet is those he meets on the journey ­ youthful idealists, feisty renegades and, most of all, one remarkable teenager named Jose ­ who reveal to him how courage and belief are forged even when justice seems lost.

Review: For me, history is best embraced when you visit a museum or memorial of an event. Coincidentally, while camping in southern Colorado in early May, we stopped in the town of San Luis and visited the All Saints Chapel. Nearby was the Shrine of the Mexican Martyrs. As I walked around and read about the individuals lives and sacrifices, I realized I was at the shrine dedicated to the individuals who lost their lives in the 1920’s Cristero War for which the film “For Greater Glory” is based upon. I had just attended a test screening a week prior and this was the memorial dedicated to the martyrs featured in the film! The little known true story of Mexican people’s revolt against the government sought to secularize society made for a well-done war film.

Retired military General Gorostieta (Andy Garcia) is a man of little religious devotion, but his wife (Eva Longoria) is upset as Mexico bans religious expressions and the Catholic rebellion spawns a violent civil war. After all the government is executing Catholic priests (including Peter O’Toole in a powerful supporting roll) and burning religious paraphernalia like crucifixes. bibles, even some churches. General Gorostieta becomes the resistance’s most inspiring and sacrificial leader. They confront improbable odds against a powerful and ruthless government. The cast is a who’s who of talented Latino actors including Catalina Sandino Moreno, (worthy Oscar nominee for “Maria Full of Grace”), and Oscar Isaac (“Drive”). Cynically speaking, many well known working Hispanic actors make an appearance in the film. The only truly memorable character was a teenager named Jose (Mauricio Kuri) a man who shows true courage as his beliefs are put to the test. Meanwhile, the Mexican government, cabinet officials from the United States and even the Vatican are trying to work out a compromise to end the war.

The thrilling battle sequences and brisk pacing “For Great Glory” is somewhat hindered by a cluttered screenplay and very melodramatic moments. After all, this is a Christian film and an impressive one with spectacular set designs and overall production values. Cliché slow motion quick cuts, and explosive sound overwhelm the movie. Devoutly Christian history buffs whom enjoy war films will love “For Greater Glory”. A lot of movies with a strong Christian message are cheesy, lame, and poorly done, but not ‘Glory.’ I think a lot of Catholics especially families would enjoy the film but be turned off by the violence. As a believer and growing up Catholic I was not aware of the story of struggle for the rebellion, but found the lesson fascinating. Another element I did enjoy was learning about history and found that this was a more entertaining history lesson.

Opening in just 700 locations the question is “How will ‘For Greater Glory’ do at the box office?”. Could it surprise Hollywood by tapping into the Hispanic and Religious markets? It potentially could do just that. The Catholic Church and the organization Knights of Columbus, (who co-financed the film), are supporting the movie and have heavily promoted the film at Catholic churches across the country. It’s smart to market a rousing and moving war film about religious persecution of Catholicism to a devoutly Catholic audience. However, some conservatives have compared the execution of Catholic priest and burning of churches to the ‘ObamaCare’ contraceptive mandate, which really dishonors the sacrifice of the Catholic martyrs whom are honored in San Luis, Colorado. Also, it’s a stretch of logic to compare two events and unfortunately “For Greater Glory” is being sold this way and could potentially alienate the audience. Too bad because otherwise it appeals to anyone who have ever fought for something they believed in.

Bogged Down by Heavy Handed Melodrama

One thought on “Review: For Greater Glory”