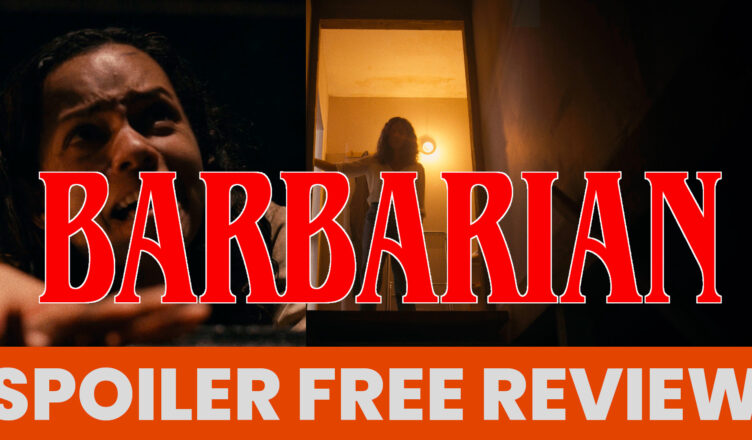 This is the first movie I’ve seen in a while completely blind. No trailers, no posters, no interviews. I literally had no idea what type of film or even the genre before watching it. The only thing I knew is that Alex Skarsgard was in the movie.

Traveling to Detroit for a job interview, a young woman books a rental home. But when she arrives late at night, she discovers that the house is double-booked, and a strange man is already staying there. Against her better judgment, she decides to spend the evening but soon discovers that there’s a lot more to fear than just an unexpected houseguest.

Barbarian has some pretty smart casting throughout the movie. The cast themselves all act the parts really well but the casting director took a keen eye to the selection.  Obviously, Richard Brake and Bill Skarsgård both have a lot of great experience in the horror genre. Skarsgard blew the roof off the genre with the film IT. Brake has been the scariest guy in the room seemingly forever with roles in Game of Thrones as the Night King and Winslow Fox in 3 From Hell.  Georgina Campbell rounds our pretty awesome cast as Tess Marshall. Now let me tell you about Georgina because she is no slouch or stranger to this genre. What’s excellent about this film is that they have some really cool chemistry with one another.

The plot of this movie isn’t overly complicated or anything and is borderline predictable. Justin Long is in this. didn’t know how much I missed seeing him in films and I really enjoy him going through the stereotypical horror film tropes. I love this new trend that horror movies are doing by taking the concepts and ideas we see all the time and switching things up. this makes things a little bit more meta, injects a little dark humor, but ultimately also makes things feel fresh.

The pacing is just right with Barbarian providing lots of nice tension throughout the movie. The movie plays with light and sound and assumptions and runs with them in cool ways. We all worry about booking an Airbnb and finding someone else booked the same place. This movie takes that idea and turns it into one of the most uncomfortable nights in this poor woman’s life. What’s really interesting is how all of this is presented with Barbarian feating some awesome camera work. You’ll notice that the movie borrows from video games and their camera views. First-person and behind the back third person views are used throughout the movie and the end result works surprisingly well. There are times I felt like I was playing through a Resident Evil game as our protagonists ran for their lives through dark hallways and some other messed-up situations.

If you pay close enough attention you’ll notice that the film even pays a nice shoutout to Jordan Peele!

The backstory is far-fetched. Barbarian wants you to believe that we will suspend belief in the backstory and just focus on the current situation. Barbarian tries this but the movie loses me when we learn the history of the characters and their motives. Not only is it disappointing it’s actually a little silly. The movie powers through these obligatory scenes and quickly shifts the focus back to the present but… wow. The backstory doesn’t even explain why Barbarian is so strong. It’s just there, not satisfying, and bothersome while we try to wrap our heads around this superhuman pulling off phenomenal feats of strength.

The wise homeless black man. This is just… NOPE.