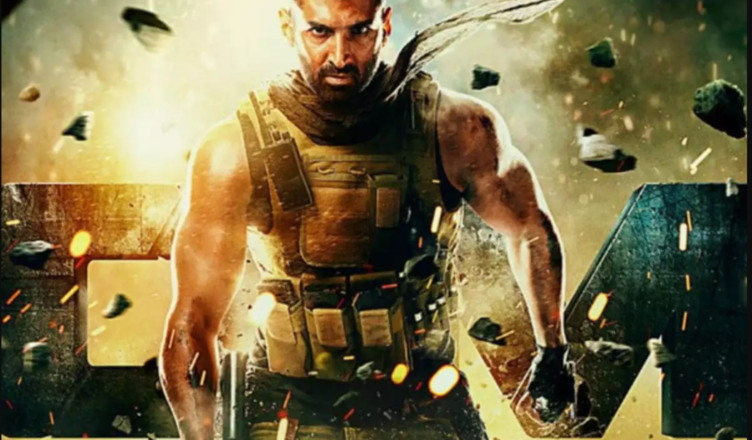 Om Rathore (Aditya Roy Kapur), a para-commando, gets injured in an enemy attack and loses his memory. His colleague Kavya Sharma (Sanjana Sanghi) takes care of him while he recovers. Om has memories from his past where his house was burned down by some attackers, and he got separated from his parents during the incident. As Om and Kavya visit his burnt and dilapidated house, they discover a picture of Dev (Jackie Shroff) in a closet. Om told Kavya that Dev was his real father and his real name was not Om, but Rishi.

Om, who was actually Rishi, was raised by Dev’s brother Jai Rathore (Ashutosh Rana). Jai’s house was attacked by some henchmen, and his teenage son Om died because of the injuries he suffered from the attack. So, Jai and his wife had raised Rishi like their own son and had named him Om. Om became familiar with the fact that his real father Dev had given light to a military missile project named “Rashtra Kavach” which had fallen into the wrong hands. Because of this incident, Dev, who in spite of being innocent, was designated as a traitor to the nation.

Now, it was up to Om to not only bring the “Rashtra Kavach” back to the Indian government but also prove the innocence of his father to the nation. 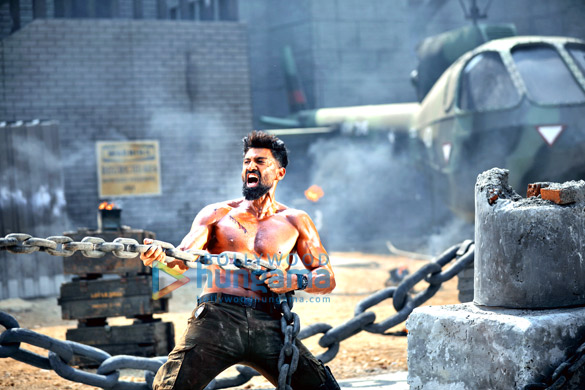 This time Aditya Roy Kapur has shed his romantic image. He has been portrayed similar to the evergreen ‘’He-Man’’ of Bollywood Sunny Deol! If you don’t know who Sunny Deol is, allow me to enlighten you about the fact that he is the “Last Action Hero” of the Bollywood film industry. In the 1990s Bollywood movies, when situations took adverse turns and villains used to take over the place, Sunny Deol used to make his dashing entry and punch and kick the hell out of them! Sooner, you would find dozens of villains lying on the ground, and Sunny Deol walking past them flaunting his 21-inch biceps.

I mentioned Sunny Deol here because Aditya Roy Kapur with his action hero avatar of para-commando Om in Rashta Kavach Om seems to have transformed into the “new generation” Sunny Deol of the industry. With a ripped physique, bulging biceps, and washboard six-pack abs, Aditya Roy Kapur appeared absolutely fantastic as a para-commando ready to take on the deadliest enemies. He fights the enemies with full force and throws them helter-skelter-like paper balls. You probably wouldn’t want to miss out on the raw action!

Aditya Roy Kapur might have tried to shed his romantic guy image in Rashtra Kavach Om, but not completely. He seems to have great chemistry with his co-star Sanjana Sanghi who plays the role of a female commando and Om’s colleague, Kavya Sharma. Sanjana Sanghi appeared as an energetic and combat-skilled female commando in this movie, and I simply couldn’t believe that this is the same actress who played the terminal-cancer patient in the 2020 romance drama “Dil Bechara” opposite late actor Sushant Singh Rajput. 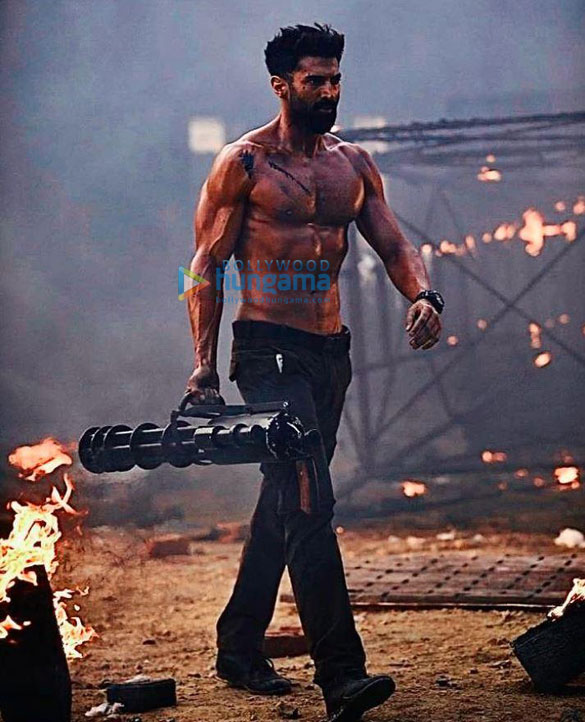 The scene opens, and we see a plane flying over the ocean. The plane’s luggage section opens, and Aditya Roy Kapur as para-commando Om emerges. From that height, he directly jumps thousands of feet below onto an enemy ship without any parachute. He lands on the ship and a tremendous fight endures between him and hundreds of henchmen present on the ship.

This was an unbelievable opening scene. After watching this scene you will probably address it as ‘’unreal’’ and “absurd” before falling off your chairs. But some like me would call this enthralling. After watching such an opening, you can only imagine what would be coming up next. I must tell you that the entire screenplay of Rashta Kavach Om is loaded with hair-raising raw action scenes. From violent gun action, hand-to-hand combats, serial bomb explosions, and aerial action; this movie is a complete blast on the big screens!

In another scene, you will witness Aditya Roy Kapur pulling a helicopter with chains using his bare hands, and making it strike a wall and explode! This scene does show that Om the para-commando possesses superhuman strength too apart from miraculous combat skills. As the movie proceeds, you will witness Aditya Roy Kapur getting pierced by bullets all over but still, he keeps fighting. In one instance he gets shot directly in his head but he only loses his memory. He should be brain dead, shouldn’t he? Such scenes may appear illogical to many but as I say; when you watch a movie for entertainment, especially an intense action movie, keep all your logic behind it!

Om Pulls And Explodes The Helicopter!

Outstanding Performances By The Supporting Cast

Rashtra Kavach Om has some of my all-time favorite Bollywood veterans like Jackie Shroff, Ashutosh Rana, and Prakash Raj. They are top-level senior actors ruling the Bollywood industry for decades, and I don’t possess the authority to comment on their performances. I was just born when they started in this industry.

In whichever movie whatever roles they play, they are sure to carry them out excellently. Their body language, facial expressions during performances, and dialogue delivery styles are unique and can never be copied by any other actor. Though Jackie Shroff and Ashutosh Rana had short roles in this movie, they performed their parts to the best of their abilities. Prakash Raj as Om’s commander Murthy looked promising and carried out his role quite efficiently.

The screenplay of Rashtra Kavach Om is flooded with immensely powerful dialogues written by Niket Pandey which might make your blood boil! It is a fact that whenever Bollywood introduces some patriotic dialogues in its movies, the hearts of every Indian citizen start beating with patriotism. This is actually an innovative approach of the industry to publicize its action-oriented movies, and make them appealing to the public.

Some inspiring dialogues from Rashtra Kavach Om are, “Jeetta Wahi Hain Jo Maut Ko Lalkaarne Ka Dum Rakhta Hain” meaning, “The person who can dare to challenge death, surely comes out as the winner”, and “Rakth Rahein Ya Na Rahein, Rashtra Humesha Rahega” meaning, “Doesn’t matter if the blood stays, but the nation surely will”.

I found the track “Saansein Dene Aana” in Rashtra Kavach Om quite electrifying with loud and groovy music. Sung by Raj Barman and composed by Chirantan Bhatt, this track completely rocked the show! Don’t forget to check it out. I have placed the music video featuring Aditya Roy Kapur and Sanjana Sanghi at the very beginning of this review.

The cinematography in Rashtra Kavach Om by Vineet Malhotra was exhilarating. The wide-angled high-definition camera shots, aerial drone shots, and intense explosion shots blowing up the sets made the viewing experience utterly exciting. If you ask me, I would say that the awesome camera work had a major role in adding an essence of thrill to the screenplay.

The editing in Rashtra Kavach Om was performed quite precisely. Editor Kamlesh Paraui has taken the utmost care to aptly place the action scenes in the storyline in a sequential manner through the story fluctuates back and forth from the present to the past.

The film has a total screen time of 2 hours and 15 minutes. Though the plot was lengthy and a bit confusing, still I believe the editor did his best to keep this movie’s runtime as precise as possible.

The only aspect which kept this phenomenal action-thriller from appealing to the audiences was its confusing plot which made them lose interest as the story proceeded. I think writer Raj Saluja should have considered revising the story before it was framed into a film.

In the plot of Rashtra Kavach Om, after probably every 15 minutes, a new subplot was introduced. The introduction of too many sub-plots made the story lose its flow to some extent, and appear confusing. Due to the scripting mishap on the part of the filmmakers, this masterwork of the Bollywood industry failed to live up to the expectations of the audiences.

What is the first thing that comes to your mind when you visit the theater to watch any movie? “How’s the story going to be?” When the filmmakers fouled up the plot itself, no matter how intense the screenplay or how good the cinematography and the performances of the actors might be, the movie goes for a flop! At the end of the day, it’s the audiences who decide the fate of the film, not the filmmakers. 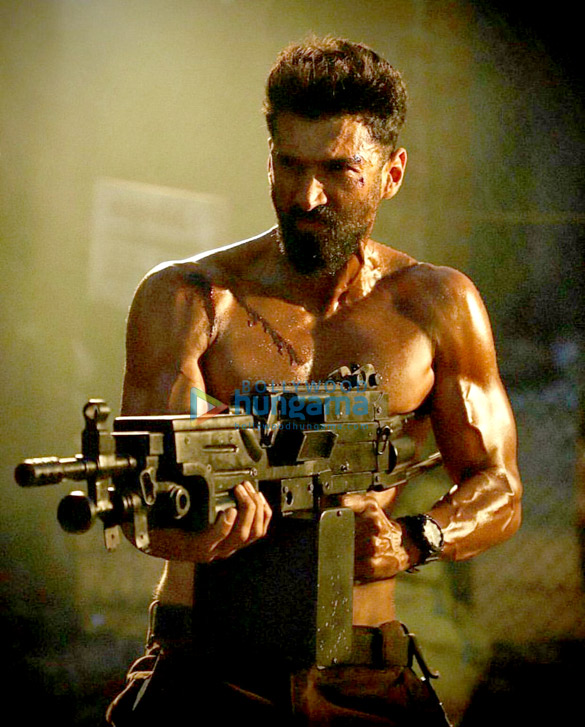 However, if you ask me, I wouldn’t address Rashtra Kavach Om as a flop as most film critics are opining it to be. In fact, I would call it a ‘’man-made disaster” which could have been prevented if the writers had taken a bit more care while framing the story. This electrifying action-thriller had the capability to hit the box office records had not it been for its confusing and disappointing plot. Note that, I have mentioned the plot briefly in this review. If you are new to watching Bollywood movies, you probably wouldn’t be able to grasp any part of the story upon watching this movie all by yourself.

The name of this film was changed from “Om: The Battle Within” to “Rashtra Kavach Om” just a few days before its release due to legal issues faced by the filmmakers with regard to its title rights. All I have to say about this movie is that, “A great defense system might be capable enough to protect a country, but there is no defense system designed in this world to reverse the ill effects of a bad storyline!” 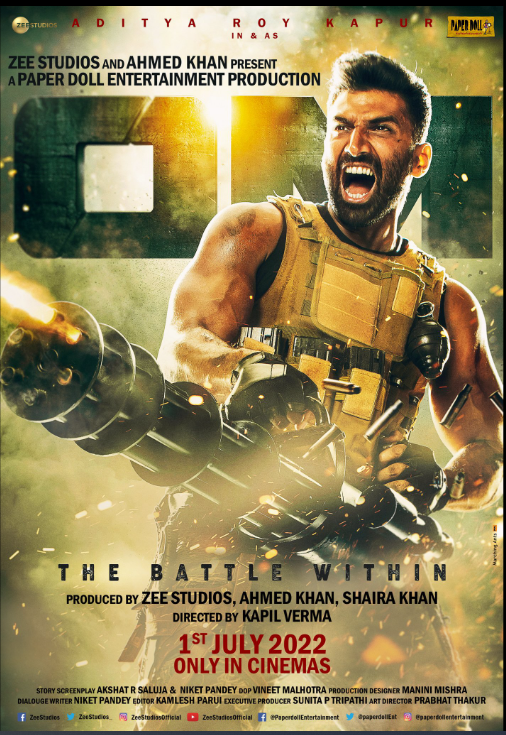