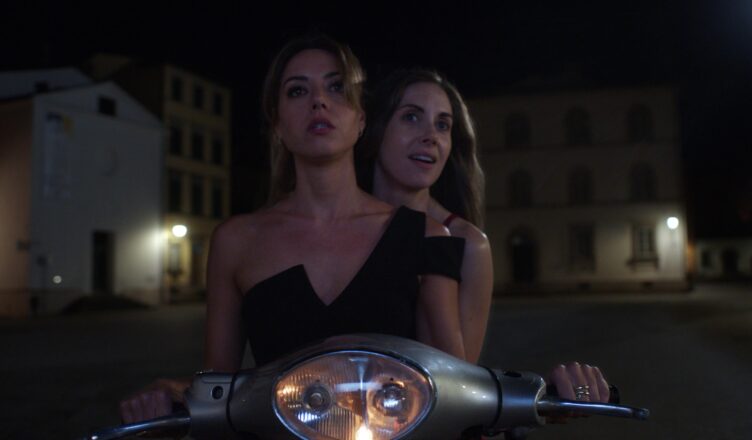 In “Spin Me Round,” premiering at SXSW on 3/12, Allison Brie plays a manager at a Tuscan Grove Italian restaurant, one in a franchise chain in Bakersfield, California. She is selected to journey to Italy and attend the Tuscan Grove Exemplary Managers’ Institute. There, she joins a group of other such employees from around the United States.

Mark and Jay Duplass executive produced Spin Me Round, which premiered at SXSW on March 12th. It features Allison Brie as both the star, the co-writer (with its director, Jeff Baena) and as one of its producers. The film starts out to be a comedy that might become a romance, which then briefly considers becoming a thriller.

I met the Duplass Brothers at the Chicago International Film Festival many years ago, when “Jeff, Who Lives At Home” was hitting the festival circuit (2011). Since then, I have enjoyed their individual appearances in “The Morning Show” as Jennifer Aniston’s director Chip Black (Mark) or in “Tully” and Jay’s breakout role as Bill Dobson in “The Chair,” the loopy widowed professor. I also enjoyed “Jeff, Who Lives At Home.” but other Duplass outings seemed low-budget (“Creep”) and poorly crafted.

This effort seems not to know what genre to aim for. The cast suggests that it is going to be a comedy.  We have, as its lead, Allison Brie (of “G.L.O.W.”), Fred Armisen (“Portlandia”) and Molly Shannon, “SNL” alums; Zach Woods (“Veep”) as Dana; Aubrey Plaza (“Parks & Rec”) as Kat and Lil Rel Howsey (“Get Out). It’s a cast that screams comedy, but the difficult-to-determine-what-it-is screenplay, co-written by Allison Brie and Jeff Baena, its writer/director, doesn’t  make up its mind what it’s going for.  It started as a film about Italian pasta; I felt as though they just threw everything against the wall and hoped that something would stick.

Initially, things seem to be heading in the direction of a romantic comedy (some of the other attendees, like Molly Shannon, are wacky) but then things take a darker turn, as visions of Epstein’s island activities crowd our consciousness. The tag line for the film is: “A woman wins an all-expenses trip to a company’s gorgeous “institute” outside of Florence and also the chance to meet the restaurant chain’s wealthy and charismatic owner. She finds a different adventure than the one she imagined.”

From the outset, we get the impression that Aubrey Plaza as Kat, who is employed by chain founder Alessandro  Nivola’s Nick, operates as his pimp, securing the prettiest of the female attendees at the gathering and shepherding them to Nick’s yacht. The plot meanders. The script (Allison Brie and Director Jeff Baena collaborated) lacked focus from start to finish. The character of Kat (Aubrey Plaza) also allows the obligatory lesbian encounter. That doesn’t really seem to focus on the theme. To be honest, Alessandro Nivola (the boss) looked too old for Allison Brie’s character. He is 10 years older than Ms. Brie, in real life. In many scenes Alessandro fixed Brie with a piercing stare, which reminded me of the rumor that the reason that legendary ladies’ man Warren Beatty did so well with the leading ladies of his day was that he was myopic. Nivola has a crying scene that is supposed to be funny but just ends up embarrassing and his intense staring in the romantic scenes is off-putting. His casting in the part doesn’t do the film any favors.

Shooting began in Italy in June of 2021, and the Italian countryside is beautiful.

Alison Brie’s co-star in what seems to be trying, at times, to become a heterosexual romance is Alessandro Nivola, whom we saw in “The Many Saints of Newark,” the “Sopranos” prequel.

In short, the script is a mess and the message of the script, if any, seems lost in the many mis-steps of tone.

At the very end of this Cinema-by-committee offering, the wealthy suitor (Alessandro Nivola) shows up to pitch Allison Brie’s character on a romantic redux when she is back in Bakersfield, California, at her franchise outlet. Nick brings with him a baby turtle because of his pet nickname for her.  She tells him to get lost. Given the events that have occurred prior to Nick’s Grand Finale appearance, the gesture seems  too little,  too late, but it does strike a blow for female empowerment.

I’ve been burned by some Duplass Brothers low-budget horror flicks at other festivals, but this one had some people in it who can be genuinely funny.  I was suckered in by that.

You won’t be able to make much sense out of the film, either, and Alessandro and Allison will have better roles in better films of the future.