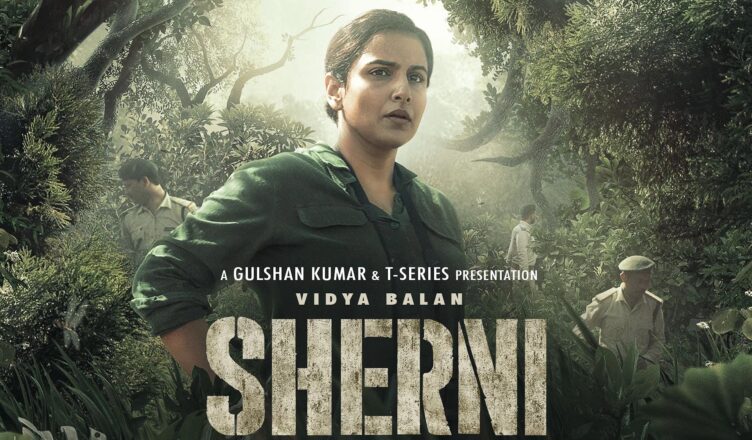 Beware, because the tigress prowls the jungle! Director Amit Masurkar along with producer Bhushan Kumar brings a spine-tingling tale of a man-eating tigress which used to prowl the Indian forests. Sherni stars Vidya Balan along with supporting actors Vijay Raaz and Sharat Saxena.

The story revolves around forest officer Vidya Vincent (Vidya Balan) who is concerned about a man-eating tigress prowling the forest she was in charge of. The local villagers used to graze their cattle at the border of the forest and in this endeavor, many villagers became prey to the tigress. Dead and mutilated bodies of the villagers were found on a regular basis at the outskirts of the jungle. DNA reports of the dead bodies and CCTV footages revealed that these killings were done by a tigress whom the forest officials referred to as “T-12”.

Amidst a hue and cry with plagued the nearby village, Vidya decided to capture the man-eating tigress alive so that she could be moved to a nearby national park. She set on the mission along with a butterfly expert Hassan Noorani (Vijay Raaz) to capture the tigress.

But as more dead bodies were discovered, the villagers got impatient and wanted the man-eating tigress to be killed. So, an ace hunter named Ranjan Rajhans a.k.a Pintu (Sharat Saxena) volunteered to kill the tigress. Pintu had the support of the local MLA G.K. Singh (Amar Singh Parihar) as well as Vidya’s boss Bansal (Bijendra Kala).

Pintu was no ordinary hunter. He was a self-proclaimed “tiger expert” and had killed several tigers and leopards in the past. Vidya and Hassan were direly against Pintu as they knew he wouldn’t capture the tigress alive and only intended to kill her. After all, tigers are an endangered species and people like Pintu are responsible for their endangerment. It was also revealed that the tigress had recently given birth to two cubs.

Pintu began searching the forest for the tigress. He almost shot a male tiger in the effort as he couldn’t resist the temptation of shooting any tiger which came to his sight. The forest guard stopped him at the right moment before his bullet almost got the male tiger. This angered Pintu and he pointed his rifle at the forest guard threatening him that the next time if he dared to stop him, he will kill him as well!

Pintu started encroaching the forest at night in search of the tigress. Vidya and Hassan exercised all their powers to stop him. However, all their efforts were in vain! Pintu had the support of higher officials and nothing could stop him!

One night, upon encroaching the forest, Pintu waited patiently for the tigress. As soon as the tigress emerged, he aimed and shot her dead. To cover up the matter, one the forest guard shot the dead body of the tigress with a tranquilizer. He did this to justify that the tigress had attacked them and to control the situation, they had to shoot her.

Pintu had gone further deep into the jungle to find the tigress’ cubs so that he could kill them as well. Vidya and Hassan had nothing to do except brood over the tigress’ dead body. They were completely against the killing of tigers and Vidya got into an argument with her boss over this matter. While inspecting the body of the tigress, they found out the truth that she was shot before and was tranquilized later. This was a murder! Vidya tried to convince her higher officials on this matter that Pintu had illegally killed the tigress without trying to tranquilize her first. However, Vidya’s bosses ignored her pleas and asked her to cover-up the matter of the tigress’ killing.

The distressed Vidya could do nothing but type her resignation letter. She couldn’t take it anymore. Meanwhile, a new forest officer was appointed in Vidya’s place as her bosses had already planned to transfer her to some other forest location.

As Vidya was going to submit her resignation to her office, a local villager informed her that the tigress’ cubs have been located. The ending scene shows her rushing to the location and rescuing the cubs. She sent them to a safe place before Pintu could track them.

Indeed a great story by Aastha Tiku! After a long time I came across a Bollywood movie with a good storyline. Sherni is not a jungle adventure movie. It is more like an awareness story about forest and tiger conservation which involves thrills at every moment.

Apart from portraying the story of the rampaging man-eating tigress, Sherni’s plot digs deeper into the corruption prevalent in the Indian Forest Service system. Scenes in Sherni show Vidya’s boss Bansal evading the requests of the villagers to “do something” about the rampaging man-eating tigress. It was until there was a mass protest from the villagers which compelled them to burn down a forest service jeep and also an incident where villagers barged in Bansal’s office to beat him up that he was forced to take action against the tigress. Sherni also portrays a lot of sexism which is prevalent in the male-dominated Indian system. Vidya, being a female forest officer, was suppressed by her male superiors as well as subordinates and was not allowed to carry out her duties efficiently.

Sherni also depicts how the media can manipulate and brainwash common people. Scenes in the movie show the media exaggerating the killings of the villagers to be done by the tigress only. In reality, DNA tests done by Hassan revealed that many of the killings were actually done by a bear and not the tigress.

The situation of the villagers shown in Sherni was pathetic. They had no place to go except for the outskirts of the jungle to graze their cattle. The village was surrounded by forests from both sides and the tigress had to cross the village in order to go from one part of the forest to another. Thrilling and chilling instances depicting the efforts of the forest guards to persuade the villagers to stay away from the forest border at night were shown.

I must say, an environmental thriller is not a very frequent genre in Bollywood. Sherni not only forays into this genre but also delivers a high-level of excitement and thrill apart from provoking some thought in its concluding moments.

Astounding Performances By The Lead Cast

Vidya Balan as the distressed forest officer, Vijay Raaz as the concerned conservationist Hassan and Sharat Saxena as the rampaging tiger hunter Pintu carried out their respective roles brilliantly. 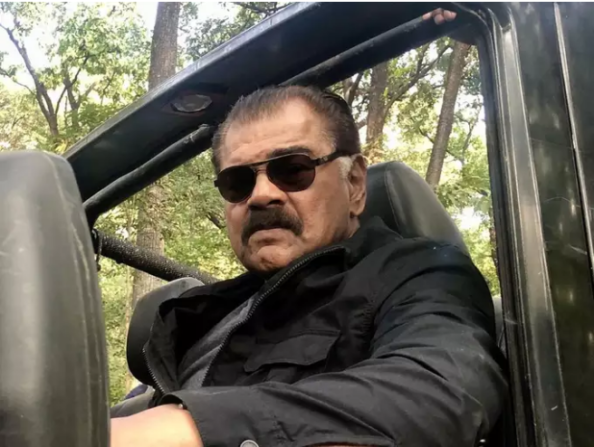 Vidya’s distressed and helpless forest officer character is praiseworthy. Though she looked helpless and incapable of stopping Pintu who was bent upon killing the tigress, she did some appreciable work in the end. She protected the tigress’ cubs which could have fallen victim to Pintu’s wrath.

Sharat Saxena as the aggressive hunter Pintu also deserves some credit from my side. At the age of 70, he looks cutting fit like a 40-year-old! He sports a brawny muscular physique and I must tell you that he is one of the most fearsome villains in Bollywood. If you had happened to watch his 1998 action thriller “Ghulam” where he played the lead villain opposite Bollywood’s veteran actor Aamir Khan, you would have witnessed the “fight of the millennium” he gave to Aamir in that movie!

Beautiful Location Along With An Awesome Camerawork

Major portions of Sherni were shot in the forests of Madhya Pradesh. The camerawork by Rakesh Haridas successfully captured the scenic beauty of Madhya Pradesh’s dense forest locations. Even the night scenes which involved some tigress action were shot precisely using high-definition night vision cameras.

If you are saddened by the killing of the tigress by Pintu, let me tell you that all animals used in Sherni which included the bear, the male tiger, the tigress as well as her cubs, were actually CGI! No animals were harmed during the making of this movie!

This is perhaps the second hit of newbie director and producer Amit Masurkar after his 2017 black comedy drama “Newton”. Amit Masurkar has bagged only three films in his directorial career and I believe he has a long way to go in the massive Bollywood film industry.

The Screenplay Involved Some Slow Patches

Sheni covers a runtime of 2 hours and 10 minutes. There were some slow patches in the movie as the screenplay was bundled with instances from forest officer Vidya’s personal life. She was disinterested in her job and used to video call her husband Pawan (Mukul Chadda) that she would quit her job soon. Vidya’s husband and mother-in-law (Ila Arun) visiting her were shown in the movie.

Apart from these, Sherni is packed with scenes of investigation on the tigress and constant ranting of the villagers on the sudden killings, which consume major portions of the movie. A lot of technicality involving analysis of night vision camera footages along with DNA sampling of the dead bodies made the screenplay a bit cumbersome. I feel that this to some extent lowered the thrilling essence in the movie. At certain points I did feel like fast-forwarding certain instances as they had started to appear a bit boring to me.

The biggest spoiler lies in the name only! “Sherni” is a Hindi term which means “lioness”. But there is no lioness in this movie! This movie is about a man-eating tigress.

If Hindi terminology is concerned, this movie should have been named “Baaghin”. “Baaghin” is the Hindi word for “tigress”. I believe the name of this film is utterly misleading. However, the Indian audience doesn’t seem to care about this much because here in India people tend to ignore the differences between a lion and a tiger and use the same terminology for both!

There are just two tracks in Sherni and I have nothing to comment about those. They are downright horrible with loud and unpleasant voices of some newbie singers and I feel it’s not worth mentioning about them in this review.

Tigers are the pride of India. These big cats are endangered and on the verge of extinction. We need to protect them from hunters and poachers like Pintu. I appreciate that the Indian government has now become much more concerned with regard to the conservation of tigers. National parks and sanctuaries have been built all over India where tigers can now roam freely and safely.

Overall, Sherni is worth the watch. It will impact your mind and will leave you pondering in the end, “We as human beings, are we doing justice towards animals?”

However, the ending will leave you pondering even more on what actually happened to forest officer Vidya Vincent after she saved the tigress’ cubs? Did she resign from her job or she ended up getting transferred to some other forest location? If you are in for the thrill, you can choose to watch this intriguing human-wildlife conflict along with your families over Amazon Prime Video! 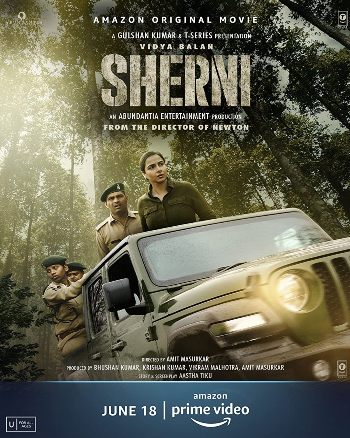