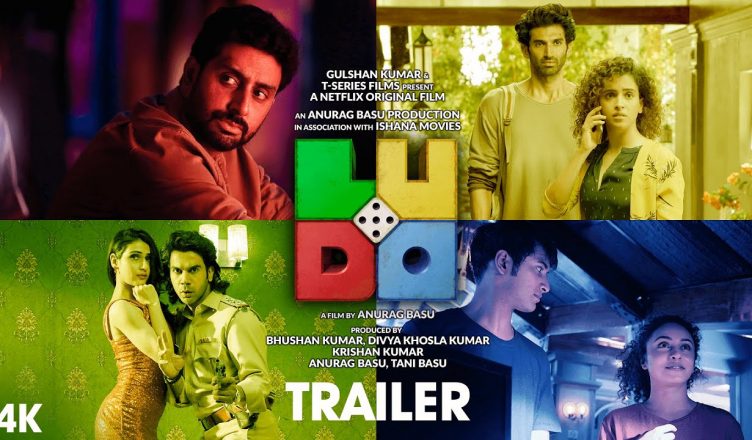 Ludo (2020) is a Bollywood dark comedy anthology about four different stories centred on inevitable jeopardize of life. The trailer of the film came out yesterday and honestly, it looks amazing.

The name of the film is derived from the Indian board game ‘Ludo‘ in which four players race from start to finish by rolling a dice. Similar to the game, the film is based on the theme of unpredictability of life.

The movie deals with four parallel stories. The first one is about a kidnapper who forms a unique bond with the child he has kidnapped. The second is about a man who helps the girl he loves to free her husband from jail. Then we see an easygoing man who is in a relationship with an ambitious girl. Another story deals with two people coming across a bag filled with a huge amount of money.

Using the concept of Butterfly Effect, the four stories are connected through one man whose role is played by the actor, Pankaj Tripathi. Tripathi will play a comic negative role in this film. This is evident by his quirky dialogues. In one scene he tells a man that he is ‘not killing him, but freeing his soul’ before shooting him.

The trailer looks very chaotic in the first watch. It combines a lot of parallel stories in a two-minute clip. It does not reveal the full concept of the film, which makes it even more engrossing. The film seems to be packed with typical Bollywood-ness such as vibrant colours, slow-motion action scenes and energetic background music. The trailer gave me 80s Bollywood vibes.