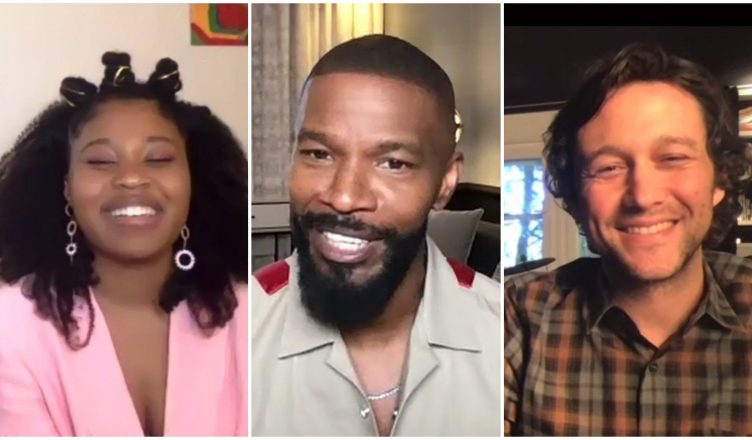 Project Power is the newest film on Netflix starring Jamie Foxx, Joseph Gordon-Levitt, and Dominique Fishback. The film is about a former soldier who partners up with a cop and young student as they try to find the source of a powerful street drug that gives its users superpowers. We got a chance to chat with the cast about the film, their characters and some of that ties into society today.

The Movie Blog: There is a bit of a Sci-Fi element to this film with the drug usage, but there’s also that real life component about exploiting populations of a vulnerable inner city. So I’m curious what are your thoughts on if that power pill were actually real and what impact do you think it would have on the current climate of racial injustice?

Jamie Foxx: That’s an incredible question, man. You would hope that that power would be able to straighten things out. I think if I had that power, my power would be to take my vision and let you see it from my perspective. The problem is that no one is looking, or no one tries to see from what your perspective is. I think that what we’re dealing with now, it’s like that 8 minutes and 46 seconds that was…God bless him and his family… George Floyd and his family. But it also did something that I think we will forever be changed. Because people got a chance to see through our eyes. I think that’s the key to everything. The key to everyone. Anyone who’s crying out, regardless of color, race, gender, whatever it is, and the person who is crying out. If you’re able to see what they feel…if you’re able to feel what they feel, that’s the best power of all.

Joseph Gordon-Levitt: Yeah, it’s a really good question. It generalizes a lot. Because I take the pill as sort of a metaphor for technology, and there’s so much powerful technology and it’s coming more and more every day. In a way that technology can help with progress and it can move the human race forward. And, maybe there’s an example you could make with how people are communicating around the protest today and raising voices and trying to affect political change.

There are also downsides to some of the powerful technology that’s coming around, and those same technologies that are fueling the protests in a certain way, have been shown to help extremists, to help bigotry, help authoritarians. I don’t think it’s a coincidence that Donald Trump won when he’s by far getting more traction on Facebook than [Hillary] Clinton was. And you can see it all over the world where social media is being leveraged by authoritarians.

…As far as the pill being a metaphor for technology, it’s always, and I think a question whenever there’s a new powerful technology, ‘how is this technology to be used? Is it going to be used to help? Is it going to be used to harm and or is it going to really benefit everybody? Or is it just going to make a lot of money for a few people?’ And these are the questions that, do underlie this movie. Look, in a lot of ways, this movie is a popcorn movie. You can just have fun watching, but if you want to, you can really find some of these questions and it can spark these kinds of conversations.

The Movie Blog: You know what, let’s run with that a little bit more if you don’t mind, because you’ve played a police officer in multiple roles in other genres and your character in the film, I got to be a little honest, kind of gave me a little bit of pause. So if this pill were real, how would you feel if police officers really were taking superhero pills to fight crime?

Joseph Gordon-Levitt: Well, police officers are armed in incredibly powerful ways, probably arguably a lot more than they need to be. I’m not an expert, but it is just as a layman seeing the kind of militaristic technology that police are equipped with nowadays does seem excessive to me. And it’s just, that’s again, like is technology being used to help or is technology being used to harm? And I would not feel comfortable, with police officers using this pill to fight crime. I would think that probably a lot of the solutions that are needed aren’t going to be solved with more violence or, more brute strength. Like there’s probably other ways to try to address a lot of the things that cops are being asked to address nowadays.

The Movie Blog: Dominique, did you want to weigh in on that?

Dominique Fishback: No, absolutely not. I would not want any cop taken any kind of pill. I feel like they already have the power. They clearly are getting off for blatant things. Breonna Taylors’ murderers are still free. So absolutely not.

The Movie Blog:  The character Robin is really interesting to me. On one hand, she’s doing what she’s got to do to help take care of her mother and all that. But on the other hand, she’s a drug pusher. How do you reconcile that, and what resonates with you with Robin?

Dominique Fishback: It’s so interesting because the first time when the storylines started coming out about what’s going on, [in regards to] an ex-veteran and cop  and a teen dealer, and I’m like, ‘Who’s this team dealer?! Because I don’t know who they’re talking about.’ It never crossed my mind that Robin was a dealer at all. I didn’t think she was a drug dealer….I must’ve been blinded by all the good things that she is, and the true nature of who she is, and what she needs, and what she thinks she has to do. She’s just turned 16 years old. Her mom is sick. She doesn’t have a dad.  If she loses her mom, she has no one. She has nothing. So what else is she going to do?

So no, I didn’t have to reconcile at all. I actually didn’t. I didn’t think about it. I just thought about who she was and all of the things that she was trying to do. I mean, the fact that she’s able to see people for who they truly are…who they really want to be… as opposed to the facade that they’ve given. Just like she tells “Frank”, why is he a bad guy? Because he’s done some bad things? [Robin] does bad things too, and she’s not saying he’s all good or you’re all bad. She’s just saying everybody does it, but she looks past that to see who Frank is. She looks past that to see who Art really is. I’m sure she did the same thing for Newt and for anybody else that she comes in contact with.

The Movie Blog:  I’m actually going to give you both the super power to convince people. So now that you’ve got it, tell the people out there why they absolutely must watch Project Power on Netflix.

Dominique Fishback: You absolutely must watch Project Power because this is an opportunity given to see a young, black girl take up space in that way. I’m obsessed with “Man on Fire” still to this day with Denzel and Dakota Fanning and Natalie Portman in “The Professional”.  We never see young black girls take up that space. So taking me as much as I can out of the idea, and just focusing on the character and who [Robin] is… I just think that we’re asking for support. We’re asking for diversity. We’re asking to be seen in all the multifaceted ways that we have to offer. I think this is one of those opportunities, and then it has Jamie Foxx, and Joseph Gordon-Levitt, and Machine Gun Kelly, and Rodrigo, and just so many cool people. Courtney B. Vance like, come on!

Joseph Gordon-Levitt: Well [Dominique] said, she wants to take herself out, and I’ll put [her] back in. Because to me, if there’s one reason to see this movie it’s for [Dominique]. She’s my favorite part of this movie. As a fan of actors and acting, it’s always exciting to see just a brilliant young artists emerge like this. I’m fully convinced that Dominique is going to have a long career ahead of her. I’m so, so happy to have just gotten to collaborate with her and to become friends. So yeah, if for no other reason, just check out this brilliant young artist. Watch Project Power. 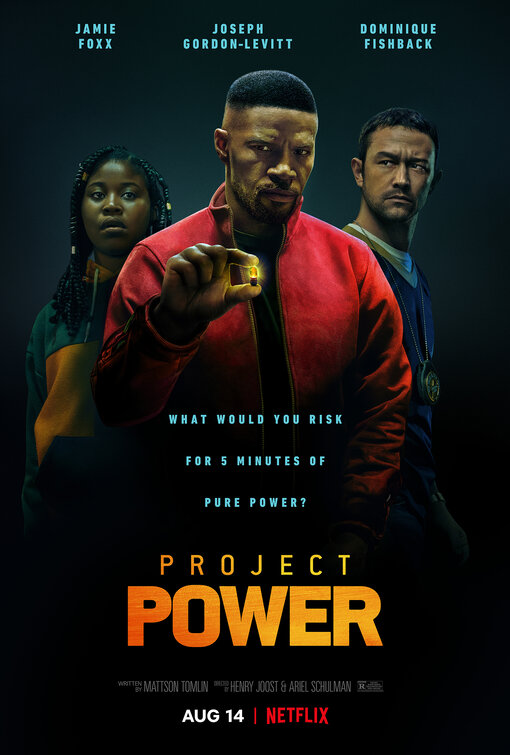