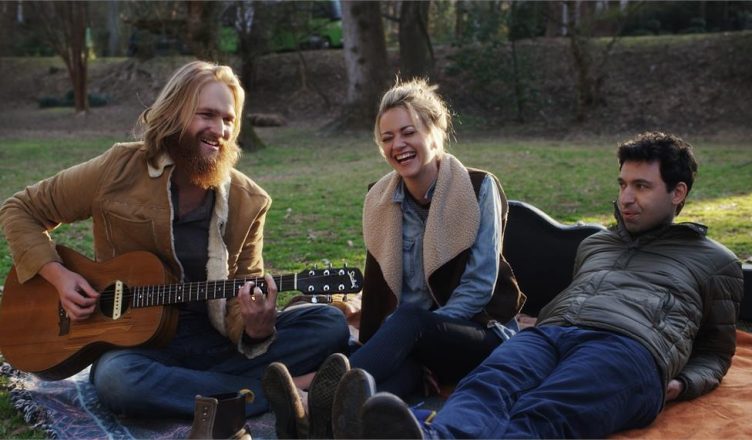 Recently dumped by his fiancée and with a stagnating standup routine, aspiring comedian-slash-copywriter Paul (Alex Karpovsky) is stuck. The manager of the club where he performs suggests he take some time off to update his comedy material, and in waltzes his childhood friend Jason Black (Wyatt Russell), an acclaimed folk-rock musician about to embark on a solo acoustic tour of the east coast. Jason suggests Paul needs to get his mojo back—and he should start by opening for Jason on tour. They set off on the road together, picking up a new act (folk singer Bryn, played by Meredith Hagner) on the way. But when Jason reveals an ulterior motive behind the tour, rifts are exposed in their otherwise affable camaraderie. Folk Hero & Funny Guy is a music-infused spin on the road-trip buddy comedy.

Comedy is generally not my go-to genre for film. So established, after a run of flicks ranging from downer to downright demoralizing, I thought it high time for something a bit on the lighter side of celluloid offerings. That’s when it struck me that the new indy and largely Kickstarter-funded road-tripping buddy dramedy “Folk Hero & Funny Guy” may be just what I needed. I don’t if I needed it exactly, but it did fill the bill in terms of worthwhile, engaging and ultimately quite amusing fare.

Wyatt Russell is Jason Black, a take it as it comes popular folk singer and serial one-night stander who looks like he strolled in straight out of 1969. And I mean that in the strictly coolest sense. Russell can actually play and sing. Together with aspiring singer/songwriter Bryn (the breathtakingly adorable Meredith Hagner in a thoroughly appealing and natural turn) this talented pair generate genuinely impressive solo and duo performances, both acoustic and electrified, throughout “Folk Hero & Funny Guy”.

Alex Karpovsky (HBO’s “Girls”) is the third component of this makeshift three-ring traveling circus of entertainment as a struggling stand-up comedian who is looking to revive a crashing career. His character of Paul eventually emerges as the unlikely inspiration for his two partners to change their lives for the better.

Writer/Director Jeff Grace does a fine job of keeping it loose and low-key through most of his movie. Still, a cluster of these character’s lines as well as some of the scenes come off as forced and contrived here. And one would imagine that after the first several occasions of Paul meeting with nothing but coughs and crickets during a lame and out-of-touch bit about “Evites” he would stop doin’ the bit for crissakes. But these interludes of awkwardness and less than authentic affectations are few in number, and Grace capably keeps both the momentum and the music cranking for well more than the balance of the story.

As “Folk Hero & Funny Guy” comes to conclusion, this is the takeaway that left me saying softly to myself, “Aww. That’s sweet.”

The notion that a self-professed “dick” can actually wind up being a pretty damn decent dude after all.