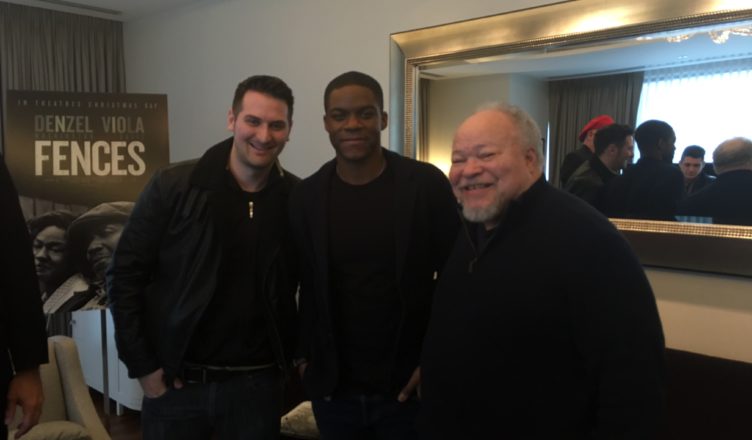 Denzel Washington’s upcoming movie Fences (based on the August Wilson novel) is a riveting story of family dynamic. I had a chance to speak to two of the films stars Stephen McKinley Henderson and Jovan Adepo when they came through Chicago promoting the film. I was joined in a roundtable interview along with some outstanding Chicago critics: Pat McDonald, Lee Shoquist and Jacob Oller. Stephen and Jovan discussed working with Denzel, what the film is trying to portray and a lot more. Check it out below:

LS: What the show is really about and also what this particular version is about (the movie) versus other versions:

Stephen: It’s so much about family, extended family, how you get to know yourself when you accept all the flaws in the other members of the family, you accept your own flaws, it fortifies you to survive whatever comes your way so it’s always relevant, it’s a timeless story. It’s about the human internist.

JA: What was it like for you guys to work with Denzel the actor and Denzel the director:

Jovan: To me he was a teacher the entire time and I used this opportunity to approach this as actors master class just being around him, Viola, Mr. Anderson and the rest of the talented cast. Everyday even when we were in scenes he was trying to see where my head was at, what type of choices I was making. As far as how he is with a directors hat versus the actors hat, I would like to say it was seamless.

Stephen: It was seamless and he was so fit, I just wondered when the dude slept!

I wish I got to talk to these guys more and get a few more questions. Both Stephen and Jovan were very polite and respectful. Jovan was definitely raised well with the way respectful way he speaks to people. I found both men to be intelligent and thoughtful. Well spoken. Stephen is just such a veteran actor and has this richness to him with his storytelling and opinions. Jovan was very humble and I was really surprised how he ended up getting into the industry and knowing Viola Davis’ family through church in Maryland, what are the odds of that?! Both men really have terrific performances in the film. Stephen has had quite the year, also starring in awards favorite Manchester by the Sea and one of my personal favorites The American Side. Jovan has definitely got himself a bright career ahead, hard to dispute it with Denzel’s blessing. I enjoyed the interview and the great questions my fellow critics had, especially the thought provoking one by Pat McDonald.