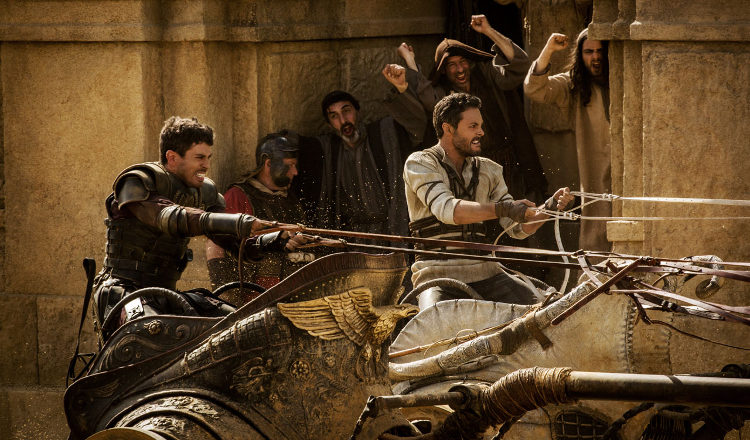 Synopsis: Judah Ben-Hur attempts to seek revenge against the Roman’s for taking away all that was close to him.

Jack Huston…we have a problem! The problem being the film you’re starring in, called Ben-Hur. The reboot of the 1959 classic, which starred Charlton Heston, doesn’t go according to plan. The modern version is just plain boring. For those not aware of the premise, the story is about Judah Ben-Hur (Jack Huston), a jewish prince, that’s charged with treason by his Roman adopted brother Messala Severus (Toby Kebbell). Judah ends up spending years as servant at sea, until he comes back to avenge his family and go after Messala.

The CGI could have been a disaster, but it ended up being used in a tasteful way. It’s not overdone, instead the grand scale scenes are the ones they save the fancy CGI for. The two main scenes being the attack at sea, and the chariot race. The set design and costumes were well executed. The set scenery looked and felt time appropriate.

The chariot race at the end was actually the most exciting part of this dull movie. It felt exciting and the stakes were played up to keep it engaging. Of course it had the cringe worthy moments of seeing the destruction of the horses.

I’m fishing for some more positives and I can’t find them. So, onto the bad..

I can’t even lie. I slept through a solid 20 minutes of the movie, and didn’t miss a beat. I won’t blame it on the sticky hot humid weather, or the long day at work. I fell asleep because the movie bored me and couldn’t keep me engaged. It’s such a slow moving movie with a bunch of pointless chatter that lacks direction.

The acting was mediocre. Jack Huston looked the part and wasn’t bad, but he was not even close to touching Heston. Toby Kebbell is an actor with a lot of potential that keeps getting himself involved with big budget disasters (see: Fantastic Four). No one stands out in the movie. Morgan Freeman was just okay as Ilderim.

The religious tie-in was out of place and didn’t connect well to the main story. Even though they didn’t do a bad job with the Jesus scenes, including one of him on the cross. It was the most impactful part of the movie. Even though I couldn’t tell him apart before the pre-groomed Judah (more on that coming up).

I can’t omit the scene where a complete disregard for any sense of reality was displayed when Judah takes a pair of “magical” scissors and attempts to cut his hair. The next time we see him he has a legit perfectly groomed beard and haircut that’s on-point. I wish I could find a barber that can get me that sort of grooming. These must have been some kinda scissors, or maybe Judah was meant to be the best barber of the century?

I sure hope for the production sake that they didn’t throw a gazillion of dollars into this movie, or else many might be losing their jobs. Simply put this movie is dull and boring, minus the chariot race. I fell asleep, woke up, and continued watching for a LONG time. The biggest shocker to me was finding out that I had only been in the theater for two hours! Not three or four hours that the movie felt like it was. The 1959 version might have been a three-and-a-half hour marathon, but in terms of feel, this one felt a hell of a lot longer than that. Ultimately, Ben-Hur(t) my patience.