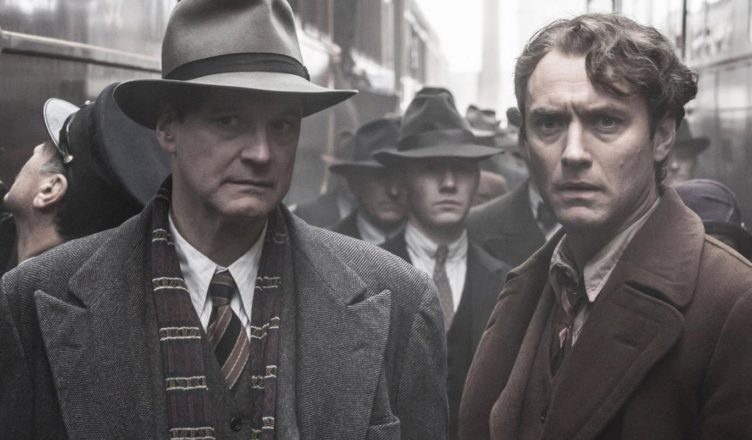 Synopsis: A look at the life of book editor Max Perkins and his work with famous writers Thomas Wolfe, F. Scott Fitzgerald and Earnest Hemingway.

It’s been a while since Jude Law’s name was being talked about among the top actors in Hollywood. Law resurrects his career and reputation with a terrific performance in “Genius”. The film depicts the life of Scribner book editor Max Perkins (Colin Firth) and the great writers he worked with. Among the writers whose work he oversees are Ernest Hemingway, F. Scott Fitzgerald, and Thomas Wolfe. Basically the greats of American literature. While the film features segments that are devoted to Fitzgerald and Hemingway’s relationship with Perkins. The one he has with Wolfe (wonderfully played by Jude Law) is the one that carries the movie.

The film really delves into the professional and personal relationship of Wolfe and Perkins, and it’s compelling. The “genius” of Wolfe is underlined through his numerous beautiful disasters. Wolfe struggled with his personal relationships, especially the one with his love interest Aline Bernstein (Nicole Kidman). On the professional end, Wolfe is portrayed as a borderline insane workaholic that would deliver carts filled with boxes of written work. Any man that wasn’t Perkins would have gone crazy just on the thought about working with a guy like that. The understanding and appreciation Wolfe and Perkins had for each other was special. True friendship and admiration for each others work.

Jude Law really puts his soul into the role. He is a bit over-the-top with manic exuberance, but you can’t imagine Wolfe being anything other than what Law portrayed him to be. Firth is also tremendous as the more reserved Perkins. His calm demeanor and belief in Wolfe resonates through the ups and downs of their friendship. It’s as if Perkins was a best friend and father figure that Wolfe needed in order to function. Both actors capture the sincerity between both men.

I found this movie provided me some insight and knowledge on these great American writers. I hear about Fitzgerald and always made an immediate connection to The Great Gatsby, never did I have a clue that the man dealt with money issues, or having to support his mentally ill wife. I didn’t really know much about Wolfe either. This movie gave a great outline of who the man was. It’s fascinating to see these great minds interacting and having dinners together.

In an age of digital technology takeover, a movie set in the early 1900’s that centers around book publishing is a rarity. I appreciated a film being bold in the middle of summer blockbuster season to be so different from the rest. It reminded me a lot of “Trumbo” just by the look, feel, and story material.

The movie is fairly slow, I found myself bored at times. It takes a bit to get your attention. The most powerful and sentimental moments don’t arrive till the end. It’s nice to see there be an emotional payoff, but the lack of it throughout the movie sort of threw me off, even though the ending is strong. As much as the interaction and story between Wolfe and Perkins is well depicted, I would have liked to see more time devoted to Perkins interactions with Hemingway and Fitzgerald. They were sort of teased, but never fully featured.

“Genius” is a fall awards kinda movie that gets released in the summer season, odd choice, but bold. Perkins, Fitzgerald, Wolfe, and Hemingway were Americans, but in the movie they were played by Brits. American actors can’t even get parts in biographies about Americans?! I’m not going to debate the choices of these fine actors. As much as books may seem extinct, there is still a vast amount of people who read them outside of school purposes. Books still matter and this film points out their importance and how these great minds shaped the future of literature.