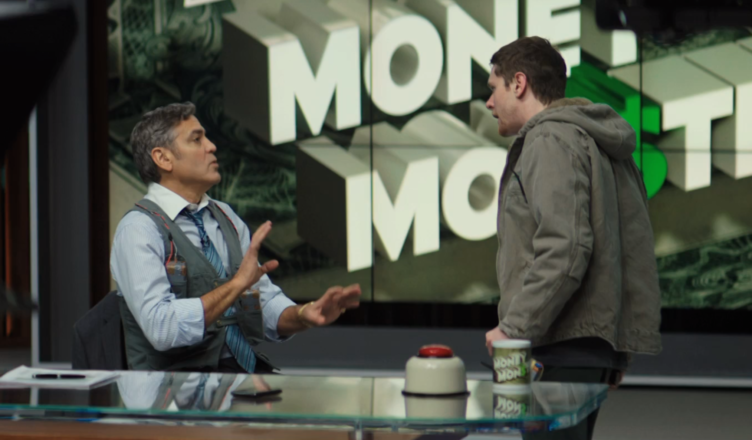 Synopsis: A financial TV host is taken hostage by an angry investor that’s looking for answers.

If you were hoping for a movie that blends financial corruption with a hostage thriller, then “Money Monster” is the movie for you. Director Jodie Foster (yes, the actor) is delivers a compelling film with plenty of thrills and suspense. If she keeps doing work like that she will start being referred to as “director” not “actor” Jodie Foster.

Lee Gates (George Clooney) is a popular financial television host whose show theatrics are as memorable as his financial advice. Running the show is his longtime producer Patty. Who must be the most loyal and patient producer in the industry. A typical day at the studio goes terribly wrong when Gates is taken hostage by an angry civilian that’s demanding answers to his stock investment gone bust. What ensues is an intense struggle to survive while the whole ordeal is being broadcast on national television.

The scary part is that in today’s society where daily activities such as going to school, movie theater, work, or various other parts of everyday life are being jeopardized by crazies with guns. So a television station being invaded by someone with a weapon is unfortunately not inconceivable. It’s a scary thought that a movie like this feels more real then ever before.

This isn’t your typical hostage movie. On the surface it might seem plain. Some bum manages to get through security and invade a live taping of a TV show. Holds the guys hostage till there is some sort of payout. Not the case. The apparent civilian baddie Kyle (Jack O’Connell) has a clear objective and purpose. What makes things interesting that his character has a compelling reason why he’s doing what he’s doing. He lost everything, but he is sacrificing himself for all the people who have been done wrong by a big corporation. He’s sort of an anti-hero. Someone whose actions are bad, but intentions are noble. Foster manages to shade the characters objectives and personas in a way where you see two sides to the story.

George Clooney plays eccentric financial television host guru Lee Gates. Think Jim Cramer from MSNBC’s Mad Money. It’s obvious where the inspiration was taken from. This is the kind of role that Clooney excels at, feels natural watching his charm and charisma explode on-screen (no pun intended, I realize he’s being held hostage). Julia Roberts character Patty is the unsung hero of the story. She’s the glue that holds this incident from becoming a disaster, while being a buffer between Kyle and Lee. A really nice subtly impactful performance from Roberts.

In the second half of the movie the story turns and sort of flips the script on what’s been apparent to that point. It goes from being a hostage movie to a commentary of society. That’s where the fun and entertaining movie digs deeper and becomes a social commentary. I really liked that reveal. It adds another dynamic and smarts to the film. Surprisingly humor is well entrenched throughout the film, including the intense moments. One a side note, the film is barely over an hour and half, which not only was fitting but refreshing that it moved at a great pace and didn’t drag.

Some of the things that make this film really good is what makes it a bit farfetched. When the hostage situation is taking place, not only the entire country is tuning in, but the entire world. I get that news travels fast these days, but would people all over the world stop track in pubs, work offices, etc. to watch a hostage being broadcast on live television? Maybe they would, but seems a bit over-the-top.

It was a pleasant surprise to see humor interjected frequently in a movie you wouldn’t have suspected due to the theme. The one-liners were snarky and witty, but at times it was just too much. When you start deflecting the intensity of the situation due to the overabundance of humor, then you’re hurting the believability of the hostage situation. Would anyone really fire spitballs at a pissed off and deranged guy with a loaded gun? Maybe only Clooney can pull-off stuff like that? I’d rather have seen his character tone it down a bit, at least during the intense moments.

Point blank, “Money Monster” is a really good movie. It has humor, intrigue, suspense, entertainment, and some legitimate commentary of today’s society. The latter being the part that I found most compelling. Leaving the theater this film should make you think about how we react to news and social media. Do we just care about being part of the news and being part of the conversation when something significant happens? The film aims at the cynicism among ourselves and in our society. It’s sort of a minor wake-up call to millennials and the non-millennials who have given into the social media and electronic devices that seem to rule our lives. Ultimately “Money Monster” isn’t really about money as much as it is about the “Social Monster” that lives among us.