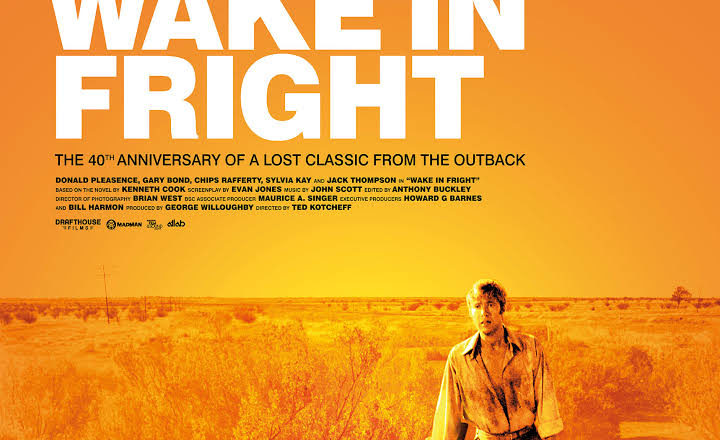 I have found Australian cinema to be roundly satisfying, particularly as regards recent entries.  However, I’d like to go back some four and a half decades if you’ll so indulge to discuss a film that even now delivers one helluva wallup.

1971’s “Wake in Fright” follows an English school teacher (the late Gary Bond, in a brutally grueling role) from his lonely existence in The Outback, through his shocking and systematic disintegration at yet another desolate Australian outpost, and then back home again.  He emerges very much a shaken and changed man all the way to the corrupted core of his tortured soul.

Those life scarring five days he spends in the dehumanizing clutches of the dead-end mining town of Bundanyabba can only be described thusly: As a completely drunken and base submission to disturbing debauchery and impulsively primal animalistic miscreant misbehavior.

Donald Pleasence (who, in a rather haunting coincidence, passed in 1995, the same year his “Wake” co-star Bond died of AIDS) delivers an unhinged, yet unforgettable, performance as an alcoholic quack doctor who has long since succumbed to an engulfing madness from which he will never escape.  Nor, we come to understand, does he wish to, having completely lost even the remote possibility of embracing any other state of being.

I must offer this word of caution should you be considering experiencing “Wake in Fright”.  If you are a devout and passionate lover of animals, I feel compelled to warn you NOT to watch this film then.  There is a considerable stretch in the story that you are bound to find beyond upsetting and intolerable.  And the Producers make it clear at the movie’s conclusion regarding these scenes that what you were watching was not movie-making magic.  It was very much real.  And it was absolutely sickening to witness.

It is not easy to digest what is dished out here by Director Ted Kotcheff (“First Blood”, “Uncommon Valor”), but “Wake in Fright” is essential film-making if you fancy yourself at all a fan of no frills immediacy and raw realism in your entertainment consumption.