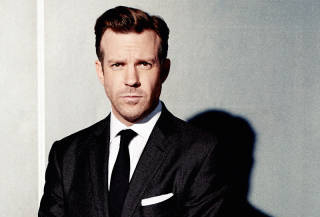 We’re The Millers hits theatres next month. Jason Sudeikis stars as a small-time pot dealer. He is a sweet, funny guy. On the lead up to the movie’s release, why not share a few quotes from a recent interview in ELLE magazine with Mickey Rapkin. (I might add here that the interview is totally non-We’re The Millers related, but funny nonetheless.)

On having a major crush on Ellen DeGeneres in college:

On having other crushes:

JS: “Whoever was in my father’s Playboy. He had a subscription. I joke that I grew up with an early version of the Internet. I remember, in preschool, finding them in the bathroom under the sink in my house. They might have been next to the toilet at that point. Who is going to think a five-year-old would look at that? And then cut out pictures to bring to school….”

On the public perception that he is punching above his weight with Olivia Wilde:

JS: “I don’t get upset about it. I might have a moment of gangster flare-up. It’s more like, You don’t know me!”

On fiance, Olivia Wilde, helping him to lose a little weight:

JS: “A lot of it comes from tiny things, like not eating barbecue sauce with my pizza at two in the morning.  It think it’s all a manifestation of being happy and wanting to treat myself well.  The truth is, I’m not getting up an hour earlier and walking on a treadmill.  I have the greatest workout partner in the world.  And you don’t need a gym membership for that kind of workout.”

JS: “Sex was probably scarier.  I wasn’t as concerned that my parents were going to walk in in the middle of my first sketch.  There are security guards there.  That’s a big part of it.”