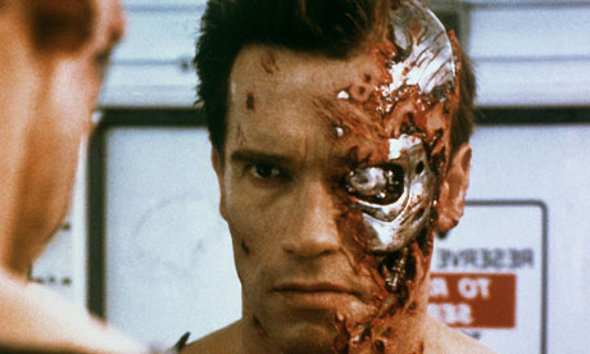 Earlier this year the internet got super excited because Fast and Furious director Justin Lin began attaching himself to projects the tingled all sorts of nerd-endings, few moreso than his verbal attachment to a proposed Terminator 5. Time passed and Lin exited the project but today we’re hearing that the film is still moving toward production, Megan Ellison secured the rights to the Terminator franchise which she assured us will be Rated R, and Governator is still locked in for the flick and maybe another.

Megan Ellison, the super-producer behind Annapurna Pictures, has finally closed the deal with PacificCorp to gain the rights to THE TERMINATOR franchise. While director Justin Lin is no longer on board as director, Ellison does have Arnold Schwarzenegger committed to appear in the film…

…The Ellisons own the rights to THE TERMINATOR until 2019 when they revert to James Cameron. The pair are hoping to squeeze out both TERMINATOR 5 and 6 before that time.

I can’t stress the importance of getting this project completed before the rights fall into the clutches of James Cameron. Cameron is notoriously commited to directing Avatar films, and at some point in the future a Battle Angel movie, for the foreseeable future.

I like the idea of bringing Governator back into the picture… to an extent. It’s no doubt that his chiseled mug is the widely associated with the films, but revolving the film around his character didn’t get the critical response in that 3rd film that producers had hoped for. Partial blame can be attributed to the formulaic approach of that film, but another thing to consider is that Schwarzenegger just seemed to be too old or viewers finally realized they weren’t in their seats due to his uncanny acting ability. Either way, this could be a gift or a curse but getting “something” is better than “nothing”… right?