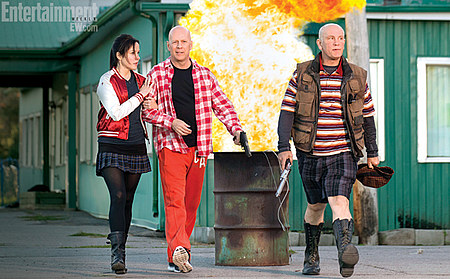 It’s been quite a while since we looked at one of the seemingly dozens of films pending release that have the benefit of Bruce Willis’ name being attached to them, how about another look at R.E.D. 2? A new image has been released featuring Mary Louise-Parker, John Malkovich, and Bruce to remind us that D.C. has another comic related property releasing that’s not named ‘Man of Steel’. Check it out: Nice photo.  Doesn’t really say much other than showing that they still dress like old people, and by the looks of that flaming drum behind them they’re still pretty f’n dangerous. That works.