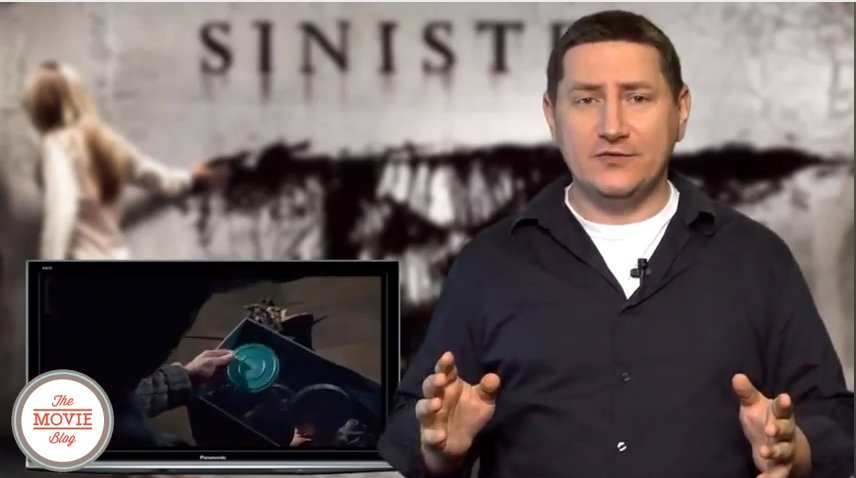 Hey there guys this is John Campea for The Movie Blog here to give you my quick review for the new horror film SINISTER. Sinister stars Ethan Hawke as a true crime writer who was once wildly successful and believes he can recapture his former glory with a new book based on the grisly murder of 4 member of a family and a 5th member, a little girl, who has gone missing. For reasons only making sense to stupid people in horror films Hawke decides it’s a good idea to research the case by moving himself and his family into the murdered family’s house… and wouldn’t you know it, eerie creepy stuff starts to happen.

Let’s start with the good things about SINISTER. First and foremost is the performance of Ethan Hawke. I’ve never seen Hawke in a straight up horror film before. Not only does he completely sell me on his character, but he sells me on his fear and his slow decent into madness that never feels forced or acted. It really is one of the highlights of the movie. Also, GREAT horror films give you a story outside of the horror elements of the film that give the movie a depth and a relatability to the experience. SINISTER is almost as much about Ethan Hawkes desperate attempt to recapture success as it is about the Demon Bagul and as a result you’re more immersed into the “reality” of the movie, which only makes it more creepy. Speaking of creepy, SINISTER is it… CREEPY. Director Scott Derrickson, who also directed THE EXORCISM OF EMILY ROSE does a really fine job of building the tension and stress, especially in the first 2 acts of the film.

On the negative side of SINISTER, I found the single biggest mistake the film made was a simple short shot that you actually see in the trailer. Ethan Hawke is on the phone with his open laptop behind him with an image of the demon BAGHUL on it. As Hawke is talking on the phone and looking away from the image, the demons face unfreezes and turns to look at Hawke. To me, this KILLED the tension in the movie. Part of what was making SINISTER so creepy up to that point was the beautiful subtlety of the horror… when BAGHUL’s face turns on the computer screen it almost felt like a joke, the subtlety was gone and the movie was never able to recover it from that point on. Also, the ending of the film is quite disappointing in that they reveal the end… before the end happens. Without giving too much away, think of the classic ending of THE USUAL SUSPECTS when it’s revealed that Verbal Kint was actually Kisar Sosee. Amazing right? Well now imagine that 3 minutes earlier someone else already reveals that? How lame would that be? Sound confusing? When you see it you’ll know what I mean.

Overall SINISTER is a fairly creepy, extremely well acted horror film with a solid idea that unfortunately doesn’t really live up to its own potential due to the fact that it moves away from the subtle into the pure shock value kind of scares which drained a lot of the life out of it for me. Still, for me the positives outweigh the negatives and I would recommend giving it a shot.