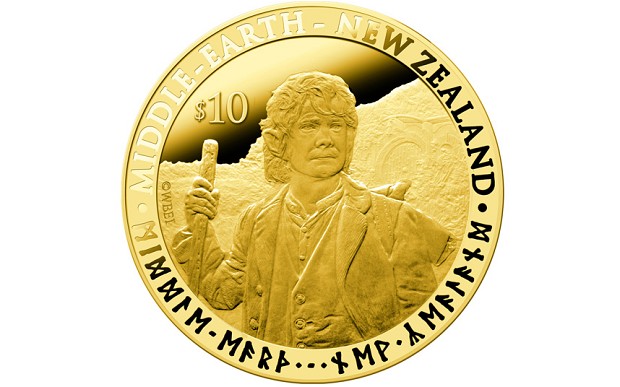 A New Zealand $10 coin showing the image of Bilbo Baggins will become legal tender. For you collectors or general Tolkien enthusiasts out there, it’s a chance maybe to own legitimate ‘Middle Earth’ currency that isn’t so fantastical after all. Check out the image above and the article for more information.

Hobbit coins, featuring characters such as Bilbo Baggins and Gandalf the wizard, will be legal tender in the country, New Zealand Post said – although their face value will be only a fraction of the cost collectors will be expected to pay.The most expensive, made from one ounce (28.3 grams) of pure gold, costs more than 350 times its face value. It will set Tolkien enthusiasts back NZ$3,695 (£1890) but has a face value of just NZ$10 (£5).The cheapest is available for almost 30 times its face value – a NZ$1 (£0.50) coin retailing for NZ$29.90 (£15).The coins go on sale from November 1 and New Zealand Post said it expected strong international interest in the build up to the premiere of the first of the three Hobbit movies in Wellington on November 28.

Jackson, who was responsible for the Oscar-winning adaptation of Tolkien’s “The Lord of the Rings” trilogy, announced earlier this year that he would make three films from “The Hobbit” book, rather than two as originally planned.

British actor Martin Freeman, from The Office, takes on the central role of Bilbo Baggins, who is swept into an epic quest to reclaim the lost Dwarf Kingdom of Erebor from the fearsome dragon Smaug.

New Zealand enjoyed a huge tourism boom after the original trilogy and is hoping to repeat the success with the Hobbit movies, launching a campaign branding the country “100% Middle Earth” to coincide with the premiere.