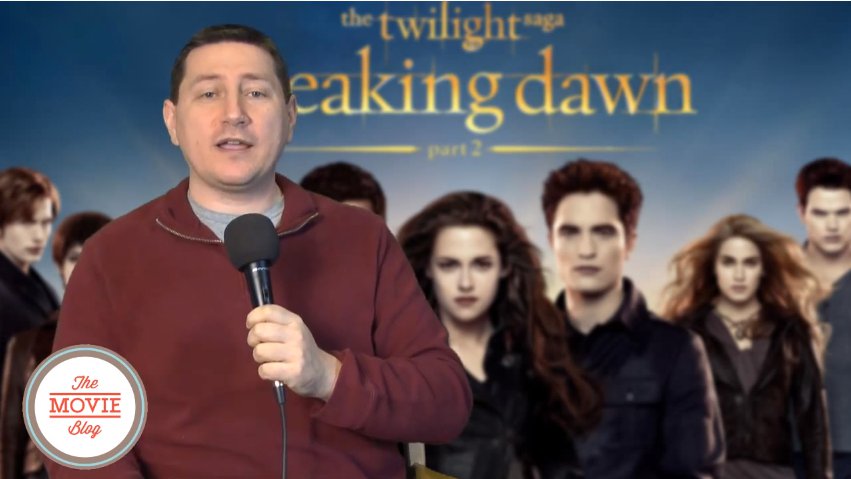 Now look, most people fall into 1 of 2 categories when it comes to the Twilight series. Either they’re blind Twilight lovers who refuse to acknowledge any problems with the films, or on the other side, they’re blind Twilight haters who refuse to acknowledge anything good about the films (even though most of them have never seen more than 1 of them). Now, while I admit that I am no Twilight fan, and yes I have seen all of them, I make an effort to go into each movie and evaluate it on its own merits. I don’t care if I loved or hated previous films in a franchise, all I care about is the individual movie in front of me and is it, or isn’t it any good. So with that being said is this final Twilight film any good… you know what… yes… it actually is! Let me put it this way, Breaking Dawn Part 2 is like a standard Twilight film, except add 1 or 2 really good new elements, and then subtract 2 or 3 really annoying elements that have been in all the other films. What you’re left with is Breaking Dawn Part 2 and a pretty good movie.  Let’s start by looking at the positives and the negatives. On the positive side this is really a fresh new Twilight movie unlike any of the others that have come before it. In Breaking Dawn Part 1 the series wrapped up and finished several of its long running stories and themes with the birth of their new child and the death and rebirth of Bella as a Vampire. The old annoying “Oh Edward, I want you to turn me into a Vampire so I can be with you forever”, “No Bella, I don’t want you to be a monster like me and be damned” annoying as hell conversations that happened 20 times in each and every movie are now no longer needed and GONE. The whole beaten to death Team Edward or Team Jacob debate is over, the whole “Can their love survive” gimmick is done. All these layers of annoyingly over used devices and sloppy artificial sentimentality are GONE in Breaking Dawn part 2 because Part 1 closed the need for them off. Also on the positive side, ever since they were introduced I’ve wanted to see a LOT more of the Volturi and it was frustrating to me that these very interesting characters were hardly used at all. I mean holy hell… do I really need to see Bella moping around for 10 MORE minutes instead of showing us a few more minutes of Michael Sheen being awesome as Arow. Well, in Breaking Dawn Part 2 we get a lot more Volturi than in the previous films and as I suspected it made the film a LOT more interesting. I still would have liked to have seen more of them, but Michael Sheen SHINES every single minute he’s on screen. Another positive, for this movie to work at all Edward and Bella’s new daughter Renessme has to be so completely captivating, so cute, so precious that you as an audience member believes that she would captivate even the hardest hearted vampire. Well, little actress Mackenzie Foy does it… completely… totally… without hesitation. After watching her on screen for 5 minutes look at me in the eye and tell me you wouldn’t throw yourself in front of a truck to protect her. So now when all these Vampires seem suddenly willing to risk their lives for her in the movie… you actually have no problem believing it because deep down you know you would too. And no review of this film would be complete without mentioning the final big battle scene. I won’t beat around the bush here… it’s great. No it really is. It’s exciting, it’s fast paced, it’s well shot, it’s VERY surprisingly violent and best of all it’s filled with HUGE surprises that had the audience at the premiere in a frenzy. I’ll leave it at that so not to get into any spoilers… just know the battle is really top notch. And finally smaller things like the always solid performance of Billy Burke as Bella’s dad. Billy has been consistently the best actor in the series and given any real true heart to the franchise. The Cullen family (especially Ashley Greene and Peter Facinelli) bring nice touches of true sentimentality and humor when needed and the Wolves look great.

On the negative side of Breaking Dawn Part 2, there is still too much “Oh I love you so much” “No, I love you so much”, “Oh Iove you so much it hurts”, “No I’d die without your air in my lungs” nonsense. Look, the best on screen love stories are the ones that need very little outward explicit expression, and rely more on subtly. Twilight has always taken the approach that they need to hit the audience over the head with a hammer 1000x to get their point across assuming we’re all too dumb to understand it otherwise. Also, this film introduces us to about a dozen new Vampires that seemed like they could have been really interesting… but instead of giving any of them real on screen time to develop, all extra time was given to the aforementioned “Oh I love you so much” conversations between Bella and Edward and so I’m left feeling hanging with these new characters that COULD have brought a lot more to the story and movie experience as a whole. And finally, while the third act of the film moves along at a great tempo, the first two acts, while not dead, do feel rather slow. You can see things developing, but it takes you a while to get any sense of pace. Slow movies can have pace, and it’s ok to be slow sometimes as long as there is a cadence to the film that fits the story… the first 2 acts of Breaking Dawn lacks this

Overall, even though the film is a bit slow to get moving, still has too many OH I LOVE YOU SO MUCH dialog wastelands and not enough time given to secondary characters, the new feel of the film compared to the previous installments, the increased role of the Volturi, the excellent battle scene, the new version of Bella 2.0 where she’s now a Vampire and doesn’t have to mope around like a 10 year old brat who didn’t get the pony she wanted for Christmas all makes Breaking Dawn Part 2 not only the best film in the franchise, but also a legitimate good movie by almost any standard. I liked it, and I think if most people go into it with an open mind… they will to.