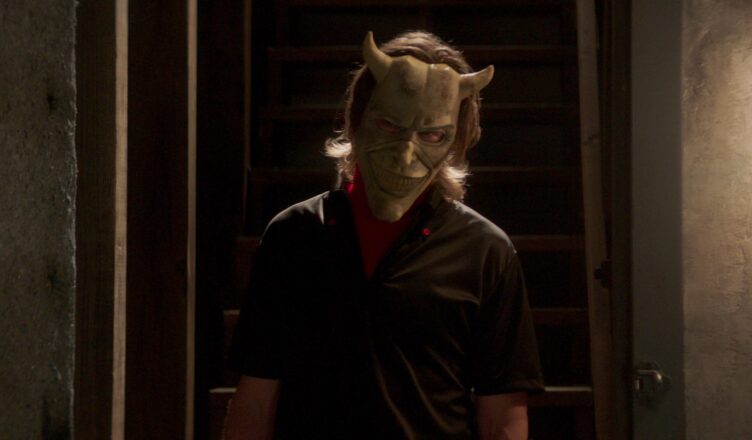 The phone is dead. And it’s ringing.

Director Scott Derrickson returns to his terror roots and partners again with the foremost brand in the genre, Blumhouse, with a new horror thriller. Finney Shaw, a shy but clever 13-year-old boy, is abducted by a sadistic killer and trapped in a soundproof basement where screaming is of little use. When a disconnected phone on the wall begins to ring, Finney discovers that he can hear the voices of the killer’s previous victims. And they are dead set on making sure that what happened to them doesn’t happen to Finney.

The Black Phone has a truly terrifying premise and gains my attention because the subject matter is child abduction. The Blackphone takes its time immersing you in its technologically deficient setting. This is a movie that takes place in a not too distant time but before cell phones and the internet was easily accessible. Child abduction seems more terrifying in a world where communication is slower. There are times we learn a new child is abducted only after sign postings and frightening scenes of flashlight searches in the woods. These signs are a frightening sight as the movie slowly familiarizes you with the threat of The Grabber.

Ethan Hawke gives a terrifyingly chippy performance as ‘The Grabber’. Hawke shows us a slyly sassy character who is both charismatic and threatening. The Black Phone boasts some great acting from kids Madeleine McGraw and Mason Thames. Both kids have the tough challenge of acting opposite both Ethan Hawke and Jeremy Davies and nail it. There are a lot of difficult emotions these kids are delivering and it works considering the subject matter. I like how this is a nicely interwoven plot and their family life resolves into the solution of the kidnapper. There are some supernatural shenanigans from here on out and we get just enough exposition to go with it and it works.

The Black Phone feels dangerous and there’s just enough on-screen violence to drive its point. The Black Phone also tells a coming-of-age tale for Mason Thame’s Finney that underlines the plot. The movie finds a great balance between the suspense and the violence in these moments that just works. I admit that I wanted more violence and gore in this movie but I walked away feeling satisfied in the end.

There’s not enough on-screen violence. Yes, The Black Phone did give JUST enough to eek by but there should be more. Most of the violence occurs off-screen, taking away from the threat of The Grabber. There’s a moment in the film where Ethan Hawke’s Grabber puts a knife to someone’s throat about two-thirds through the movie. That’s the first time we see the character actively engaging in violence in The Black Phone. There are moments of spookiness that redeem the Grabber but not enough to sustain that extreme threat for the entire movie.

There is all around great performances with the exception of a few buffoonish police officers. I thought I would like these characters but the way they stumble through the investigation is laughable. I’m immediately pulled out of the movie when these officers are on-screen and they distract me with their “investigation”. There are times when I just can’t believe the way they give their full confidence in an unexpectedly welcome source for information.

The Black Phone makes a cool summer date night movie and delivers on providing some thrills. The movie has a fun villain in Ethan Hawke and I can’t wait to re-watch it to see the intricacies of his performance. There are moments in the film that pull you out of the story but there are also great moments in the movie that pull you right back in.

The Black Phone Is Chilling

The Black Phone has a truly terrifying premise and gains my attention because the subject matter is child abduction. The Blackphone takes its time immersing you in its technologically deficient setting.