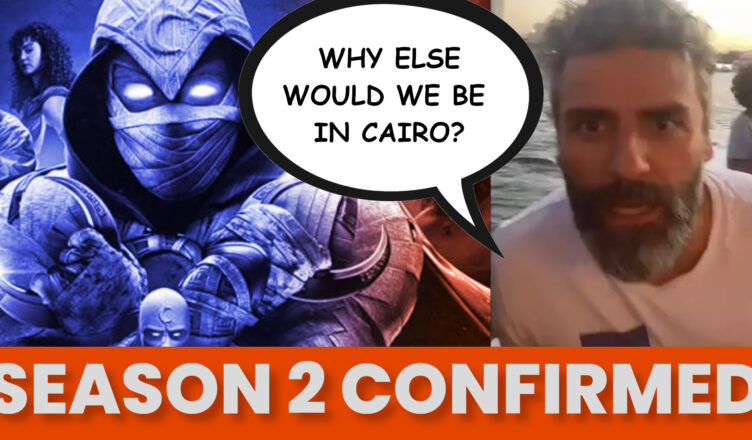 A TikTok from Mohammed Diab and Oscar Isaacs heavily implies Moon Knight will be getting a second season. Moon Knight premiered on March 30, 2022, and was an instant hit for Disney Plus. The series starred Oscar Isaacs as the titular hero and also starred Ethan Hawke, May Calamawy, and F. Murray Abraham. Moon Knight followed the split personalities of Marc Spector/Stephen Grant, who were granted the powers of an Egyptian Moon God. The two used their powers to fight evil and specifically battled the nefarious Arthur Harrow who was trying to raise the ancient goddess, Ammit.

Disney Plus has been knocking it out of the park with its MCU series, and Moon Knight is no exception. The series was different than anything Marvel has done in the past, but it still felt like a part of the larger cinematic universe. The first season of the show ended with a bit of a cliffhanger, and fans everywhere have been clamoring for a second season. Though no official announcements have been made, the cliffhanger and the success of the first season led many to believe Moon Knight Season 2 is a lock.

In a recent TikTok, Mohammed Diab and Oscar Isaacs were asked directly if Moon Knight Season 2 is happening. Diab just repeated the question, but Isaacs responded with,  “Why else would we be in Cairo?” This comment seemingly confirms that Season 2 is on the way and that they might already have started production. Or at the very least, pre-production. We know very little about Season 2 so far, but details and news are sure to come in the following months if Season 2 is actually on the way.

This is a no-brainer for Marvel. The series was a hit and received an impressive 86% on Rotten Tomatoes from critics. Fans were a bit more generous with a 91%, but overall the show was very well received.  The Season 1 cliffhanger definitely hinted that the show would continue on, and even before Oscar Isaac’s comment, I would have bet that Season 2 is happening. Most of the Disney Plus series, outside of limited run mini-series, get greenlit for a second season and most get a green light before the first season airs. There might be some technical things that need to get worked out like contracts and such, which would explain why we haven’t heard anything yet. But if Oscar Isaacs’ comment is to be believed, Moon Knight Season 2 is on the way and that’s exciting news. You can catch Moon Knight Season 1 streaming exclusively on Disney Plus now.

Series Synopsis: Steven Grant discovers he’s been granted the powers of an Egyptian moon god. But he soon finds out that these newfound powers can be both a blessing and a curse to his troubled life.