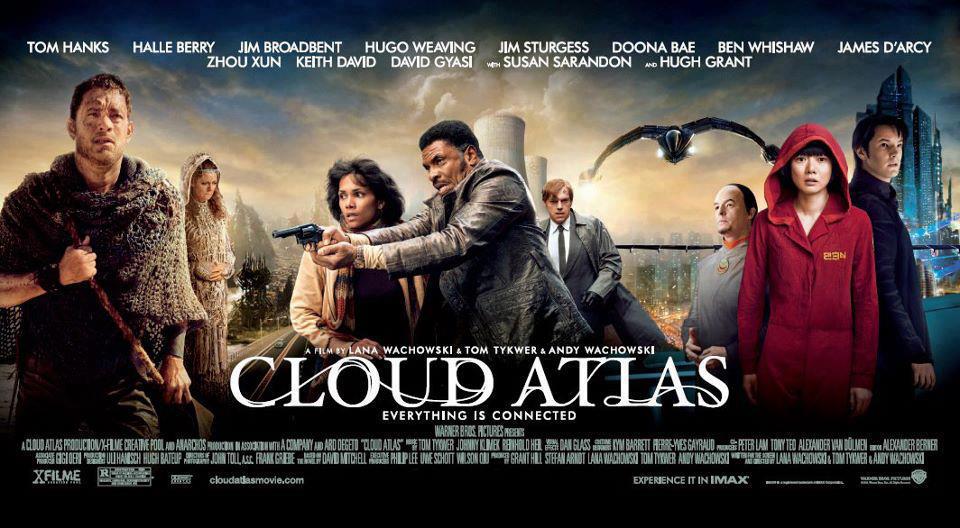 As per the press notes, “Cloud Atlas” was a collaboration of an established pedigree of filmmakers:

“The film is written for the screen and directed by Lana Wachowski & Tom Tykwer & Andy Wachowski. The Wachowskis previously teamed as writers/directors of the groundbreaking “Matrix” trilogy; Tom Tykwer won an Independent Spirit Award and earned a BAFTA Award nomination as the director/writer of “Run Lola Run,” and more recently directed the award-winning thriller “Perfume: The Story of a Murderer.”Based on the celebrated best-selling novel by David Mitchell, “Cloud Atlas” is produced by two-time Oscar® nominee Grant Hill (“The Thin Red Line,” “The Tree of Life”), three-time BAFTA Award nominee Stefan Arndt (“The White Ribbon,” “Goodbye Lenin!,” “Run Lola2Run”), Lana Wachowski, Tom Tykwer, and Andy Wachowski. Philip Lee, Uwe Schott and Wilson Qiu serve as executive producers, with co-producers Peter Lam, Tony Teo and Alexander van Dülmen, and Gigi Oeri as associate producer.
An ambitious and dazzling epic spanning five centuries, “Cloud Atlas” explores questions about life and purpose that humanity has contemplated since the beginning of conscious thought. With a kaleidoscopic array of action, emotion and urgent human connections that lights points along an infinite timeline, it suggests that individual lives continue their personal trajectories through the ages. Souls, reborn, renew their bonds with one another, time and again. Mistakes can be rectified…or repeated. Freedom can be gained or lost, but is forever sought.
And always, love survives.

Encompassing a range of genres and set simultaneously in the past, present and future, “Cloud Atlas” illustrates how events and decisions made by the people in one period can reverberate in unforeseeable ways across the timeline to touch the lives of others.” Shooting around Scotland and Germany, the production budget came in around $100 million. Considering everything splashed on screen from the set designs, costumes, and visual effects and the long running time, this is a relatively cheap production. In a Hollywood era where budgets are outrageous and out of control (“Men in Black 3” was reportedly over $200 million and didn’t look a third as good as “Cloud Atlas”), this is an alternative to what’s trendy in the industry. It is worth noting that a majority of the budget was independently financed. Technically, this is one of the most expensive independent films. With a low key wide release (1,950 screens), audiences will need to discover this sci-fi epic. Finally, “Cloud Atlas” ranks with “The Master” as one of the most polarizing films of the year. I was ready to write this movie off, but decided to give it a chance. I was incredible moved and fully engaged with the film. What holds back “Cloud Atlas” from being one of the best movies of the year was the subplot that could best be described as a post-apocalyptic tribe in the 24th century. This world reminded me of something out of “Battlefield Earth.” With its modest big budget, lavish visuals, and high concept non-linear story line, a movie like “Cloud Atlas” needs to be applauded and celebrated among cinephiles and not destroyed among petty arguments who aren’t willing to give it a chance. There will be haters who won’t hold back. Those who enjoy “Cloud Atlas” will fall in love under its enchanting, magnificent spell.
Comment with Facebook