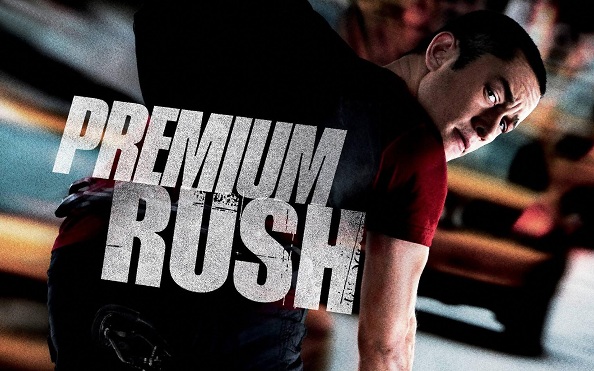 Synopsis: In Manhattan, a bike messenger picks up an envelope that attracts the interest of a dirty cop, who pursues the cyclist throughout the city.

After watching the trailer for “Premium Rush” I immediately expected another “extreme sport” type film that bombards you with a variety of fast paced stunts and action shots. With films geared around car racing, skateboarding, or some other dangerous, high energy activity; it is always the action and danger surrounding that activity that drives the plot of the particular film. Although I had hoped for this film to be more than another one of these films, it unfortunately was a lot like the others.

First and foremost, “Premium Rush” is in a genre (action/thriller) that is known for sometimes lacking in key film elements such as plot and character development. The area where action films succeed is the action and in this area the film delivers. “Premium Rush” is a fast paced adrenaline rush from start to finish and although the plot is generic and light, it is presented in a way that adds more detail and meshes well with the action sequences. The story is deconstructed by starting the film towards the end and filling in the details as the movie progresses. By giving the audience bits and pieces to the story, this simple story can seem a bit more complex by making the smallest details key elements to figuring out how the main character gets to the moment in time shown at the beginning of the film. Even though I thought it was smart to present the plot in this way, I still found the plot to be very stale and lacking. The story for this film has been done many times before in other films and although I won’t spoil the film for you, you can probably guess how the movie plays out from the trailer alone. There are some moments where the life of the Manhattan bike messenger is explored but not enough to give perspective. This is something I would have loved for the movie to elaborate on. I found those moments to be intriguing and thought it could have been substantial detail for the plot.

The characters in the film are just as simple as the plot. There is little to no time spent on developing them, which is fine if you expect a “Fast and the Furious” style film. The characters are deconstructed in a way similar to the plot, giving us bits and pieces along the way to define who they are in between the action shots. Along with a generic plot comes a list of generic characters. You have the typical crooked cop, the love interest, the hero, the hero’s rival, and there’s even room for a comic relief character. The hero is always given some superior ability which makes him unstoppable and although in this film it is biking, it could have easily been interchangeable with something like super powers, driving skills, or martial arts. The plot and characters serve little purpose because it is obvious from the beginning to end that “Premium Rush” is about the fast paced action shots.

Even with the plot and character development being on the weaker side, the film makes up for it with it’s adrenaline pumping, fast paced, action. The camera work is what makes this film. The shots are clear and fluid, capturing every bit of action from every angle and also setting the pace of the film. When being chased through the city, the audience gets to see every perspective of that scene which makes for more heart pounding moments. There are also scenes that show an overhead view of the city showing highlighted routes in a GPS type fashion. These scenes have the purpose of showing the distance to be traveled in lieu of the limited amount of time. In addition to the GPS scenes, there are multiple “route choice” scenes where the main character visualizes the possible outcomes of taking a certain route. Although this was reminiscent of the effect in the horrible Nicolas Cage film “Next,” it is a welcomed addition to “Premium Rush” as it demonstrates the main character’s thought process and adds a little humor.

Overall I would say that I enjoyed the film even though it was lacking in some key elements. It’s one of those films that you enjoy for the action and the camera work rather than the story and the characters. There’s nothing special about this film and it’s like many others in the genre, but I couldn’t help but enjoy it and laugh along the way. I don’t think I would pay to see this in theaters but I could see myself enjoying it once or twice in the comfort of my home.

An adrenaline pumping thrill ride that lacks in story