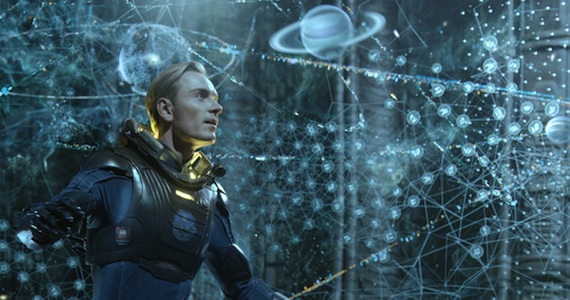 In 2089, archaeologist couple Elizabeth Shaw (Noomi Rapace) and Charlie Holloway (Logan Marshall-Green) discover a star map among several unconnected ancient cultures. This is interpreted as an “invitation” from the creators of humanity known in the film as the “Engineers”.  Peter Weyland, the very elderly founder of the Weyland Corporation, finances the creation of the scientific vessel Prometheus in hopes to follow the map to the distant moon LV-223.  The ship’s crew, composed of scientists, engineers, and biologists travels aboard “Prometheus”.  David, (Michael Fassbender), is an android that monitors their voyage. In 2093 the ship arrives and it’s crew, a sleep during this time, is told their mission is to find “the Engineers” by Director Meredith Vickers, (Charlize Theron), ordering the crew to not contact them.  The mission is to find them. Some things are discovered in the cave like structures, which for the sake of spoiling will not reveal any further details of the plot.

After speculation and an aggressive innovative marketing campaign, Ridley Scott’s “Prometheus” is a glorious sci-fi adventure horror treat for the fan boys. If one is able to tone down the hype to a rational level then  audiences will at least be captivated by the visuals of your smarter-then-your-average summer blockbuster. If you were one of ‘those people’ who dissected the trailers a few dozen times then the shock and awe might wear thin on you and you could possibly be let down. For me, who avoided trailer saturation, there’s so much more in Ridley Scott’s “Prometheus” then I was expecting.

Ridley Scott pours his talent and filmmaking experience into all of “Prometheus”. With stunning cinematography, captivating visual effects, crisp sound, thrilling intensity, and the dreary atmosphere Mr. Scott manages to configure all these fantastic elements into top-notch. The climatic shuttle launch and planet split, (as seen in the trailer), was a special effects bonanza and the use of 3D was astonishing and impressive especially during two scenes when you see the ships traveling in space and during the wind storm on the planet. The one characteristic which doesn’t deliver like all the other technical aspects is the screenplay. Fanboys who were drunk on hype could be hungover with disappointment in this area. Co-written by Damon Lindelof, (co-creator and executive producer for the television series “Lost”), “Prometheus” covers deep existential and philosophical possibilities on the creation of man without revealing a core theology.

The two best performances in the “Prometheus” came from the scene stealing Michael Fassbender and rising star Noomi Rapace. Fassbender has the benefit of more of a ‘character’ to play with as he portrays the android “David”. His motives are impure being the one character who is guided purely by a curious mind and has no sense of moral compass. Noomi Rapace is exploring on  a different level and is guided by her faith coupled flash back memories of a relationship with her father. Rapace plays a tough heroine extremely well and she is featured in a scene so shocking, and somewhat sickening, that it might be the most memorable moment in the film. I kept thinking back to that gruesome moment days after my screening of Prometheus and realized it left a long term impression. Without spoiling the ending, it seems obvious a sequel is pending and how the origins of other creatures came to be. As David the android says, “Big Things Come From Small Beginnings” indeed.

I have a feeling the “Prometheus” has enough plot twists and lingers enough unanswered questions that it will confuse and possibly alienate some audiences looking forward to a gory “Alien” movie. This is a shame. There are obvious moments where references to other “Alien” films and in a summer with dumb sequels, stale CGI, and weak scripts “Prometheus” sets the bar pretty high for technical wizardry for 2012 and maybe even the next few years beyond.