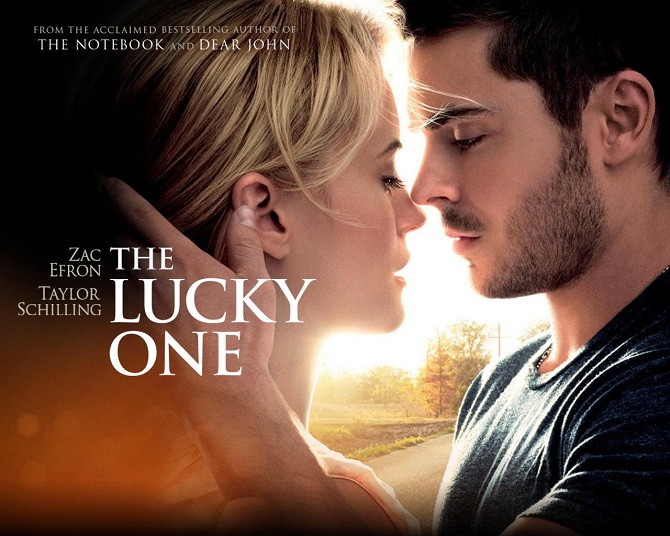 Synopsis: After serving in Iraq, a Marine searches for an unknown woman who he believes was his good luck charm during the war.

In life there are sacrifices. Friday nights are one of those sacrifices known as “Date Night” where you must give in to your significant other’s demands in order to keep the beast at bay. Giving my girlfriend one night a week ensures that I get a few good hours of guilt free gaming and a good minute and a half of nighttime nookie. This week on The Movie Blog’s Chick Flick Friday, I will be viewing The Lucky One while the other writers of The Movie Blog will be judging how many Man-Points I will lose by seeing this film.

Since this is the first Chick Flick Friday, the ability to retain my Man-Points must be put to the test. I will be facing the epitome of sappy chick flick genres, a film based on a novel by Nicholas Sparks. To endure this film in its entirety I will need to reach into a dark place deep within my soul and hope that I can return. If I am able to return from this dark place, I will provide our audience with a review and even give my girlfriend’s take on the film. On top of this I hope I can maintain some form of dignity and retain an adequate amount of Man-Points to slowly rebuild my masculinity. I only hope that the ridicule and torment from my friends here at The Movie Blog is at a minimum and they are conservative in taking my Man-Points from me, but I am guessing they won’t be too kind…

First let me paint a picture for the ladies. Let’s take Zac Effron out of the equation temporarily and replace him with a not so attractive balding male named Joe. Let’s say that Joe finds a picture of you in some random place and begins to obsess over that picture. From his obsession he builds this idea that you and him have some sort of special connection and decides that he must find you. He scours the internet day and night to see if he can find a lead on where you might be and travels across the country looking for you. After asking a bunch of random people if they know who you are, he finally gets a lead and heads to your home. Without telling you anything about himself he convinces you to give him a job and then he rents a place within walking distance to your home. Eventually you find your picture in his possession and discover why he’s there…is that the romance you’re looking for?

Before the ladies have their preemptive assumptions, I am not against watching “chick flicks” or romance/romantic comedy films. There are quite a few that I do enjoy but this film failed in almost every aspect of film-making.

The beginning of the story is rushed to go immediately to the romance. It starts in Iraq and speeds through the war scenes with a brief break for Effron’s character Logan to find the picture of the girl he is “destined” to meet. The pace then picks up and almost seems to fast-forward up to the point where he meets the girl in the picture, Beth (Taylor Schilling). Even his search for her is rushed which is extremely unbelievable that anyone could find someone from just a picture with such a small amount of research. The plot is very light from here and I think it is due to the rushed back story. There is no time given to identify with the characters and all of the emphasis is placed on the romance which is not very romantic when you cannot identify with the characters. To summarize, the entire plot is built around the anticipation of when Beth and Logan will get together and how she’ll deal with his reason for seeking her out. There are small side stories with Beth’s grandmother (Blythe Danner) and her son (Riley Thomas Stewart) but these sub-plots are also centered around their relationship with Logan and just supplement the chemistry between Logan and Beth by depicting Logan as a positive influence on Beth’s family. The one obstacle to the romance is Beth’s ex-husband, Keith (Jay R. Ferguson) who is the overly stereotypical “ex” that is a problem in Beth’s life and also a power hungry police officer. Keith uses his influence as a cop multiple times to hurt the Beth’s relationship with Logan by abusing his power to harass Logan and having other cops essentially follow them. This plot takes elements from every other Nicholas Sparks related film and it could probably be pieced together by combining stories from each of those films.

The rushed plot severely hurts character development and highlights the scenes where bad acting occurs. Because the audience cannot connect with the film, emotional moments are abrupt and seemed forced. I heard chuckles in the theater when strong emotional scenes came about and I’m not sure if it was the bad acting, lack of character development, or a combination of both. There is one particular scene where Beth has an emotional breakdown and I myself laughed at how HORRIBLE Taylor Schilling performed the scene. Every character in this film was very stereotypical of romantic films over the years. Beth is a single mother who is still burdened by a relationship of her past and chooses to deal with that past relationship for the welfare of her son. Logan is designed to be the perfect man to fit any woman’s needs and it is obvious. Logan is mysterious, chivalrous, athletic, a war hero, hard working, able to repair most anything, and is great with kids and the elderly. Having all of these attributes, it makes it difficult for almost any woman to not find him appealing which was what was intended for his character’s role in the film.

The one and only one good thing about this film was the setting. The background was visually pleasing highlighting the woodland area filled with rivers, streams, and barren greenery. You could almost visualize the silence of the desolate area and the colors of nature were highlighted very well. The country feel of the area was accentuated with older plantation type homes, classic churches, and small town markets. If the other parts of the film could have come together properly, this setting would have been the perfect backdrop for a romantic film.

Overall I say this film was a complete wash. By any genre’s standards this film would seem rushed and it hurts every aspect of the film. The characters were boring and I found it difficult to connect with any of them. I found the story to be unbelievable which also pushed me away from the film and also made parts humorous to me. It is a given that males should avoid this film at all costs but I suggest that females also look elsewhere for a film that satisfies their romantic side. The majority of laughter I heard from the audience while viewing the film was female, and the laughter came at serious moments in the film.

In order to show that I am not a chauvinist pig who hates any type of romantic film, I have included my girlfriend’s take on the film as well. Here are her thoughts.

I thought the movie was just like every other Nicholas Sparks movie. The acting was terrible and bothered me that I didn’t see Zac Effron’s character smile once. Even though he didn’t smile, Zac Effron was still the best thing about the film because he was VERY easy to watch. I thought that the beginning was rushed in order to get to the love story which made the entire film seem like it was rushed through production. On top of everything the acting was terrible. Zac Effron was okay because I think the character role was what hurt him but Taylor Schilling was horrible. I would not see this film again.
-Emily

If it’s the only movie you can see, watch paint dry instead…