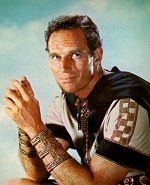 One of the absolute greatest of all time has passed away. Legendary actor Charlton Heston has died at the age of of 84. The CNN report states:

“Heston, known for portrayals of historical figures including Moses and Ben Hur, was suffering the late stages of Alzheimer’s Disease. Heston’s wife of 64 years, Lydia, was by his side at the time of his death, according to the family statement.”

Agree or disagree with the man’s politics or role with the NRA, as a movie fan you are obligated to bend a knee to the influence and career this man has had on film and its history. His performances in two of the greatest movies of all time, The Ten Commandments and Ben Hur were a couple of the most landmark in film history.

One of my favorite memories of Heston will always be the small role he played in “True Lies” as Arnold’s patch eyed boss. No one in history has ever said the words “We really screwed the pooch on that one” so perfectly.

What else is there to say? One of the titans has fallen, and he will be missed. If you’ll excuse me I’m going to run to Blockbuster and pick up Ben Hur.