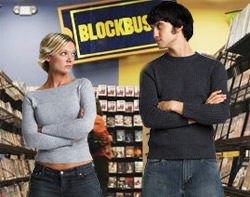 We’ve all been in this situation, and we’ve all seen thousands of others in the same predicament. It’s a Thursday night, you and your girlfriend decide to run to Blockbuster or something like that to grab a DVD you don’t currently have at home already because you’re in the mood for something else. Not sure what else… just something else. You get to the video store, naively thinking it’ll just take you a couple of minutes to grab something, and before you know it you’ve been there over a half hour and you’re no closer to picking out something you both want to see than you were when you first walked in.

Just last night I went to a video store to grab a copy of Ben Hur (just after hearing about the passing of Charlton Heston). When I walked in, I saw a couple looking on the new releases wall and making their way down (I noticed them because she was HOT). Anyway, I picked up my movie, then just looked a round a little bit and left. I was there for about 15 minutes. When I left, the couple was still there. When I left, I hit a KFC across the street on Sunset Blvd because I was a little hungry and have been wanting to try those new toasted snackers they have. I was in there for about 20 minutes. When I was ready to leave I remembered another DVD I wanted to check out, so I walked back across the street to Blockbuster again… and guess what…. the couple was STILL in there, now walking in front of the same wall again (probably for about the 3rd time). It took me about 10 minutes to find the DVD I was looking for, stood in line for about another 5, and by the time I got out of there, the couple was STILL LOOKING. By the time I left I figure that couple must have already been in there for about an hour.

We’ve all been there. Men and women have different tastes in movies, and so picking one up can been a bit of an exercise when you go together. There are a few bad methods couples try to use thinking it will make things easier. Some of these bad methods are:

BAD METHODS OF PICKING A DVD WITH YOUR GIRLFRIEND

1) Take Turns Picking
This is a HORRIBLE idea. The reason it’s a horrible idea is you almost guarantee you’ll never get a movie you’ll both enjoy watching. If it’s his turn, he’ll pick Transformers (if he’s any sort of a real man that is), and chances are, she won’t be that into it (unless you’re one of The Movie Blog Uncut girls that is). When it’s her turn, she picks up Sense and Sensibility which you probably won’t get much out of (unless you imagine Kate Winslet transforming into giant robotic Tyrannosaurus Rex and kicking the crap out of Hugh Grant). Yes it can work sometimes, but chances are she’ll hate the one you pick on your own, you’ll hate the one she picks on her own, and eventually a good DVD night doesn’t sound like much fun for either of you.

2) Pick One Together
Another horrible idea unless you think spending your whole evening at the DVD store doing repeated laps around the place trying to pick one out sounds like a great night to you. Then again, if you’re in one of those relationships where you’ve never had a fight yet and you wonder how the two of you will handle it once it comes along…. then this method just might be for you!

Yes friends, these methods have lead to a lot of wasted hours and unhappy couples. HOWEVER, a few years ago I started using a method that has almost always worked and left both people happy. I’m sure I’m not the first person to come up with it, but I thought I’d share it with you here. I call it the 5-1 Method

HOW AND WHY THE 5-1 METHOD WORKS

Ok, here’s how the 5-1 method works, it’s really quite simple. Once you get to the DVD store, 1 person (on their own) picks out 5 DVDs they’d like to see. When picking out the DVDs it’s important to pick movies that you’d like to see, but that you don’t think the other person would HATE (notice I didn’t say pick movies you think the other person will LIKE, but ones you don’t instantly think they’ll HATE). This process goes pretty fast since picking out 5 you’d like to see is ironically FASTER than trying to pick out just one. Once the 5 are picked out, the second person picks 1 movie from the five picked by the other person. It’s just that simple.

Here are some tips for making the 5-1 Method work even better:

a) Scan the DVD store’s website to see what’s new in advance. This will make the trip to the store itself even faster so more time can be spent at home watching the movie (and hopefully time for breast access following the movie)

b) Take turns between who picks the 5 and who makes the final choice. In the 5-1 Method, the person who picks the initial 5 has the advantage because they are guaranteed to get a movie they’re interested in. Switch it up UNLESS you try it once one way and both parties like it like that.

So there you have it. Follow the 5-1 Method and the steps I laid out, and I guarantee you you’ll be in and out of the DVD store much faster, almost ensure that you’ll end up with a movie that you’re both interested in seeing and greatly increase your chances for breast access (which is what it’s really all about anyway). :P