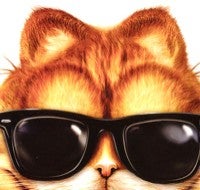 When I was a kid in grade 6, Garfield was THE funniest thing in the paper. I loved it. I even loved the short lived cartoon series when it came out. Although you don’t really hear much about the character anymore, I’m really stoked about the idea of a live action film. Apparently the amazing Bill Murray has signed on to do the voice of Garfield which is probably the best move they could have made. I mean come on! Who doesn’t want to see Garfield with Bill Murray doing his voice?!?! I also like the supporting cast they have lined up. Breckin Meyer (who was in the hilarious Rat Race) is playing Garfield’s owner Jon Arbuckle, while Jennifer Love Hewitt plays Jon’s love interest and Garfield’s vet Liz. I’m excited about it. Oh, and by the way, Odie IS in it too! The film is already in production and has a set May 14th 2004 as it’s release date. I’m such a looser. (Thanks to the good forlks at FilmForce.Net for the picture)

One thought on “Yes it’s true, Garfield the”