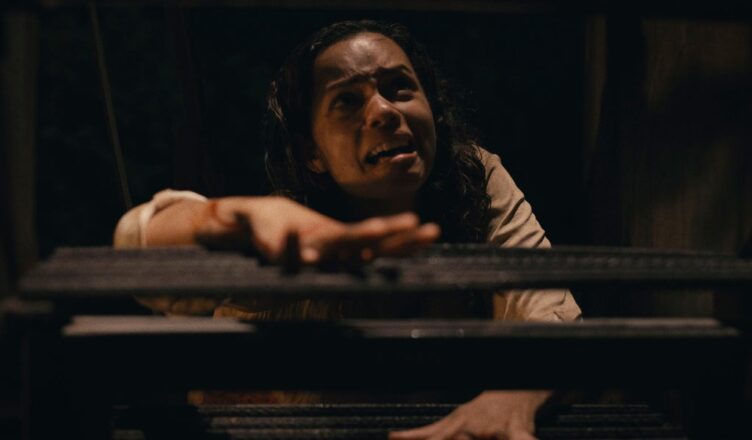 Barbarian starts off with one of my worst nightmares….an overbooked issue with an Airbnb rental! Imagine getting to your sweet cozy home away from home only to find out that some mediocre looking dude Keith (Bill Skarsgård) is already staying there! That is what Tess (Georgina Campbell) had to encounter. After a long drive to her rental in a run-down area of Detroit while on her stay for a big gig interview in this new city. And then imagine that you end up staying with a homie-the clown ( Skarsgard previously played Pennywise in IT)

Anyway, imagine staying because you basically have no other choice! I honestly clung to the popcorn bag immediately, and every move that Keith made was mad suspect.  Turns out Tess found that homie was actually an ok dude and here we are a sweet little rom-com in the middle of the suspense. Meanwhile, the next morning, while Tess is on her way to her interview, we see the trashy abandoned hood that Tess is staying in. I mean, I’m sorry but homegirl, did you not read the reviews for this spot? I digress.

Tess seems to do well on her interview and comes back to find that Keith is not yet back from his day. As she gets herself comfortable, she discovers that there’s no god damn toilet paper so she searches the home for it…. here it comes, entering the dreaded basement!! I mean, this is where the movie continues its worst nightmare fear!! I mean I don’t even like to go to the basement in my own family home with mysterious doors and whatnot – ARE YOU SERIOUS, GIRL!!! I will drive to the pharmacy for TP for my PP before I go downstairs to the damn BASEMENT!!!  Even Keith ( Bill Skarsgard) couldn’t believe that shit!

Lo and behold there were half-dead people living in the basement. And so the fun begins in this movie!  If anyone owns a home and is reading this, ya’ll better check your crawl spaces and mystery doors – get an inspector to do the deed and if they don’t come back or they mention a swamp-looking lady who wants to breastfeed them in cages – BELIEVE THEM and MOVE – better yet run! Just as we are getting introduced to the creatures down under, we cut off to what seems like another movie. At this point, I was confused and wondering if it was a short film series – what was happening…!!! This is where we get introduced to the adorbs Justin Long, who plays the slimy AJ, a film producer who turns out to be the epitome of masculine toxicity and is on his way to being canceled. He is the owner of the Airbnb and goes to the house to try to liquidate his investment. Justin Long brings out an interesting twist to the movie with a Laugh Out Loud moments.

I can not leave you without noting that the amazing acting and prescience that Georgina Campbell portrays in her character, Tess is really enjoyable to watch. Overall the acting in this film is fun and seamless. You’ll enjoy yelling at these characters while inhaling your buttery popcorn as I had.

OK, look, Barbarian has absurdly hilarious moments and I could not stop laughing at some scenes. Writer/Director Zach Cregger is also a comedian and I thought he brilliantly pieced this movie together in a light and fun horror-esque way. Go see it in a crowded theater and I promise there will be laughs, gasps, and screaming at the big screen. What more can you ask of in a horror movie?

Honestly, Barbarian is best watched without knowing too much about the plot, and with that said, thanks for reading, also watch this trailer! Don’t say I didn’t warn ya!