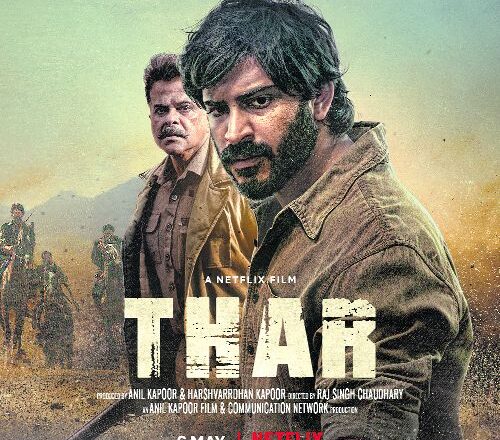 Veteran actor turned producer Anil Kapoor streams a neo-western revenge-crime thriller over Netflix titled “Thar”. Set in the Great Indian Desert which is also known as the “Thar Desert”, the film has been written and directed by Raj Singh Chaudhary, and features Anil Kapoor and his son Harshvardhan Kapoor in the lead roles.

During 1985, in the vast and rocky sand-laden desert of Thar, horror unfolds in an India-Pakistan border town named Munabao in Rajasthan, India. The small desert town witnessed the arrival of a shady stranger named Siddharth Kumar (Harshvardhan Kapoor) who presented himself as an antique dealer to the locals. His arrival coincided with the occurrence of a couple of heinous murders in the town that may or may not be connected with him.

This made Siddharth a point of interest for the local police. Inspector Surekha Singh (Anil Kapoor), an aging local cop, grabbed hold of this opportunity to prove himself as a competent police officer in the eyes of his department. Surekha Singh’s uneventful existence during his career as a cop was brought back to life as he set out to explore horrifying torture and murder mystery within the sleepy desert town. As he investigated the gruesome and violent murders, he crossed paths with Siddharth which prompted him on a mission to uncover the mystery of this suspicious stranger’s tragic past.

Anil Kapoor Strikes The Screens With His Son Harshvardhan Once Again!

The father and son duo has made a revolutionary come back to the big screens. Thar was a much-anticipated movie and was all over Bollywood reports for quite some time. The first movie of Anil Kapoor with his son Harshvardhan was AK Vs AK (2020) which I had reviewed some time back. In AK Vs AK, Harshvardhan had a short role but now in Thar, he is the lead protagonist alongside his father. I must say, this star kid is all set to strike it big in Bollywood in the near future. 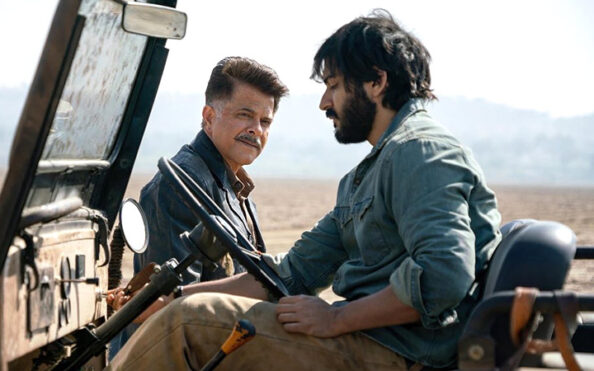 A Story Which Is Cruel And Compelling At The Same Time

The story of Thar involves some thrilling as well as horrifying elements which will grab your attention, and keep you engrossed. A small shady border town plagued with a series of heinous murders, a mysterious stranger named Siddharth Kumar who arrives in that town all of a sudden, bloody and decaying dead bodies of the torture and murder victims, and the police investigation conducted by Surekha Singh and his team in an effort to uncover the murder mystery; all of these elements within the storyline of Thar are sure to instill thrill to the brim and keep you engrossed till the end of the movie.

The Setting Amplified By A Visually Arresting Cinematography

The setting of Thar is what stole the show! The vast, sandy, and rocky desert landscape stretched as far as the eye can see, and the bare trees providing meager shades provoked the essence of an implacable and harsh beauty. I must tell you that the starkly beautiful landscapes and the gripping atmospherics in Thar were coupled with a haunting soundscape as frequent storms are evident in the region. These fascinating sights and frightening sounds of the desert coupled together will indeed create a hair-raising viewing experience.

The retro cinematography of Thar, set in the 1980s western desert landscapes of India, by Shreya Dev Dube was very appealing. Her camerawork added texture and substance to this crime-thriller by gliding over the vast expanse of the parched desert land. The camerawork precisely captured all details of a retro Indian desert town environment such as the blazing lights of the desert, old houses with overlooking balconies, and armed men on galloping horses. Some of these breathtaking sequences looked amazingly real to me. I must confess that I am very much pleased after seeing the cinematographic masterwork in Thar as the scenes in this movie remind me of the 1975 blockbuster action-adventure film Sholay whose sets and locations were one of a kind.

The dialogues in Thar written by Anurag Kashyap do stand out. Anurag Kashyap is one of the best filmmakers in Bollywood and one can expect him to conjure emotions through his clever lines. The dialogues in the movie are hard-hitting and upon hearing them, I do feel that they challenge the socio-political status quo and cast discrimination prevalent in the Indian society. I hail Anurag Kashyap’s dedication and courage in raising social awareness through such dialogues in this movie.

Raj Singh Chaudhary with his direction has successfully set a shady and gloomy mystery mood throughout the narrative of Thar. However, along with the gloomy narrative, he has given a gloomy, hollow and vacant look to Harshvardhan Kapoor’s character Siddharth as well.

Harshvardhan as Siddharth has been portrayed as a mysterious and shady young man whose lifeless and blank expressions throughout the movie are enough to get on your nerves every minute! Moreover, he has been shown using the nastiest possible torturing techniques on a local gangster named Panna (Jitendtra Joshi) in one scene.

However, I feel that rather than this torture which he practiced on his victim in the movie, he has kept the worst in his bag for the audience who are sure to get annoyed and frustrated after watching his lifeless expressions throughout the movie’s run duration. But what could the poor dude do? Chaudhary’s script itself might have demanded his character to be like that! 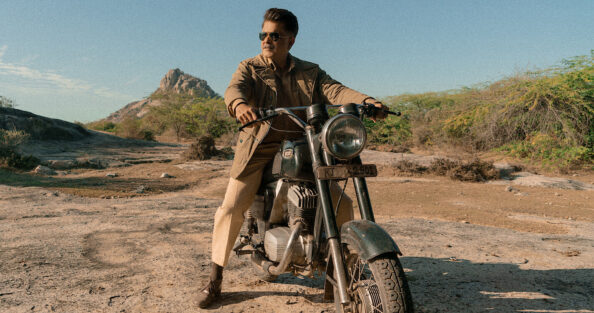 Harshvardhan Kapoor is the lead protagonist in Thar. However, his father Anil Kapoor as inspector Surekha Singh outshone him in terms of screen presence. Anil Kapoor’s aging police officer character has been shown to have a love-hate relationship with his life and his authoritative performance throughout the movie is commendable. In Thar, inspector Surekha has been shown struggling to find value and meaning in his years of service as a police officer. In spite of this, he uncovers the murder mystery with ease. Anil Kapoor is indeed a charismatic actor. In terms of dialogue delivery in an extremely tough local dialect along with maintaining a particular body language throughout the film; he simply nailed it!

The crime-based screenplay of Thar can shock you at first with two or three violent crime scenes. But as the story proceeds, the violent scenes get repetitive which makes the narrative lose its sheen. The screenplay involves some action sequences too, where in one scene you can see a Land Rover flying through the air which is very common in Bollywood movies. 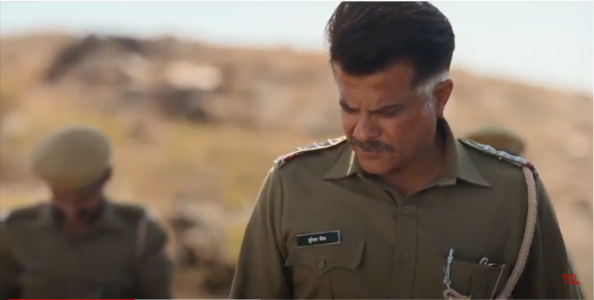 The screenplay is engrossing as the investigation proceeds, and inspector Surekha along with his comical deputy officer Bhure (Satish Kaushik) proceeds to uncover the murderer. However, the overall show lacks twists and turns which invokes predictability. This in turn may leave the audience unsatisfied and wanting more thrills.

I personally believe that there could be nothing worse than a movie that decides to join all the dots in its final moments. That’s what Thar did! This last-minute joining up of all the aspects brought an essence of laziness in the storytelling which direly opposed the movie’s carefully constructed narrative.

Besides in this heavily male-dominated script of Thar, all the female characters were half-baked including Fatima Sana Shaikh’s character of Siddharth’s love interest, Chetna. I feel Fatima Sana Shaikh has the potential to perform better in more prominent roles and she really deserves much better than this.

May Not Be Suitable For Certain Audiences

The assault and rape scene was drastic which is shown towards the ending of the film when the murder mystery began to unfold. A gang of drug-addled robbers has been shown entering the woman’s house and she unknowingly interrupted them during the robbery. Following this, the men overpowered her and brutally assaulted and raped her. The camera was focused entirely on her which portrayed the height of her suffering and amplified the humiliation she endured during the assault. I must admit that the violence and brutality shown in Thar were too much and this makes the movie unsuitable for everyone to view.

The brutal gang rape and murder of this woman was led by a local gangster named Panna (Jitendra Joshi). The story goes on the reveal that the woman was actually Siddharth’s wife. To avenge her death, Siddharth got romantically involved with Panna’s wife Chetna (Fatima Sana Shaikh) so as to make matters worse for Panna. He captured and tortured Panna and later on, killed and burned him in front of Chetna to avenge his wife’s death. As Panna faced his nightmarish death at the hands of Siddharth, it was also revealed that his wife Chetna was six-month pregnant with Siddharth’s child! A true act of vengeance indeed!

Upon watching Thar, I can feel that Bollywood has started developing international standards in many of its filmmaking aspects. This punchy and nihilistic western-style revenge-crime thriller has hints of Sergio Leone’s filming style and Cormac McCarthy’s borderland paranoia! The best thing about this movie is that it is not bundled with unnecessary song and dance sequences which most Bollywood movies are. This gives Thar a fairly compact screen time of a little more than 2 hours. The credit also goes to Aarti Bajaj’s precise editing skills which kept the flow of the film along with making it compact and less monotonous.

However, the ending of Thar is fairly misleading. Siddharth was shown being shot in his belly by Chetna just as he was about to surrender himself to inspector Surekha. Siddharth was the man behind the gruesome murders and he did them for a reason. The woman who was brutally raped and murdered was his wife and he had come to the small desert town to avenge her murder and punish the murderers. However, Chetna shot Siddharth as he had betrayed her into loving him and had killed and burned down her rapist husband in front of her eyes along with impregnating her with his child. But the ending doesn’t really show Siddharth dying and chances remain that he could be alive for a sequel! The fact is that he was only shot once in the belly and as you know being shot in the belly doesn’t result in immediate death. In fact, he might have become unconscious.

The movie Thar is all about desert, dacoits, menacing darkness, and brutal violence. Apart from Anil Kapoor’s character of inspector Surekha, most of the prominent male characters in Thar including Siddharth have a typical “bad guy” existence. To conclude, I must warn you that if you cannot stand graphic violence and assault, this movie is not for you! 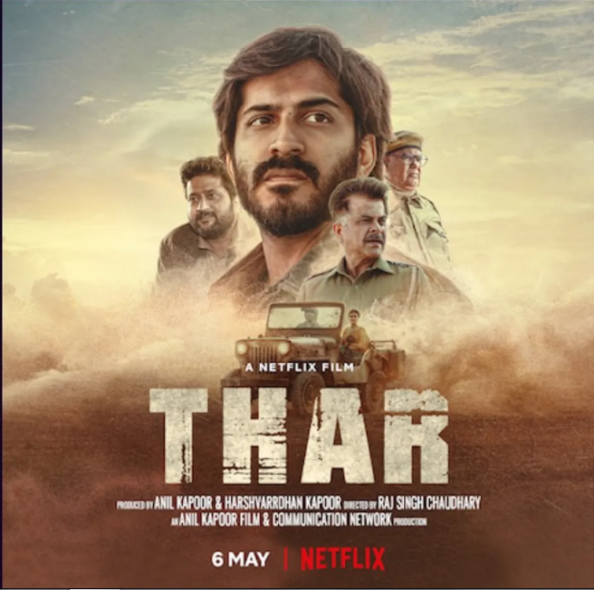