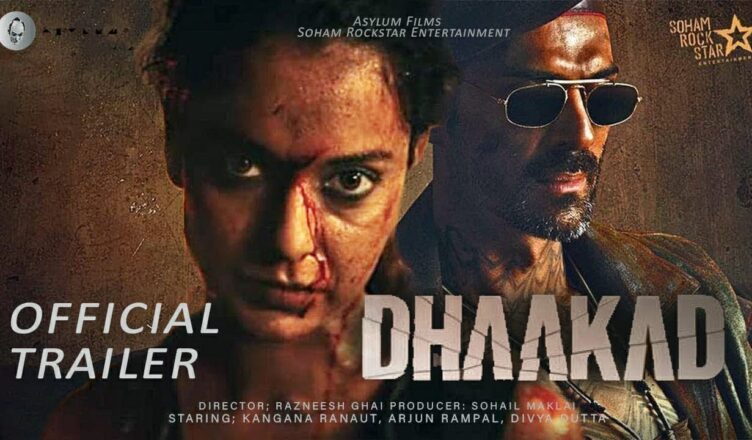 An intense action-thriller titled “Dhaakad”, translated as “Formidable”, has hit the big screens in Bollywood on May 20, 2022. Writer and director Razneesh Ghai brings the story of a daredevil International Task Force (ITF) agent named Agni in Dhaakad, who sets on a mission to take on a ruthless mafia leader named Rudraveer. Starring Kangana Ranaut as Agent Agni, and Arjun Rampal as Rudraveer, Dhaakad runs across theaters all over India.

ITF Agent Agni (Kangana Ranaut) is an orphan whose parents were murdered by an unknown assassin when she was a child. Agni is sent to Budapest, Hungary to gather information about an arms and human trafficking racket. Upon collecting all details on the racket in Budapest, Agni learns that the masterminds behind the racket are a coal mine business owner Rudraveer (Arjun Rampal), and his partner Rohini (Divya Dutta).

Rudraveer is a mysterious mafia boss who operates from the Sohagpur Coal Fields near Bhopal in India. As Agni gets ready track him down, little did she realize that she has put herself in the toughest, and the most dangerous mission in her career.

If you happen to be the action genre buff, Dhaakad is a must watch movie for you! From beginning till the climax, this movie is filled with intense raw action, and violence. Dhaakad’s action-based screenplay is loaded with high intensity gun action, hand-to-hand combats, and mass killings. This movie is a perfect combination of action, adventure, and thrill where we get to see Kangana Ranaut as Agent Agni on a mission to take down mafia leader Rudraveer.

During an interview, debutant director Razneesh Ghai revealed that he along with the other filmmakers had brought some of the best action choreographers from the U.S. and South Korea for directing the action sequences in this movie. It was also revealed that the actors including Kangana Ranaut had to undergo high-intensity martial arts and stunt training for about three months in order to prepare for their action-oriented roles. No doubt, that’s the reason the action scenes in Dhaakad are so intriguing.

Kangana Ranaut has rocked the show in Dhaakad with Angelina Jolie’s Lara Croft look. Her costumes and body language in the movie are one of a kind and it is the first time ever that an actress from Bollywood has sported a Hollywood-style appearance. Kangana has suited the look very well, and after watching her in Dhaakad, I did feel that Bollywood has finally come out with its own Lara Croft!

Kangana’s fierce, feisty, and fearless action avatar in Dhaakad stands out as this is probably one of those few films in Bollywood that portrays a female action lead. Bollywood happens to be a male-dominated industry where there are many action heroes but barely any action heroines, or to be more precise, absolutely none. So, to make up for this deficit of female action leads in the industry, Kangana blasted the screens with high-tech weapons, and intense fist fights.

Quite An Appreciable Work By Debutant Director Razneesh Ghai 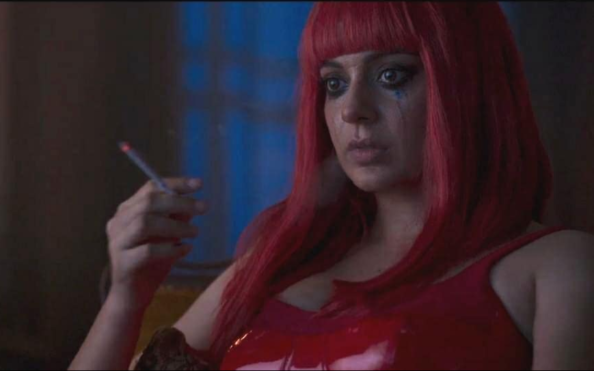 Razneesh Ghai has made his debut as a director in Bollywood with Dhaakad. Through Dhaakad, Ghai has shown his capability of making intense action movies in the coming future. I have a feeling that his direction is going to improve further as he gets more and more accustomed to the industry.

Further, I felt the scenes in Dhaakad have been aptly placed by editor Rameshwar S. Bhagat to match the flow of its storyline. The film has a considerable runtime of 2 hours and 15 minutes, and I believe Bhagat has done his best to keep the sequences as precise as possible.

A Story Which Gets Too Predictable

The story of Dhaakad has been co-written by Ghai, Chintan Gandhi, and Rinish Ravindra. Even if this is a great action movie, its plot is too predictable which tends to diminish the thrill and excitement as it proceeds. I mean, you might have already come across such plots in the action movies you have watched in the past where the hero sets on a mission to find the villain, and destroy him. So what’s new to this?! When you are already aware that at the end of it Agent Agni will destroy Rudraveer; then does there remain any space for the thrilling element? As a matter of fact, I feel that such a predictable plot doesn’t suit well for a movie which runs for 2 hours and 15 minutes. 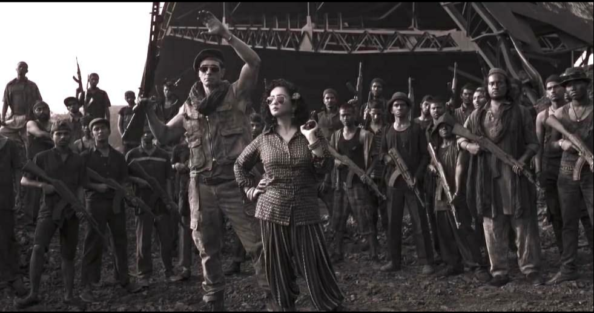 Another shortcoming to the action screenplay in Dhaakad is the dialogues written by Ritesh Shah. Dhaakad is filled with very ordinary and average dialogues, and I even felt that some of the dialogues have been written mindlessly. 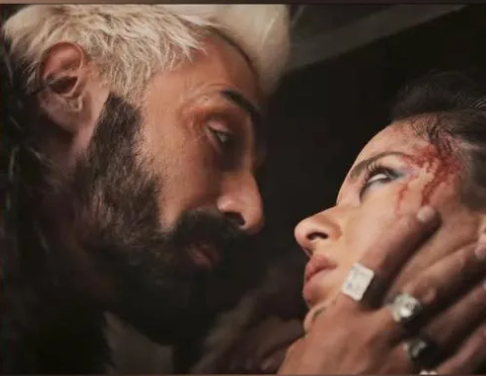 For instance, there goes a scene where Agent Agni’s boss (Saswata Chatterjee) narrates Agni her past, and tells her, “That’s why I hid these matters from you”. To this Agni replies, “Then why did you hide these from me?” You can very well see how mindless this dialogue appears. When Agni’s boss already told her the reason as to why he hid the matters relating to her past from her, she again asks him why he did so! I think this is not only mindless but hilarious as well. 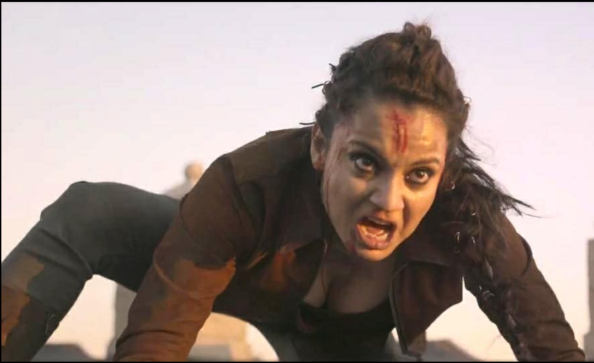 The character of Rudraveer played by Arjun Rampal in Dhaakad indeed appears confusing. It might be that due to the lack of a proper script in this movie, the Rudraveer character was not amplified very much by the filmmakers as most of the focus was set on Kangana’s Agent Agni character only.

The cinematography by Tetsuo Nagata in Dhaakad was not appealing. In fact, most of the action sequences in the movie were shot in dark environments with very low lighting because of which at times it got strenuous for the eyes to make out who was fighting whom. 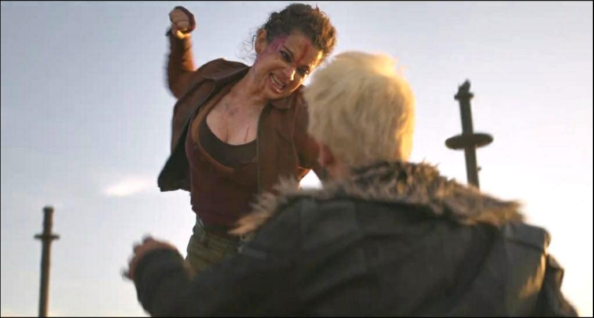 The filmmakers might have thought that shooting action scenes in dark environments with very little visibility will make the sequences thrilling and exciting for the audiences. But the case is not so. They need to understand that the audience is not watching the movie to put strain on their eyes and make out things by themselves. They are watching it just for the sake of entertainment. If scenes are shot in clear visibility, they become much more appealing to the audience.

The locations in Dhaakad were not great. The film was shot at the Betul municipality in Madhya Pradesh, India and also at various locations across Budapest, Hungary. As Rudraveer was a coal mine owner, most of the sets in the movie depicted coal mines of Madhya Pradesh. However, the sets and the backgrounds in Dhaakad didn’t have any special enticing element, and they appeared very average to me. 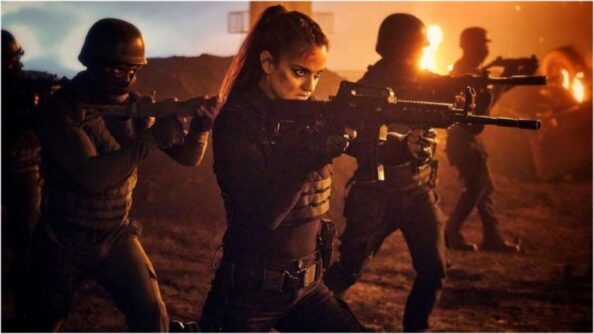 Divya Dutta carried out her role as Rudraveer’s partner-in-crime Rohini satisfactorily. However, just like the mysterious Rudraveer, her character also didn’t get too much exposure through this movie. Also, I wouldn’t like to comment about the songs in Dhaakad as they are not worth it. Some of the songs have intensified action-oriented themes which make them too loud and unpleasant. However, the rap track “She’s On Fire” by Badshah and Nikitha Gandhi may appeal the audiences to some extent. The track features Kangana, Arjun Rampal as well as rapper Badshah.

Dhaakad is a one-time watch average action-thriller. There are movies which you feel excited to watch over and over again! But Dhaakad is not one of those. However, I feel Dhaakad is a nice try on behalf of Bollywood to keep the audiences entertained with action, adventure, and some twisted thrills. The twist in the plot comes when Agent Agni learns from her boss about her parents’ murderer. If you are an action lover, you will surely enjoy watching this movie once. But owing to the limitations in its script, and a predictable storyline, Dhaakad fails to achieve a mass appeal among audiences who are expecting loads of thrills in whatever movies they watch.

You will be amazed with the hell lot of Bollywood movies pouring in these days. Due to the COVID-19 pandemic, several Bollywood films had postponed their release date, and are now releasing all at a time! Dhaakad, and Bhool Bhulaiyaa 2 released on the same day; that is May 20, 2022. However, as Bhool Bhulaiyaa 2 gained mass appeal, Dhaakad did not do so well where several of its shows got cancelled as more and more from the audiences chose to watch Bhool Bhulaiyaa 2 instead. 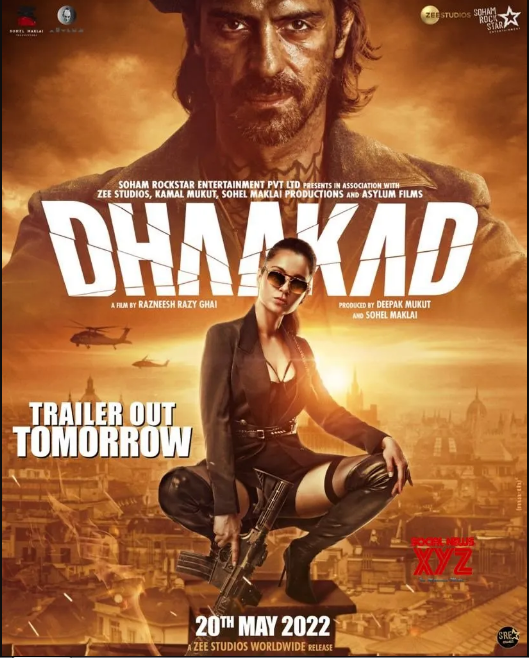