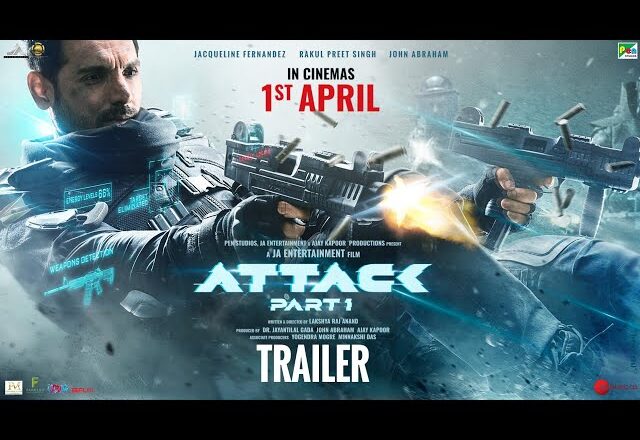 Get ready for an “Attack” as India’s first super-soldier rises to defend his country! A sci-fi action-thriller titled “Attack” has just hit the big screens in Bollywood. Director Lakshya Raj Anand films the story of a daredevil soldier, who after undergoing paralysis, got transformed into a superhuman as a result of a scientific experiment. The story of Attack has been developed by John Abraham and the screenplay has been co-written by Anand, Vishal Kapoor, and Sumit Batheja. Starring John Abraham as India’s first super-soldier Arjun Shergill, the first part of the Attack film series was released on April 1, 2022, and currently runs across theaters all over India. Get ready for an adrenaline rush after you watch John as Arjun put his superpowers into action to save India from an unexpected terrorist attack!

Indian soldier Arjun Shergill ended up with permanent full-body paralysis while he was countering a terrorist attack in Kashmir, India. Arjun’s life had stopped and he had to retire from his duty. In the meantime, a scientist named Dr. Saba Qureshi (Rakul Preet Singh) was engaged in performing a futuristic scientific experiment that would enable a paralyzed person to stand up and walk again. Not only walking, but that person undergoing the trail will gain superhuman abilities! And who do you think would become the guinea pig for this experiment? You thought right. It’s none other than Arjun!

But Hamid’s plan was more sinister. He was planning to conduct a chemical bomb explosion! Will Arjun, the super-soldier, be able to save India from this disastrous event? To know more, check out Attack: Part 1 at your nearest theaters as the countdown begins!

Bollywood is evolving! Sci-fi action films are not very common in the industry. Bollywood has seen many action heroes but not a cyber soldier to date! “Attack: Part 1” happens to be the first time that the film industry has come out with a wild decision to make its hero superhuman.

Arjun Shergill became a super-soldier as a chip was installed behind his neck through surgery by Dr. Saba. With that chip, Arjun gained superhuman abilities and his paralyzed days were over! The chip also came along with an additional feature in the form of a female instructive assistant named “Ira”, which too got implanted within Arjun. Ira used to guide him with instructions and visual technologies that made his super-soldier character direly intriguing.

The Action You Asked For!

Attack: Part 1 is filled with intense action from the beginning till its end. John Abraham has blasted the screen in Attack: Part 1 with daredevil bike stunts, high-intensity fight scenes, and gun action sequences. His endeavor in saving the city from the chemical bomb blast was worth the watch. The screens blasted with monitored explosions and also with John’s dynamic presence.

John Abraham used to have a robust muscular physique and he still likes to live up to that. The best thing about this actor is that he is very much aware of his style and physicality. When you are watching his movies, you don’t get to see much acting. It’s his macho physique and action sequences involving shirtless fights which tend to impress the audiences.

However, as John is nearing 50, he is no longer as huge and impressive as he used to be. He has cut down a lot of body weight as well as muscle mass. Still, he looked a great fit in the character of the super-soldier. I believe such intense action-oriented characters in Bollywood films can only be performed by a handful of actors; one such actor is John Abraham!

The screenplay of Attack: Part 1 was fascinating. The action-oriented screenplay consisted of thrilling instances like the Parliamentary attack by the terrorists. The scene showed hundreds of politicians including the Prime Minister of India taken hostages by the terrorists who were planning to conduct a chemical bomb explosion in the city. Arjun barged into the Parliament building and destroyed the terrorists after indulging in mind-boggling combat sequences. For sure, I wouldn’t have enjoyed this action screenplay had not editor Aarif Sheikh aptly placed all the sequences in the film which in turn kept the thrill flowing.

The cinematography and amazing visual effects in Attack: Part 1 were the combined effort of cinematographers Will Humphris, P.S. Vinod, and Soumik Mukherjee. Surely, they did their best in capturing all combat sequences and action stunts precisely and electrifying the sequences with explosive CGI effects. 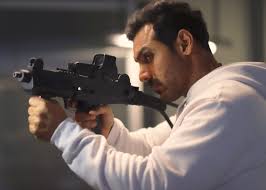 I praised John’s “action” but not his “acting”. To be precise, John Abraham was never a top-class actor. Whichever of his movies I have seen till date, I only found him giving blank dialogue deliveries and expressions. I feel that people watch him only because they get enchanted by his muscular physique and personality, not his acting.

If you happen to watch “Attack: Part 1”, you would probably agree with me. I mean, what dialogue delivery can there be in this movie? It’s all action top to bottom! That’s why I believe the filmmakers opted John as the “fighter cock” in this movie as they probably knew that acting and dialogue delivery isn’t his cup of tea! And my intuition tells me that John might have himself opted for this role as you see the story of Attack: Part 1 is entirely his brainchild.

Is The Character of Super Soldier Arjun Shergill Inspired By RoboCop? Maybe!

If you have watched Alex Murphy the RoboCop, this won’t be anything new to you. I feel that Arjun the super-soldier resembles the RoboCop character to a great extent; powerful, invincible, and equipped with the latest combat technologies. The only difference is that RoboCop was a human-turned-humanoid whereas in “Attack: Part 1” Arjun had gained superhuman abilities because of a chip inserted in his neck. He was not converted into a humanoid. However, I believe Bollywood still pursues the age-old habit of taking its ideas from Hollywood.

There are many unprivileged groups in Indian society who may not have access to Hollywood movies. So, they might not have any idea who Murphy the RoboCop is. That’s how they might presume this Arjun super soldier character to have been innovated by Bollywood. Bollywood does take advantage of this loophole in the Indian society and comes out with movies that resemble Hollywood films and the audiences after seeing those films, simply get astounded.

This is the first time that Bollywood has designed a man-made superhero in the form of Arjun the super-soldier. Maybe John Abraham had become bored by performing his usual Bollywood -style fight sequences and wanted to come out with a complex character that involved technological combat skills. Whatever may be the reason, John as Arjun surely rocked the show throughout!

Jacqueline Fernandez didn’t have much of a role in Attack: Part 1 as Arjun’s love interest. She was seen in a few shots and was cast opposite John in some romantic tracks. She carried out her short and significant role well. Rakul Preet Singh looked cool in her scientist character of Dr. Saba. Prakash Raj with his comical expressions has always fascinated me. So he did in Attack: Part 1 as well.

Lakshya Raj Anand was an assistant director in quite a few impressive action films in the past like “Ek Tha Tiger” starring Salman Khan and “Bang Bang” featuring Hrithik Roshan. As the director of Attack: Part 1, he has created a noticeable impact with John Abraham in the lead role.

Attack: Part 1 was supposed to release on August 2020. But due to the COVID situation, the release date kept on postponed till it finally was able to release on April 1, 2022.

Attack: Part 1 runs through a considerable duration of a little more than 2 hours. The thrill this movie will instill in you is sure to keep you glued throughout. If you do not want to miss out on this electrifying and thrilling geopolitical drama then catch hold of John Abraham in action at your nearest theaters! 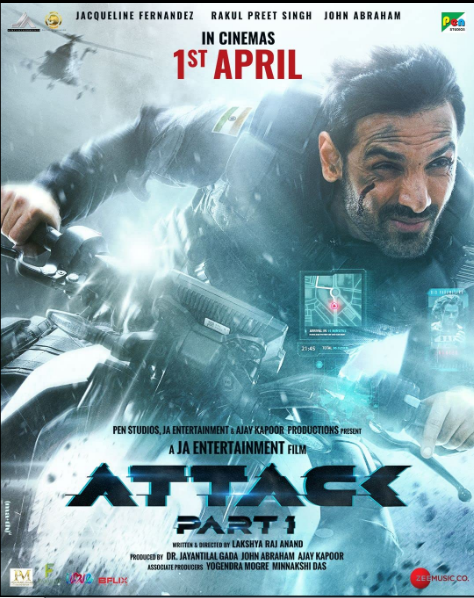