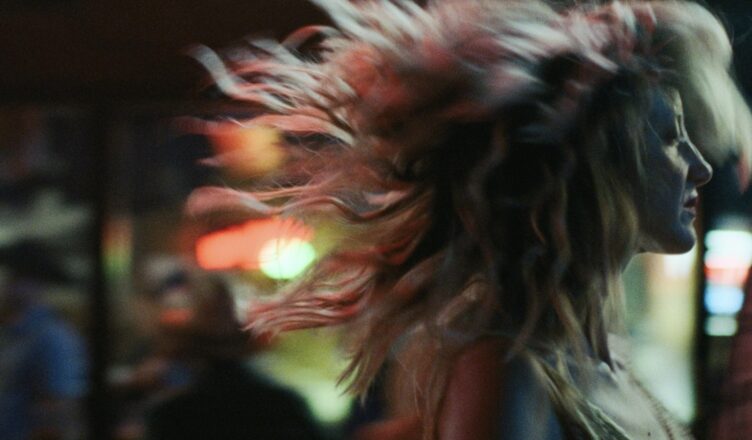 Synopsis: A West Texas single mother wins the lottery and drinks it away just as fast, leaving behind a world of heartbreak. Years later, with her charm running out and nowhere to go, she returns home to confront her past, her choices, and her future.

The common denominator for “To Leslie” and ‘the Cow” at SXSW is the presence of Owen Teague in the role of “young son.” Teague is far from the best-known name in the one-hour and 59-minute film “To Leslie,” which boasts one Oscar winner and other much better-known actors.  Michael Morris directed, and it’s worth mentioning that Morris was the executive producer of the 2016 series “Bloodlines,” in which Owen Teague appeared as Young Danny. 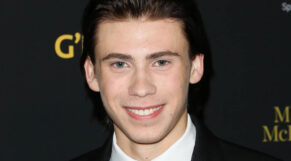 The film is based on the real-life story of a West Texas single mom who won the lottery and lost it all to her addiction to alcohol. Oscar-winner Allison Janney (“I, Tonya!”), Stephen Root (the stapler guy in “Office Space”), and Marc Maron (“G.L.O.W.”), who also executive produced, have leads. Royal is portrayed by Andre Royo (“The Wire”), also a fine character actor who is also a stage actor and writer.

The film stars Andrea Riseborough, a British actress who has been hailed by the Sunday “Times” as one of Britain’s rising young stars, along with such other luminaries as Hugh Dancy and Eddie Redmayne. She graduated from the London Academy of Royal Arts (RADA) in 2005, but her West Texas accent is completely convincing. The script is courtesy of screenwriter Ryan Binaco and the Cinematographer is Larkin Seiple.

The opening scenes of “To Leslie” show a jubilant young mother celebrating winning $190,000 in the lottery and declaring that drinks are on her. Six years later, she’s broke and the drinks have definitely been plentiful during those years (and mostly in her). It is many drinks past that celebratory day and Leslie is no longer the attractive woman she once was. Her flirting at the bar does not produce the kind of attention it once did.

We learn that the young mother of the opening scene abandoned her son (Owen Teague as James) and his step-mother (Allison Janney) was forced, along with Dutch (Stephen Root) to raise him, by default. To say that Allison Janney’s character is angry and resentful is probably an understatement.

The film is about Leslie hitting rock bottom and trying to claw her way back to at least the middle. She is extended a life-line in that bootstrap journey by Marc Maron’s character of Sweeney, the manager of a seedy motel on the edge of town. Sweeney is running it for Andre Royo’s character, Royal. Royal was left the motel by his family but he took too much acid in his younger days, which has left him with mental impairments that make Marc Maron’s participation in running the motel essential.

As Leslie gradually swears off the booze and gets sober, she and Marc Maron’s character and Royal assist her in renovating an ice cream parlor on the edge of town and the happy ending involves son James (Owen Teague), to whom Leslie turns when things are at their bleakest. James turns up at the end for a happy ending, and all’s well that ends well. The film is the female film equivalent of “Leaving Las Vegas.”

The acting was excellent, but the true story has been told many times previously. (Even “A Star Is Born” touches on the old familiar story of alcoholism.)

I did enjoy watching Andre Royo strip nearly naked and race around amongst the cactus and sand of a west Texas prairie, (as we are told in the script he is prone to do.) Marc Maron’s offer of a job cleaning motel rooms and washing the laundry makes you wonder if he has romantic designs on Leslie. That seems to be the case as the film winds down and hope the couple can make it as a dynamic duo.

The second film where Owen Teague has a major recurring role is “The Cow,” directed by Eli Horowitz. This is Eli Horowitz’s first feature film directing job, although he is the co-creator of “Homecoming,” both the podcast and the television series.   (I couldn’t help but wonder if Eli is related to its star, Winona Ryder, since Winona’s real last name is Horowitz). Co-writer for the screenplay is Matthew Derby.

Whether related or not, Winona Ryder is the star of this horror/sci-fi/thriller and she is great in her part.  Dermot Mulroney (“My Best Friend’s Wedding”), whom I met in Chicago when he appeared as Steve Huberbrecht in “August, Osage County” (2013), is the male lead. John Gallagher, Jr, who plays Kath’s (Winona Ryder’s) former student is recognizable to audiences from his role as Jim Harper in “The News Room” (2012-2014) and his role in “10 Cloverfield Lane” as Emmett (2016).

The tag line for the plot reads: “Upon arriving at a remote cabin in the redwoods, Kath (Winona Ryder) and her boyfriend (John Gallagher, Jr.) find a mysterious younger couple already there (Owen Teague and Briane Tju) — the rental has apparently been double-booked. With nowhere else to go, they decide to share the cabin with these strangers until the next morning. When her boyfriend disappears with the young woman, Kath becomes obsessed with finding an explanation for their sudden breakup— but the truth is far stranger than she could have imagined.”

Aging and the inevitability of all of us deteriorating and falling apart seems to be a big theme of this interesting and intriguing film. We all want to avoid falling into ill health or, for that matter, getting old at all.  Dermot Mulroney’s character of Nicholas Levi Barlow, who is the tenant of the cabin in the woods, has just witnessed his father fall ill and die from a rare degenerative inherited blood disease—or so he says.

As someone who sat through “Cow” at the Chicago International Film Festival let me just clear up any confusion that this film has anything at all to do with cows. It does not. While we followed the plight of a cow, from birth to death, in the film “Cow”, with no dialogue, here we have plenty of twists and turns and unexpected plot twists that may not be too scientifically proven to be true, but what-the-hell: it’s just a movie.

The best I can offer by way of explaining the title is a line from Greta (Briane Tju’s character), a reference to “Maxie, the blood cow.” If you have a burning desire to determine how that title fits into the plot, just as we pondered “The Power of the Dog” as a fitting title, then you’ll simply have to see the film, which, if you’re a sci-fi or horror buff, will be a better investment of your time then watching yet another derivative rehash. (I missed the World Premiere of “The Man Who Fell to Earth” here, which looked very promising, but I was reviewing when David Bowie so brilliantly filled the bill for that part back in 1976.)

The cinematography is by David Bolen and the music is from David Baldwin.

I liked the film. As a former acting voting member of HWA (Horror Writers’ Association), I was glad to see a more original approach. The only difficulty with the film involved the quick cuts back and forth in time, which the director expects the audience to stay on top of these transitions without much assistance.  The denouement also leaves a lot up to the audience without that “finished” feeling.