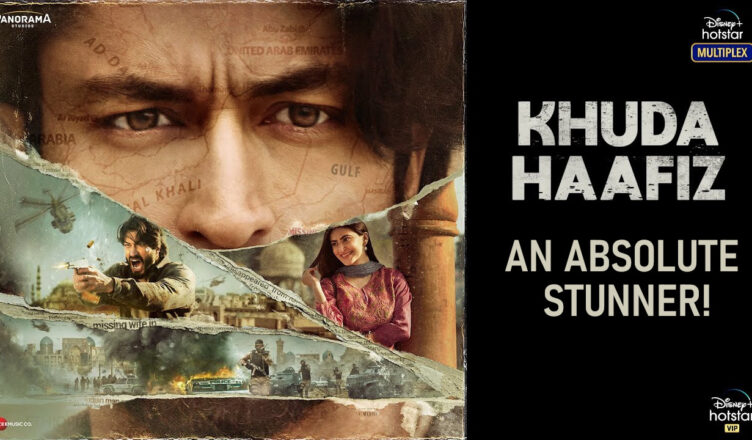 “Love knows no limits, no boundaries, no obstacles, no distance, no reason, and no circumstance”. When software engineer Sameer Chaudhary’s newly-wedded wife Nargis went missing under mysterious circumstances, when she went to the Middle East for a job, it was all left to Sameer to barge all barriers and go find her. Writer and director Faruk Kabir brings a thrilling action-filled adventure story titled Khuda Haafiz based on real-life events set during the Financial Crisis of 2007-2008. Featuring Bollywood’s professional stuntman and action hero, Vidyut Jammwal in the role of Sameer Chaudhary, Khuda Haafiz streams on Disney+ Hotstar.

You might wonder, what made me narrate such a long story for this review? But can you believe this?! According to Bollywood reports, this is a true story based on real-life incidents! There was a software engineer (name not disclosed) whose wife went missing while on a job lookout in a foreign country during the Financial Crisis of 2007-2008. The man loved his wife dearly and he went rampaging in that country in search of her.

Check Out The Truck Scene!

Faruk Kabir’s screenplay mentions the country as “Noman”. However, this Noman is a fictitious place and does not exist. Or does Kabir want to secretively indicate the Middle East country of “Oman” here? As per the map shown in Khuda Haafiz, the location of Noman is somewhat the same as Oman. However, the filming of Khuda Haafiz was never done in the Middle East. In fact, the majority of the filming was done in the Central Asian country of Uzbekistan.

I have doubt if all the incidents shown in this action thriller are real. There are no reports on what happened to the software engineer or his wife. Bollywood has the age-old habit of spicing up matters to the brim. So, I believe Khuda Haafiz might be an exaggerated version of what actually happened.

However, if you leave all logic aside and concentrate on the movie, you will find Khuda Haafiz to be an absolute master blaster! The action sequences in the movie were an absolute stunner! Starting from Vidyut Jammwal’s high-intensity fights where he goes on a killing spree to the high-speed vehicle chases and the intense gun action sequences; all turned this thrilling adventurous story set in a foreign land to a high-voltage action drama. However, I must warn you that the action sequences shown in Khuda Haafiz are extremely violent and gory and definitely not for the faint-hearted.

Khuda Haafiz does signify what the “common man” can do if enraged. I have come across reports saying “Khuda Haafiz” is a movie about a “damsel in distress” where a “braveheart hero” saves her. I swipe aside all these false reports because come on! That “damsel in distress” is his wife! I feel any man who loves his wife dearly and cares for her, just like Sameer, would have dared to do the same thing!

Vidyut Jammwal rocked the show throughout Khuda Haafiz. His software engineer-turned-action hero character of Sameer in the movie is highly intriguing. Throughout the movie, the desperation and distress were visible in Sameer’s eyes which showed that he was all set to go to any extent to find and save his wife Nargis.

However, Vidyut Jammwal is not a master actor as far as dialogue delivery and body language are concerned. But I must tell you that he is an ace martial artist, stuntman, and action choreographer in Bollywood. His actions speak the words for him!

The reason I tag Vidyut Jammwal as the “action star of Bollywood” is because he is famous for high intensity and powerful action-oriented roles which involve fistfights, gun action, and mind-boggling stunts. If you ever happen to come across any movie which will star Vidyut Jammwal, you will already have the hint that the movie is going to be action-packed only! Whichever of his movies I have seen so far, be it his Commando Series films or the 2011 Bollywood action thriller “Force” where he played the lead villain opposite John Abraham, all involved intense action sequences which are impactful enough to make you fall from your seats!

Annu Kapoor as the helpful and daring taxi driver Usman added an essence of hope to the distressed Sameer. Annu Kapoor has a record of immaculately carrying out character roles in Bollywood and he did so in this movie as well.

The female cast in Khuda Haafiz involved Shivaleeka Oberoi as Sameer’s wife Nargis and Aahana Kumra as Nomani police officer Tamena Hamid. Shivaleeka didn’t have much of a role to play in the movie, except getting married to Sameer in the beginning and leaving for Noman. She appeared in a few shots in between the movie and at the end. However, she carried out her short and significant role of Nargis quite well. Aahana Kumra as Tamena had a funny Arabic accent in her Hindi dialogues. I believe this was done purposely to make her look more “Arabic”. However, she did perform some action-packed scenes which included her final one-on-one fight to the death with Shiv Panditt as Malik.

The lead villains in Khuda Haafiz, Shiv Panditt as the corrupt cop Faiz Abu Malik and Nawab Shah as the human trafficker Iztak Regini gave tremendous performances. Shiv Panditt greatly suited the role of the stylish and corrupt police officer. Nawab Shah with his massive muscular physique is sure to intimidate you as the ferocious Iztak. Standing 6 feet 3 inches tall with a powerful build, this 51-year-old actor still lives up to his meaty roles!

I must credit Faruk Kabir for his classy direction in Khuda Haafiz. He rose to fame after directing this intense action thriller. Faruk told in an interview that he is very much inspired by real-life events and likes to weave stories around them. I believe, he really did so in Khuda Haafiz. The entire screenplay was written by him only and I must say, he did spice up this real-life story to the brim!

Khuda Haafiz is that kind of thriller that I believe thriller lovers usually crave for! The 2 hour and 15 minute screenplay involved thrilling instances at every moment starting from Nargis’ disappearance to Sameer’s endeavor to find her. The screenplay didn’t lose flow even for a single minute! There is absolutely no slowdown in the movie. Every scene has been placed sequentially and I must credit Sandeep Francis for this immaculate editing.

A Camerawork Worth The Appreciation

The filming of Khuda Haafiz mostly proceeded in the desert-laden landscapes of Uzbekistan. High-definition camerawork by Jitan Harmeet Singh successfully captured all action sequences in detail. What amazed me were the car chase scenes. The precision camerawork was amplified by the intense chase sequences which involved daredevil motorcycle stunts as well. Let me tell you, Khuda Haafiz involved the minimal use of VFX. It is all hardcore raw action performed by daredevil stuntmen!

Did All This Really Happen?!

When Bollywood says this “really happened”, I start getting doubts! For sure, there might have been a man like Sameer whose wife disappeared and he went in search for her. However, Bollywood has the habit of spicing up stories with irrelevant amusing incidents like a single man fighting with 50 goons altogether. The spicing-up in Bollywood filmmaking of real-life incidents continues to the extent that a real story gets converted to a fake one!

The songs in Khuda Haafiz are melodious, I agree. However, what may look melodious and beautiful to one person may not look as good to the other. I usually prefer songs that directly hit the heart. I feel nowadays Bollywood is composing songs just for the sake of it.

However, if you are of a different opinion, you can choose to listen to the tracks of Khuda Haafiz like the “Title Track”, “Jaan Ban Gaye”, “Mera Intezaar Karna” and “Aakhri Kadam Tak” and tell me how you feel about them.

If you are in for some hardcore thrilling action, do check out Khuda Haafiz. But I must tell you that Khuda Haafiz is not just a story of a husband saving his wife from flesh traders but has a deeper inner meaning as well.

Khuda Haafiz makes us aware of the prevalence of flesh trade in Middle Eastern countries. Though there is no place like “Noman”, however the map in Khuda Haafiz indicated an Arab country’s location. Because of the corruption prevalent in India, many innocent Indian women like Nargis fall prey to human trafficking agents like Nadeem and get transported to such countries where they are forced to live the life of prostitutes.

Nargis was forced into prostitution after being kidnapped. She was drugged, sexually abused by various brothel customers and tortured by the brothel people on a daily basis. It took quite some time for Sameer to locate and save her from the flesh traders. In the meantime, she had to undergo this torturous life every day while in the captivity of the brothel people.

The problem will unfold when Sameer returns with Nargis to India. The Indian society is a highly conservative one and a woman who has been sexually abused like Nargis over several days is looked down upon by society. Indian society finds it hard to accept such women.

In the Indian Hindu mythology of “Ramayana”, even Lord Rama tested his wife, Goddess Sita, by asking her to step on the fire to assess her “purity” after she was rescued from the demon king Ravana’s captivity. So, will Nargis have to bear the same plight of Goddess Sita after she returns to India? To know what will happen to the couple in this conservative Indian society after they return back, watch out for the sequel “Khuda Haafiz: Chapter 2 – Agni Pariksha”, which means “The Fire Test”, expected to release in theaters soon! 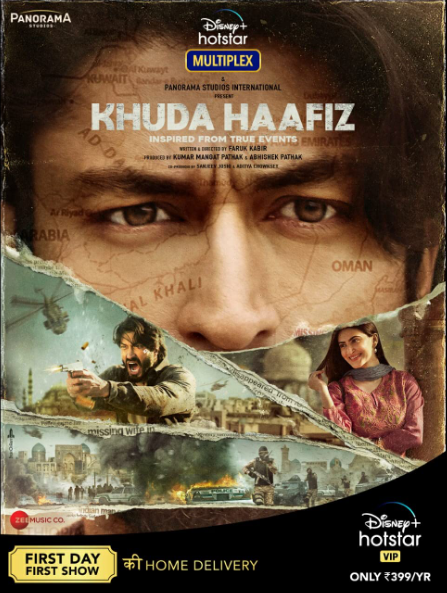