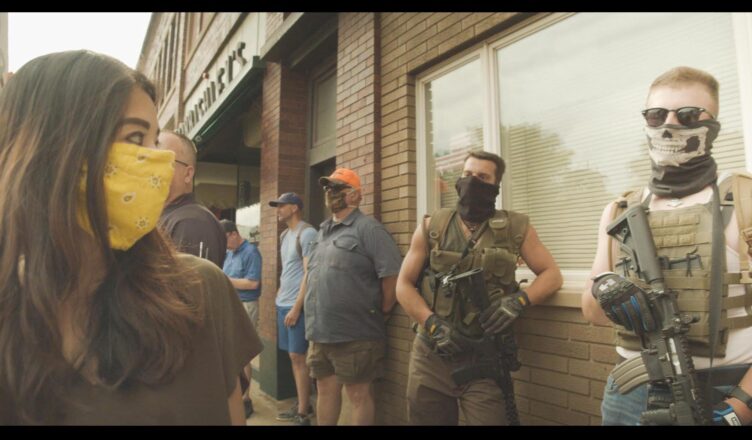 The documentary by David Siev entitled “Bad Axe,” which focuses on the Siev family of Bad Axe, Michigan, is a chronicle of the pandemic and its effects on this small Michigan town. The film was awarded Special Jury Recognition for Exceptional Intimacy in Storytelling at SXSW, where it was among the feature documentaries in competition.

David Siev, the filmmaker, is one of three children of a Cambodian immigrant father, Chun Siev, and a Mexican mother, Rachel Siev. The family members, in addition to Chun, Rachel and David are Jaclyn and Michelle and their significant others, Michael Meinhold (Jaclyn’s husband), and Michelle’s fiancée, one of the few Black residents of the small town. David’s girlfriend, Kat Vasquez, is also peripherally involved. The impetus for filming his family’s struggle to keep the family business afloat during the pandemic, a restaurant known as Rachel’s Food & Spirits, this: “It’s an important time in history right now. I just want to document it”

I could really relate to this impulse, as I had the same motive when I began following the presidential candidates across Iowa (and, ultimately, across the U.S.), during the historic presidential election of 2008. My journey led to two books, while David’s yielded this award-winning documentary.

The backstory of Chun Siev’s escape from Cambodia during the Killing Fields genocide of Pol Pot contributes to the drama, as he lived through that tumultuous period between the ages of 15 to 18 and then, with his mother and his 5 siblings, escaped to the U.S. In Michigan the grateful new American began building the American dream, first establishing a donut shop that eventually became Rachel’s Food & Spirits restaurant.

Outspoken sister Jaclyn is too feisty to remain silent during the Black Lives Matter protests that followed on the heels of George Floyd’s murder in Minneapolis, Minnesota. Jaclyn graduated from college in Michigan and got a corporate job in Ann Arbor, but she has come home to help her family during this crisis. As the family members say, “Everything we are afraid of is happening.” At the time of the filming Michigan was 5th in the nation in terms of diagnosed Covid cases and 7th in terms of deaths from Covid-19. As Rachel says, “Who would’ve ever thought that a virus could put this whole world into a halt.”

Now, the restaurant, by state law, cannot open and the family is trying desperately to pivot to carry-out. While having its worst day in 5 years. “Our whole lives just changed,” says Jaclyn. However, the family once had 7 people in a house with 1 bathroom. As the family patriarch says, “When you grow up knowing what it’s like to have nothing, you’re always afraid of going back.”

Chun reminisces about his Cambodian family’s flight from his home country, which began on April 17, 1975. Yet Chun—who witnessed cold-blooded murders in the streets as the locals were told to leave the cities—says that he is more afraid of the pandemic, as he is afraid of losing one of his family members. There is a tense confrontation with some anti-mask locals and the police have to be summoned when the anti-mask diners refuse to wear the masks that the establishment has required. There is another tense interaction when Jaclyn stands up to members of a neo-Nazi militia group that come to the Black Lives Matter demonstration and, later, begin following her as she leaves work after locking up. The police are called on that occasion, also, and it leads to the discovery of a far-right militia training area nearby. Jaclyn astutely points out that the community has the attitude, “We’ll support you if you stay quiet and act the way we want you to.” She receives a letter from a local detailing how the letter-writer will not be returning to their family restaurant, primarily because Jaclyn has spoken up at the BLM demonstration.

Still, the family says, “It was never an option to give up” and urges each other to “appreciate the little things in life.” Although at times we fear for the safety of young Jaclyn, Chun knows his way around guns and taught Tai Kwan Do for 37 years.

By the film’s end, David’s attempt to capture time in a bottle has dealt with the pandemic, racism, genocide, and PTSD. Jaclyn and her husband have announced that she will be having the family’s first grandchild and the couple is moving back to Bad Axe to help  run the family restaurant.

Much like “Facing Nolan,” the ultimate message of the film is the importance of family. The documentary will help memorialize what we all went through between March of 2020 and the present.