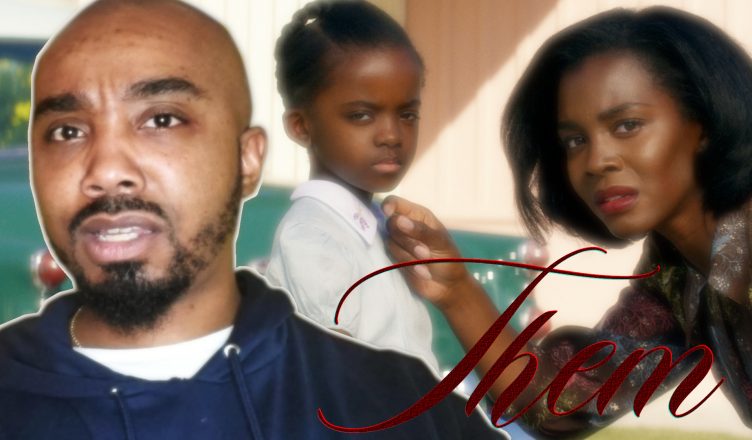 This next episode doesn’t start with a flashback and I’m a little surprised. It may not start with an all out revealing flashback but we do have some tender moments of Lucky thinking of her son.  And then fast forwarding to Lucky having another incident with her neighbors. She catches one of the neighborhood boys peeing on her sheets hanging on the clothesline. With this happening so soon after the dead dog incident the neighbors don’t know what to think. 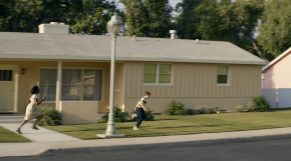 Lucky feels like she’s being baited and has no idea that the neighbors have nothing to do with the death of the family dog. And I don’t think I touched enough on the death of the family dog but this is the result of what seems like the Henry home being haunted by monsters. But we can talk about that in the comments. She has such a stressful day that she decides to go visit family in a black neighborhood. When she goes to visit you can see the energy change, the mood change, the music change, Lucky seems to come alive full of energy and joy.

Lucky deserves a break and has had it pretty rough in this neighborhood. I’m glad to see her there at first until her family starts asking questions about life in Compton. Specifically people ask about Lucky’s son so now we know its not just us. nobody knows what the heck happened to that boy. She is under a lot of emotional stress and decides to leave but what happens next is interesting with Lucky getting attacked by the ghost monsters while riding on a bus. 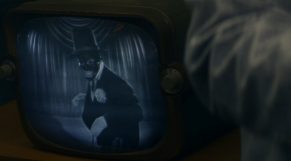 Henry buys a TV since his boss was talking about TV’s. I don’t know if he wanted one until he heard his boss talking about it. It’s in this moment that he first sees the minstrel man in the black hat. He takes the moment to take a jab at the tv salesman after he says something slick. I don’t fully understand but I’m starting to suspect that the minstrel man is the inner rage of Henry and he shows himself when Henry is going through a really stressful moment. I think. I could be completely wrong. We didn’t see him when Henry was confronted on the roof by his neighbors and he certainly was stressed the hell out. Now I would have loved to see that fight between Henry and his neighbors. I believe Henry is tough but he’s also in a very tough situation.

Betty gets a lot of development in this too. Betty spends a lot of time with the Milk Man which is a little surprising. Their little flirting is cute and shows the Betty is desperate to escape her situation. Betty seems to be hiding a lot of trauma and I can’t wait to see it all revealed. She’s wound up so tight that it’s clear that she’s trying to live up to someone else’s image. She does have her own motivations and they come through strong when she encourages the neighborhood to take action against the Henry’s. She inspires the neighborhood at their neighborhood meeting and inspires them to get more drastic with their actions to burn the lawn and and hang dolls on their porch. 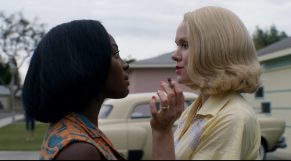 Seeing these things happen to the Henry is deeply disturbing. Like what the actual AHHHH. And then Henry tells his kids to keep their heads high and ignore the actions of the neighbors. Turn the other cheek. This is incredibly disturbing that he’s not taking action about the inherent danger his family is in. Lucky ain’t with the shit and immediately identifies and recognizes the ringleader in this situation and approaches Betty. I love this moment between Lucky and Betty as these are 2 fierce actresses and they give us a wonderfully tense and juicy moment.

He’s put under further stress at work. That whole thing with the dude dropping the pen pissed me off and then the fact that there was a whole party that Henry wasn’t invited to? I mean, that happens, and I’m not even mad at Henry for crashing the party and taking the initiative to make a relationship with the boss. What’s interesting is that this doesn’t happen until the man in the black hat shows up for Henry and does a little dance, kinda re-enforcing the idea that this man in the hat is the personification of Henry’s stress made real. Unless it’s not. This is hard to understand and I hope it pays off at t he end. 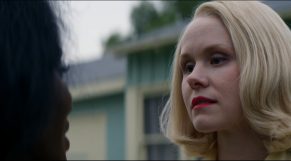 Betty spending more time with the milk man. Shes starting to confide in him since her husband is never home and she keeps dangling the cookie in front of him if he decides to take some initiative.

It’s interesting that Betty went to Uncle Phil’s house to ask for money. It’s not really uncle phil’s house but it certainly looks like the house from the fresh prince of bel air. This whole moment is also a little disturbing in that Betty goes to visit her father who don’t know shit about her! He don’t know where she’s been, how long she’s been gone, and really doesn’t give a fuck. He seems like a happy alcoholic until Betty asks for money for her to move out of her neighborhood. Then the mood changes and he’s all like “Yeah, you ready to do some thangs for this change?” and Betty was not with the shit. So she’s the product of sexual abuse by her father? I knew she had some trauma in her, and im not just talkin about the jabs from her mother, this is real serious deep rooted trauma and I wonder if it has antyhign to do with her inability to conceive.

Anyway like I said, Betty aint with it and bounces empty handed, returning to her husband all defeated.

Am I the only one that suspects betty’s husband is cheating with a black woman? My dude is coming off like a man with options, he definitely don’t care too much about what’s happening in this house.

Lucky decides to get out the house again but this time she goes and visits the other black family that moved to compton. Things seem nice enough and it seems like Lucky may be able to find someone to befriend… until you look closer… and you realize there’s something really really wrong going up in here. I noticed immediately that over Lucky’s shoulder is a picture of the two sons. Nah, lemme be real, the first thing I noticed was all that plastic wrapping up that furniture. If you grew up anything like I did then the plastic wrapping up the furniture was a staple in your living room. I can still smell the plastic just thinking about it! Anyway, there’s something really really wrong about this Ella Mae lady that Lucky met. And she confirms as much when she mentions the man in the black hat! And her husband looking all crazy! And the bloody kitchen with the boys in the oven! Compton done drove this poor woman insane!

Ruby is suffering at school. This poor girl is the only black girl in the school with all the other students ostracizing her for being different. Surprisingly Ruby does make a friend at school in another girl named Doris. She met Doris in the principal’s office after poor Ruby has probably one of the most infuriating moments seen on screen in a while. I recently saw a short film, Play it Safe, that reminded me of this scene but there are striking differences.

I find it really interesting that Ruby and Doris sneak into the basement of the school and find some staff having sex. What’s even more interesting is when Deborah reveals that she has had sex before and begins to help ruby put on some makeup. And then we get the biggest WTF moment when we find out that Deborah aint even real, she’s a figment of poor Ruby’s imagination. So that means Ruby was sittiing in there imagining stuff by herself. Did she go into the basement? Did she see that couple having sex? Did she have sex before? Why is Deborah a monster? WTF is going on here?

Tuvoc! Shout out to my all my Deep Space nine fans who love this casting!

Yeah, these were a wild couple of episodes. I’m enjoying the writing so far and all of the hidden meanings in the hallucinations of the characters. What do you guys think of this show so far? I see a lot of chatter online about how a lot of people aren’t feeling some of the messages of the series. Are you digging the show or nah? Anyway, that’s all I have for this one, if you liked this video do me a big favor and please please please click that like button and if youre new to the channel make sure you subscribe.

The Falcon and the Winter Soldier | Episode 5 Review

One thought on “Them Episodes 3 and 4 Review”