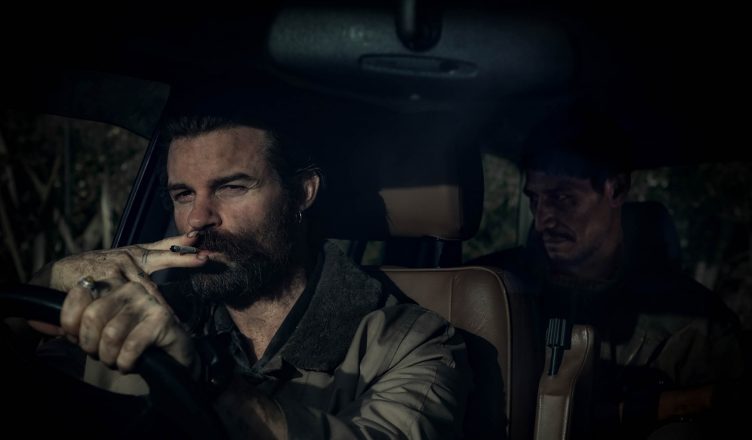 The New Zealand offering “Coming Home in the Dark,” from Director James Ashcroft unleashes a fast, high-energy road trip with a family that is set upon by two psychopaths with a grudge. The short story of the same name, written by Owen Marshall, was altered by Ashcroft and screenwriter Eli Kent, who had already adapted another of Marshall’s short stories prior to this feature film premiere outing.

The 93-minute film never loses its edge and, despite the warnings about graphic violence, it was far from “Saw”- like. But, yes, there IS violence. A fair amount of it, administered by an executioner with nearly impeccable manners, but no mercy.

As the director explained in a brief message to the press at Sundance, the two screenwriters, working together, tried to incorporate historic New Zealand issues as background for the main character, the father of twin boys, who has been a teacher in a variety of schools. These were touches that the original short story character lacked. Alan/Hoaggie, is well-played by Erik Thomson, but Mandrake (Daniel Gillies) was astounding as evil incarnate.

The film opens with a beautiful sunset in the New Zealand countryside. It is worth mentioning that the feature film comes full circle at film’s end with that same beautiful panorama, only, this time, at sunrise. The circularity of structure is something I’ve enjoyed in films by Spike Lee and Brian DePalma over the years, and use in my own writing. There are many deft cinematic touches like this, including the failure of wife Jill to take her husband’s hand in the car, after she has just learned some disquieting news about his past. She remarks, “There is a difference between doing something and letting it happen, but they live on the same street.” The  beautiful shots through strands of grass by cinematographer Matt Henley were outstanding.

The family of four—Alan, Jill and their twin teenaged boys, Jordan and Maika—are off on holiday when they stop alongside a gorgeous but remote New Zealand hillside in the Greater Wellington Region for a hike and a picnic. Ominously, two drifters appear on a cliff overhead and wave at the family below. It is not long after that a confrontation occurs.

Alan—known as Hoaggie—the father, and Jill, the mother, reassure their twin teenaged sons that it will be all right if they just give the men what they want. All of  them promptly do so, divesting of their cash and valuables and every phone but one that Jill took from Alan and put in the glove box of their car. But will it? Will giving the tall Maori-tattooed silent man known as Tubs and the shorter thug, who calls himself Mandrake, what they want save all their lives? At one point, a panel truck drives into the area where the confrontation is happening, and Mandrake instructs the family to wave in a friendly fashion. The paneled truck departs, honking back, and Mandrake remarks, “Later, this may be the point where you’ll wish you’d done something different.”

The film quickly spirals into the road trip to hell.

The shots through New Zealand grasses by cinematographer Matt Henley were gorgeous, as were the sunrise/sunset scenes over a glorious New Zealand landscape. I’ve been to New Zealand, and, yes, it really looks that beautiful.

The acting by Erik Thomson, as the father, and Miriame McDowell as the grief-stricken mother is matched in acting chops by the intensity of evil radiating from the two criminals, Tubs (Mathias Luafut) and Mandrake (Daniel Gillies.) Ashcroft uses the taller of the two assailants, played by Matthias Luafut, to good effect and Mandrake (Daniel Gillies) is the worst thing you can encounter at a picnic in the wild: a polite psychopath.

Ashcroft, from Aotearoa, New Zealand, was the artistic director of the indigenous Maori Theatre Taki Rua from 2007-2013 and his native name is Nga Puhi/Ngati Kahu.  This is his first feature film, but he has plans to move in the direction of Blumhouse horror films. This thriller is a great start.

The film is slated to stream on HBO Max. Check it out. It was the best of 6 feature films I’ve seen at Sundance in the past 2 days.