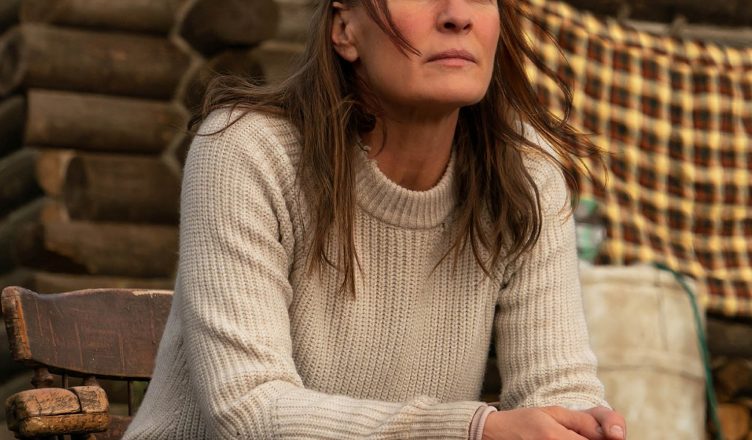 Not only did she direct the piece, but she starred in it. Her co-star was Academy Award nominee Demian Bechir, nominated as Best Actor in 2011’s “A Better Life.”

That sounded promising, as did the involvement of Liz Hannah, who wrote the screenplay for “Long Shot” and “The Post.” Maybe Liz Hannah was part of the original plan, but the credited writers for the film are Erin Dignam and Jesse Chatham and there is no sign of Ms. Hannah on the finished product. This is unfortunate, since the plot has almost nothing happening, is disjointed, and really drags.

Cinematography was by veteran lensman Bobby Bukowski, who helmed both “Arlington Road” in 1999 and “The Messenger” in 2009. He does good work with the wilderness and explained how he worked in a previous interview:

“As soon as a director asks me to be with them, I’m really happy to engage them, no matter if I’m working or not because, when a director is making a movie, it’s the most important thing they they’re doing in their lives, and I like to show the spirit that I’m committed and involved as much as they are.

What attracts me to do a movie is the story, along with my curiosity for how human beings operate – human behavior. So I sit down with a director, and before we talk anything about visuals, I really want to understand, ‘Okay, what are you trying to say? What is the purpose of telling this story?’ And then we can start breaking things down, what is the integral component of the scene this narrative accomplishes. ‘Oh, to show the alienation of this character? Great.’ So now we start talking about alienation, and how we can fit it visually, compositionally, lighting-wise. supporting that narrative element.” (IMDB.com)

This was a beautifully filmed movie, capturing Alberta, Canada—a stand-in for Wyoming— in all its glory. Bukowski has done his job well. “Land” is a gorgeous advertisement for visiting this primitive wilderness area.

But the story that the movie attempts to tell is dull and illogical.

At the beginning of the movie a very stressed-out Robin Wright, as Edee Mathis, is being urged not to harm herself by her sister. We don’t know why she would want to harm herself and it isn’t for quite some time that we learn the true nature of her loss.

Edee lost her husband and her small son in a senseless shooting. We learn quite late in the film that Edee was a lawyer, although there was little in the early parts of the film that would reveal this. I did recognize Chicago as the city Edee wants to flee. Very late in what passes for a plot we learn that Edee’s husband and child were shot at a concert. It receives almost no screen time, by way of explanation.  She’s not dealing with it well. Understandable.

While we all have the urge to flee in troubled times, who goes to the remote wilderness and doesn’t even have a car to bring in much-needed supplies? Or a decent bathroom? Or a real bed? The cabin that Edee selects in the wilderness is so remote and so primitive that it would kill most of us; it nearly kills her. But for the intervention of Demian Bechir, Edee would have died in the primitive cabin she has selected for her “escape.”

I understand that Robin Wright’s goal was to make a film about someone trying to find a way to learn to live again while facing tragedy. It took 2 and ½ years of her time and the deadline was pushed back a year by the advent of the pandemic. A movie about resilience in the face of adversity certainly is timely. The protagonist’s reasons for leaving the big city (“It’s really difficult to be around people because they just want me to be better.”) is all well and good, but, despite her direction of several episodes of “House of Cards,” this film is slow-moving and never goes anywhere.

It’s a beautifully photographed tribute to the great outdoors, complete with an encounter with a large brown bear that would have driven most of us back to the city in record time.  “Land” was shot in 29 days at 8,000 feet across four seasons with the occasional sporadic blizzard interrupting filming and some lessons learned about chopping wood by the stars.

It’s a very pretty movie, but it has three main flaws:

Rating:  3 out of 10 (primarily for the landscape, the acting, and the bear)