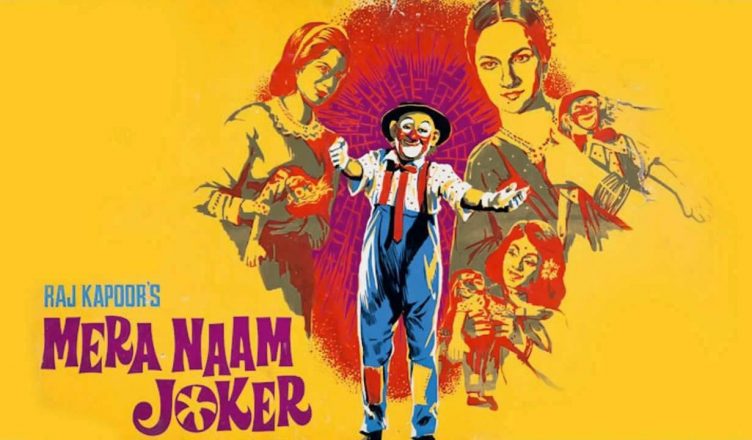 The quintessential Bollywood film Mera Naam Joker wasn’t well received by its audience at the time of its release. The plot and length of the film was criticised by everyone. The negative reception of the film put director and actor Raj Kapoor into a financial crisis. However, with time, people have come to appreciate the film a lot. It’s now regarded as the ‘misunderstood masterpiece’.

Mera Naam Joker (1970) or My Name Is Joker is about the hardships faced by a circus clown and how he still manages to put a smile on people’s faces. The story is told in flashbacks as he remembers the three women he loved through his lifetime.

Mera Naam Joker cannot be remembered without Raj Kapoor. Kapoor was both the director and actor in the film. During its production, Kapoor was already one of the most beloved actors of Bollywood. Ironically, his most well-known film was also the biggest flop during its time.
Raj Kapoor’s acting had a kind of finesse which only a few actors have been fortunate enough to possess.

The plot of this film was one of its kind. Centred around a circus clown, Raju, the story focuses on the three significant partners of Raju through his lifetime. The film is divided into three chapters, each focusing on a different part of his life- Childhood, Youth and Old Age. The story is capturing, engrossing and so well formed that one cannot help but fall in love with the script.

The songs are a huge part of Bollywood. In Bollywood, every film is a musical film. Mera Naam Joker is no different.

With nine songs of total forty-six minutes, this film has a HUGE soundtrack. While most of its songs are pretty well-known in India, the most famous is probably ‘Jeena Yahan Marna Yahan’. This song is played numerous times in the film and is also its title track. The translated lyrics of the song go something like this:

If you think these lyrics are sad, you are in for a long ride.

The reason why this film was earlier rejected is because of its time length.

This film is four hours long. It was one of the only two Bollywood films to have two intervals.

Other than Gone With The Wind, this is the only four-hour long film I have watched. I have to be honest, it became a bit tedious after a while. I like to watch movies in one sitting, but it was almost impossible to do so with this film.

Does this film require a bit of patience? Yes.
Will it be worth it? Definitely.