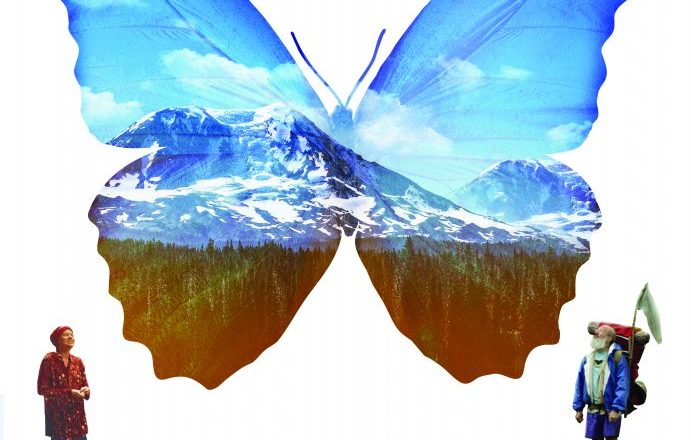 Director and writer Tom Putnam has adapted the book of lepidopterist Dr. Robert Pyle titled, “Where Bigfoot Walks: Crossing the Dark Divide and created a big screen masterpiece named The Dark Divide. For adventure enthusiasts this film is a must watch.

The trailer for The Dark Divide is beautifully shot and gives a clear picture about the movie. It showcases Dr. Pyle’s adventurous journey during the summertime of 1995 across the huge Gifford Pinchot National Forest in search of a new butterfly species. He was persuaded by his dying wife Thea to do so. We have David Cross playing the role of Pyle and Debra Messing as his wife.

The trailer has funny punches in between where Pyle’s tedious journey has been portrayed in a comical manner. He has been shown carrying a huge red backpack and an oversized net trying to catch butterflies and almost falling off a cliff. What’s more, he got lost during his journey. It shows Pyle’s funny encounter with animals and human beings in the forest. Once he almost runs into a bear. It has been portrayed in a funny manner but bear encounters aren’t that funny at all! Not to mention the hardships he faced in the thunders and lightning while trying to find shelter in his little camping tent. The mythical creature called Bigfoot has been associated with The Dark Divide region, although we never see one in the trailer or film. In the trailer is one incident where Pyle gets mistaken as a Bigfoot by some people and almost gets shot. Funny but scary!

The trailer depicts the notion of getting lost and finding oneself, which Pyle did. The film has been named “The Dark Divide” as in that region only Pyle had made his life changing discovery. It also stars David Koechner, Gary Farmer, Cameron Esposito and Patterson Hood.